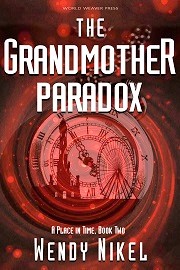 It is all about family in Wendy Nikel’s sequel “The Grandmother Paradox,” book two in her A Place in Time novella series. Agent Chandler is living the good life with his adopted son Dodge in the 22nd century when Dr. Wells pays him a visit. Chandler, immediately concerned for Elise since he is no longer an agent, asks Dr. Wells why he has traveled to the future. Assured by Dr. Wells that Elise is alive and well, the question then arises as to why he needs Chandler’s help. Dr. Wells promises answers, but first they need to travel to the 21st century to prep Chandler for his new unofficial assignment.

After a brief rundown of events, Dr. Wells outlines why he believes TUB (Trial Undertaking Bureau) is on the move to prevent the destruction of the Colony by targeting Elise’s great-great-great grandmother Juliette Argent, who mysteriously disappeared at one point according to Dr. Wells’s genealogical research. Dr. Wells wants Chandler to travel to 1893, find Juliette and keep an eye out for TUB agents looking to kill her, effectively ending the catastrophic events Elise triggers. Owing Elise for his new life, Chandler agrees to help and finds himself back in time.

Nikel covers a lot of ground and introduces new larger-than-life characters without weighing the story down. Even when Chandler finds Julliette rather easily, there are plenty of crazy situations that get complicated, as life in the late 19th century is full of surprises and dangers. When TUB agents start canvassing the same territory things get even thornier. Packed with action, drama, comedy and final revelations, Nikel’s new chapter is an extraordinary continuation of her time travel universe.

Sometimes your future depends on saving the past and breaking some rules. Wendy Nikel’s novella, “The Grandmother Paradox,” is Book Two in her A Place in Time series. We follow Chandler as he’s recruited by Dr. Wells to go back in time and protect his savior from Book One, Elise, from being wiped out of existence by TUB—the Trial Undertaking Bureau—agents targeting her great-great-grandmother. When Chandler arrives in 1893, he has one task: protect Juliette Argent from time-traveling assassins. However, the more he gets to know Juliette, the more difficult he finds it is to keep emotional distance. Nikel provides a wonderfully detailed snapshot of life in the late 19th century, replete with colorful side characters and historical nuggets that bring the scenes to life.

Overall, it’s a simple tale, which seems counterintuitive when viewed through the lens of time travel paradox. “The Grandmother Paradox” stretches itself on romance splendidly, but, I believe, fell a bit short as the climax begins and ends quite suddenly for a story this length. Where it shines, however, is in the period descriptions and is worth the read if only for that.

Mike Wyant, Jr. is an ex-IT guy, who has finally committed to a writing life out in the Middle of Nowhere, New York.