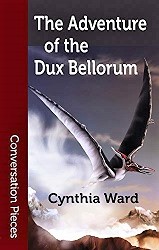 The Adventure of the Dux Bellorum

“The Adventure of the Dux Bellorum” by Cynthia Ward is a sequel to the author’s previous novella “The Adventure of the Incognita Countess.” Both stories feature Lucy Harker, the daughter of Mina Harker and Dracula, from Bram Stoker’s famous novel. Lucy is a dhampir. She drinks blood and has the other characteristics of a vampire, but retains her soul. She works as a secret agent for the British government in the early Twentieth Century.

Set during World War One, this story deals with Lucy’s assignment as a bodyguard for Winston Churchill on the Western Front. Churchill is kidnapped by wolfmen. With the help of her lover, the vampire Clarimal, Lucy faces a number of natural and supernatural challenges as she crosses No Man’s Land in order to rescue Churchill. She also solves the seemingly unrelated mystery of the disappearance of a number of young women.

An important subplot is the relationship between Lucy and Clarimal. Readers skilled with anagrams will quickly realize that Clarimal is none other than Carmilla, from the novella of the same name by Sheridan Le Fanu. Clarimal became a vampire when she was killed by an undead victim of suicide. She also lost her soul at the same time. Because her dhampir lover has a soul, Clarimal fears that their love affair will condemn Lucy to Hell. Clarimal’s self-sacrificing desire to leave the woman she loves, and Lucy’s desire to remain with her, provide as much of the story’s tension as the pair’s suspenseful adventures.

The author makes use of many other characters and themes from fantastic literature of the late Nineteenth and early Twentieth Centuries. In addition to Stoker and Le Fanu, reference is made to works by Arthur Conan Doyle (Sherlock and Mycroft Holmes, as well as Professor Challenger), H. G. Wells (The War of the Worlds and The First Men in the Moon), Edgar Rice Burroughs (tales of Pellucidar), and even such unexpected sources as Agatha Christie and Ian Fleming. Less familiar to readers of English is Fantômas, the master criminal created by French writers Marcel Allain and Pierre Souvestre. Most of these disparate elements work well together, but some are out of place. In particular, clear references to the universe of James Bond early in the story seem inappropriate.

Besides Winston Churchill, other historical personages appear. Catherine Hilda Duleep Singh, an English-born suffragette of German and Indian ancestry, plays an important part. In real life, she lived for many years with the German governess Lina Schäfer. The story presumes they were lovers, and their relationship provides a parallel to that between Lucy and Clarimal.

As if all this were not enough, a classic Mad Scientist and his evil inventions are also involved in the plot. In general, the author manages to keep the many different aspects of the story in balance. The style is clear and readable. The tone is a mixture of a serious account of characters in desperate situations, and a tongue-in-cheek romp through well-known literary themes. At times it seems like too much of a good thing, as the reader is distracted from the story while trying to keep track of all the allusions to history and fiction. All in all, this mixture of steampunk and gothic horror is enjoyable entertainment.

Victoria Silverwolf had to look up the phrase “dux bellorum.”