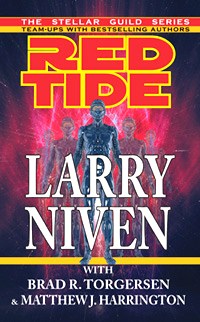 “WELCOME TO THE STELLAR GUILD. In every book we’ve combined a new novella by an established star with a novelette or novella—a prequel, sequel, or companion piece—by a protégé of the star’s own choosing.”—series editor, Mike Resnick

While I love the concept (and for the first time two protégés), the results didn’t work as well in this iteration as I had hoped.

Right up front, I’ll tell you I love Larry Niven’s writing. Always have, right from the first time I read his stories involving Louis Wu, Gil Hamilton, the Protectors, Nessus, Beowulf Shaeffer, or any of the other zillion characters that jump off the page. Astute readers will notice a pattern evolving in the list—all of them involve his solo writing. No collaborations necessary. Niven has to be one of the only writers in history whose work is lessened by adding another Very Smart Author to the mix. It’s inevitable, of course. Zeus doesn’t really need Apollo’s help in his endeavours, and the poor fellow would probably just get in the way. The good news is that there is no real collaboration in the stories here. The bad news is that the writing seems to suffer from mere proximity.

For this project, Niven decided to lengthen his original “Flash Crowd,” renaming it “Red Tide.” Other than an unnecessary prologue tacked on that offers little more than back-story, the only other changes are cosmetic; i.e., changing Bailey’s offer of “thirty-five hundred bucks” for the rights to Jerryberry’s story to a more modern-sounding “thirty-five thousand.” There’s also the addition of a baffling love story subplot that was hinted at in the original, but was left open-ended. This version attempts to complete the connection, and feels forced. For those interested in Jerryberry’s history, the prologue is short and mildly informative, but it simply wasn’t needed. The original story was practically perfect as it was published in 1973. I always thought of Niven’s writing as the SF equivalent of Hemingway—tight and clean with no wasted verbiage. Skip this one and read the original.

Now this is more like it! Niven’s second entry, “Dial at Random,” does what he does best—look at a new technology (either real or imagined) and attacks it from every possible angle to expose its flaws or highlight its use. The invented physics of the transfer booths of these stories is well-known, but there is always another avenue to explore. This story takes us to the early days of Robin Whyte’s Transfer Booth technology, and deals with a simple problem of conservation. Young Hilary Firestone is about to become an unintended guinea pig in an unscheduled experiment in long-distance teleportation. And all it takes is a bent credit card.

“Sparky the Dog” by Brad R. Torgersen is the most “Nivenesque” of the two stories by the protégés. Ostensibly another “Jerryberry” story, the character is used mostly as a wrapper for a tale about Robin Whyte and the very beginning of JumpShift Inc. Dr. Whyte tells the story of the day at Lightspeed Labs he placed his wife’s dog, Sparky, into a Transfer Booth prototype to demonstrate its safety. The dog promptly disappears, but does not reappear in the receiving booth across the room. Since, by the physics that determine the function of the booth, this is not possible, Robin follows the dog to see where it went. What results is a nice tale of mystery, intrigue, and betrayal. Very well done, and recommended.

Matthew J. Harrington, with “Displacement Activity,” crafts a far-future story in the Flash Crowd universe. With the chance discovery of an alien flicking into, then out of, a transfer booth using a personal JumpShift-type device, a committee of JumpShift Inc. Directors, including recently retired engineer Samuel Watt, discusses the ramifications of people and items lost in transit. Since any booth is capable of receiving from anywhere, conservation of momentum applies, and without the ability to shunt the energies involved with someone arriving from the galactic center, Watt suggests constructing a station dedicated to these arrivals in the cometary halo. On an inspection tour of the station, Watt is thought to be having a heart attack and an attempt is made to send him to a hospital on Earth through the Transfer Booth. What happens, instead, is he becomes lost in transit for over sixteen thousand years. In that time, the station has grown to gargantuan proportions, with a population in the billions, and Earth is a burned-out cinder due to the sun’s expansion. In other words, this is a Big Story in a little package.

Now, there are some problems that could have been alleviated with some editing. First of all, even though this story was written recently, there is talk of “Soviets” and the KGB as if they were contemporaries of Watt. While I could write that off as trying to hold to the political events consistent with Larry’s story as written in the 70s, there’s simply no reason to do that. And at no point in all of Niven’s writing in this particular universe is there a hint there might be parallels (or none that I can recall) so, therefore, since the stories are supposed to fall within the same universe as the original, the passages about the “Soviets” don’t make sense. From here the story meanders into musings about how socialism=bad, and corporations are always altruistic. Ayn Rand would be proud. Added to this is the notion, demonstrated twice, that it’s perfectly okay to belt someone in the jaw just because you disagree with what they are saying, and we begin to stray even farther into political territory.

One of the best things about Niven’s writing over the years (distinctly outside his collaborations) is that I could never get a handle on his politics. Look, I get it. It’s okay to discuss politics in a story, just be honest about it—and it better be an essential part of the narrative. Don’t slide it unnecessarily into a story that doesn’t require it. Added to the fact that this story never really goes anywhere—doesn’t even try to answer some of the interesting questions raised—and as a reader I’m left feeling cheated. Choosing just one of the plot points and focusing on that would have yielded a far better read for me.

I wish I could recommend this book. While two of the four stories do much to further the Transfer Booth universe, one is a diminishing of a previously great story, while the last is just a mess.