Paranoia and the Destiny Programme 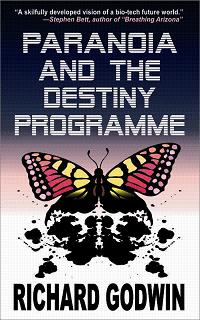 This is the first work I’ve read by Richard Godwin, and I’m not sure I’d read anything else. Not that it wasn’t well-written and well-executed, but it goes to some very dark and disturbing places, and I don’t think I want to dwell in such locales. However, for those who like stories exploring the nether side of humanity, this short novella fills the bill.

The story takes place in a totalitarian state, run by a group of people known as The Assembly. It is told in an almost stream-of-consciousness style, through the eyes of Dale Helix, who works in a bank and is married with two daughters. He is manipulated by The Assembly, who force him to kill people, but all he wants to do is play the piano. His wife doesn’t believe him when he talks of The Assembly and their program.

Or is his wife a psychologist who is trying to treat his paranoid delusions, and The Assembly is only a panel of other doctors who want to help him? As we see the world through Helix’s eyes, we are never sure what is real and what isn’t. His experiences are bizarre and full of psycho-sexual imagery. He is either really sick or living in a really sick society — it’s hard to know which is more disturbing.

Godwin’s prose marches inexorably on, pulling us deeper into this truly Kafkaesque world. Shocking images blast the reader almost constantly, helping to create the shattered world that Helix experiences. There are shades of 1984 or Brave New World here, and even a bit of the classic TV show The Prisoner, but this novella is much darker. It is not for the faint of heart.

[Ed. Note: The book can be purchased in paperback by clicking on the title at the top of this review. To purchase a digital edition click here.]