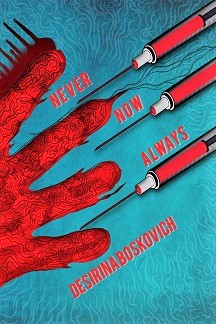 Allow me to begin by warning you, the reader, of how beautifully complex this novella is. I encourage you to treat this story like the finest scotch, (or whichever expensive spirits you prefer): small draughts, taking your time, enjoy the flavor and the subtleties, and mull over it before going back for another taste. When I would make drinks for friends or clients, I would always warn them if the particular spirit was complex enough to be worth savoring, that going through it too quickly not only wasted the liquor, but wasted the experience. The same holds true here. With my thanks for indulging this preface, your review.

No time or specific place is specified throughout the entirety of this novella, beyond that of “now” and “the Labyrinth.” If you pay close enough attention, it’s clear that time and space are of little consequence, or even importance, to the story. It simply isn’t bound by the restraints of the fourth dimension, any more than the characters within. The title tells you everything you need to know, all pared down to the most simplistic understanding possible, which is all that is left to the poor souls whose memories (or lack thereof) are contained within those pages. These things that you are reading about, these lives and these memories, have never happened. Yet they are happening now, and will always happen, as surely as life will blossom and death will claim that life. This represents the sum complexity of the single most influential, existential thought in my intellectual sphere: the concept of eternal recurrence. For those not familiar with it, it is the concept most often described thus: “All of these things have happened before, and all of it will happen again.” You may have heard it on a TV show or movie, a book you once read, or in a passing conversation. You may never have heard it at all, and find that somehow it resonates with you all the same. I won’t speak for anyone but myself, but I have found in my own studies and experiences that the concept is pervasive throughout human history, thought, and expression, yet seemingly overlooked by those whose minds have not been exposed to it, even if it were right in front of them. It’s a phenomenon that fascinates me almost as much as the concept itself. This novella expresses the cruelty, the mystery, the longing, and the sorrow of eternal recurrence so beautifully it’s at times agonizing. The triumphs of remembrance and identity, dredged up from oblivion at ever so great a personal cost and effort, only to be washed away like sand castles amongst the tides a moment later, and the pain of knowing that something has been forgotten, taken from your mind, so thoroughly that you cannot remember that which has been taken, or even observe it via the shape of the emptiness it left behind, for all you have is emptiness.

The story follows Lolo, mostly, as well as her sister Tess, and Gor, whose relationship to Lolo seems to fluctuate. By the end, it seems as though he is their brother, though upon being reduced to their “starting” state of no memories he again appears to simply be a somewhat close friend. Such analysis of relationships is entirely dependent upon identity, something they are constantly denied. Even Lolo’s knowledge that Tess is her sister is completely and wholly subject to obliteration at the hands of the collectors. Since little is shown from his perspective, it is difficult to know just what he knows, but it is clear at several points that he retains information that she does not, and may even be slightly more resistant to the constant memory deletions. To be honest, although it does state that they are human in one specific point in the story, everything is so obscured by the haze surrounding our characters’ minds that they need not even be human. The statement that leads one to believe they are human is almost incidental in the account of the “Voice,” who is explaining why the memories are being taken, that humanity reached too far into space and saw something they shouldn’t have, “something they would rewrite everything, all minds, all lives, all history not to know,” and that all of this, the Labyrinth, the Caretakers, the memory deletion, is all some sort of necessary response. My point is that it needn’t necessarily even be humans. It could be any race out amongst the stars, and that the race of the characters, be they human or alien, is largely irrelevant. To quote the Voice, “You’re all the same to me.” For the sake of ease, I continue to refer to them as human, but the point still should be made, because it is so central to the nature of the atrocity that has been inflicted upon them. These children *have no identity*, and could hardly argue if you told them they were from Alderaan, or Martians, or hairless apes. The very nature of who and what they are has been torn from them, and even the much-vaunted tenacity of the human mind is here but an ineffectual grasp at empty air, allowed or denied at the whim of the Voice. The sheer gravity of it all is manifested when the Voice answers Gor’s outburst of “Why didn’t you stop us?” The voice simply replies “Because I get lonely sometimes.” It is nothing short of crushing that a human being, a soul, a person is reduced to nothing more than a plaything at the whim of this “caretaker.” It is agonizing to realize the abject powerlessness and helplessness of what is left of humanity, less than even rats in a maze. At least the rats get to keep their memories, and are rewarded for accomplishing tasks. Even such simple, basic needs as identity and risk/reward interaction are denied to these individuals. It is control, on a scale and level that even the most tyrannical dictators could merely hope in vain to achieve. The darkest thought that haunts me is that it isn’t even that hard to imagine, and that there are those of us who avidly dream of achieving a state like this, as if it were some beautiful ideal to be achieved. The concepts are fairly straightforward. It is only a lack of technological prowess (and what little remains of our collective cultural and societal beliefs in morality and restraint, though I have so little faith in the future of these as to discount them entirely) which halts us from inflicting this fate upon ourselves, without the intervention of some hitherto-unknown entity as the Voice and the Collectors.

This is, after all, what Transhumanism seeks to overcome, this technological barrier that forcibly keeps us human due to insufficiently advanced technology as to eclipse the human condition. And perhaps it is even true that this imposed vacuum of memory is benevolent in nature, for which I find several grounds and references to in the story, (specifically regarding the dialogue I mentioned previously about why the memories were stolen,) but I am comforted none by it. Are you familiar with Clarke’s Third Law, that “any sufficiently advanced technology is indistinguishable from magic?” There is a corollary, (albeit in regards to artificial intelligence, which may not be as divergent from this story as one might think…) published by Charles T. Rubin, which states that “any sufficiently advanced act of benevolence would be indistinguishable from malevolence.” Most of that which is professed by the so-called “liberal transhumanists” could be classified, at best, as hopelessly naïve, but far more realistically categorized as malicious deceptions designed to deprive any individual other than themselves of the right to think, choose, and act accordingly in response to actions taken against them. It is the blatant theft of the right to Be, for no other reason than to preserve the ability of the transhumanist to indulge in any whim they desire. Despite the often vacuous claims and insincere protestations of the transhumanists, Rubin’s corollary cuts deep across the heart of the deprivation of identity that is at the core of this novella. To borrow (paraphrased) from the eighth chapter of Rubin’s essay Medical Enhancement and Posthumanity, “While at first transhumanism appears to aim at the health, wealth, and longer lives of the human race, a deeper look uncovers the reality that reconstructing what it means to be human will change the meaning of these goals in ways we cannot now comprehend, and that this willful ignorance is deliberately covered over by transhumanism’s obsession with diversity, a belief that is inevitably consistent with human extinction, and inextricably linked to Nihilism. The willingness to support certain acceptable human standards of life over others for personal gain ultimately illustrates the nihilistic aspect of transhumanist norms.” It is reasonable to expect that, benevolent or malevolent, any such deprivation of basic human expectations and existence, such as memory and identity, regardless of reason or justification, can only end in such a situation as this novella describes. That is, after all, if not the goal of Nihilism, (for it could easily be argued that the very existence of nihilistic thought precludes it from having goals), is most certainly the only outcome it is capable of achieving. I am firmly convinced that transhumanism is nothing more or less than the last resort of minds who have bought into and accepted nihilistic realities, and is their response to the crushing despair it represents. I am humbled by the breadth and extent of what the author has done with this novella, that concepts like eternal recurrence, along with warnings against nihilism and transhumanism are so evident within words so carefully crafted as to appear to be the simplistic, struggling, and uncertain words of identity-less children robbed of even basic understandings of time and space. Please, take the time to read this story, then read it again, and then again. There is a depth to which it speaks that is linked to the meaning of what it is to be human, and to Be, and I am confident that a thoughtful mind will only benefit from repeated exposure and deliberation.