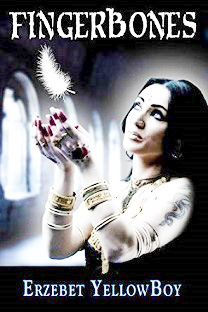 Fingerbones by Erzebet Yellowboy is a novella told from the points of view of two different women. The first is Nusht, who lives on the island of Karbesh. Inhabited by a group of women left there two or three generations ago, Karbesh’s sole connection to the mainland is visits from mute boatmen who come regularly to have sex with those women willing, and to remove any boys born of those encounters. These women suffer from an inevitable wasting sickness that has killed all their mothers and grandmothers.

Nusht, who is experiencing the first symptoms of the sickness, sees that disease as a pattern that they are trapped in. She craves a breaking of that pattern, and this desire finds an outlet in small constructs she randomly makes with driftwood, seaweed and fishbones from the beach. Oddly enough, these constructs seem to come alive when she makes them—moving of their own volition, and when she adds feathers, some of them actually fly. She doesn’t understand how this could happen, but she continues to make them, as they symbolize a way out of the pattern of inevitable death they exist in. She makes her constructs, she visits her mother’s grave, and she prays.

Fairka is the second focal character of the story. As a child, she was caught trying to steal and had her fingers cut off. Since then, she has had an educated, comfortable life with the priests—comfortable except for the fact that her sole purpose is to serve as a sacrifice when she comes of age. That time is now, and she goes to her execution brimming with resentment, fear, and an overwhelming desire to live.

This latter feeling is what she has in common with Nusht, and it’s what binds their paths together. One of Nusht’s flying bird-fishbone constructs somehow makes its way into the temple. The instant before Fairka receives her lethal injection, it touches her hands, and a miracle occurs—her fingers burst into existence, fully healed.

She is saved, but only for more indignities, to be subjected to endless research and examination—especially when it’s discovered that her hands now have the power to heal any illness or injury on anyone else. This prison is exchanged for yet another when next she is kidnapped and sold. Fairka dreams of vengeance, of bringing plague upon her wrongdoers, as she tries to find a way out. She struggles with both the physical walls and locks that restrain her, and her own naivete about what people are like and what they are capable of. Life keeps showing her that her path has to do with being “mindful of all that we have yet to discover, and to improve upon that which we have.”

Fairka’s and Nusht’s stories alternate chapters, and slowly their fates are drawn together, until they come full circle in a way that feels complete, if somewhat bittersweet.

This novella is very well done. The characters feel alive, and I was moved by both women’s predicaments without the use of obvious melodrama in the story’s plot points. The writing is even-handed and subtle, with the same sort of inner beauty each of these women exhibited. Fairka is defiant, short-sighted but with strength; and rapidly weakening Nusht has a tenacity to her vision that is fueled by wisdom and compassion. Each woman is hobbled by something they cannot control, and this story shows how they find their peace within a greater matrix of life.

This is a strong, beautiful, yet sobering story, one that isn’t escapist despite its fantastic elements. Personal power cannot overcome fate or the natural limitations of the cycles of cause and effect that shape the patterns of the world. Layers of meaning enrich and deepen a story that made me think and feel and take a little of its flavor into my world, once I emerged from its pages. It’s not usually what I consciously look for in reading, but when I find it, I truly appreciate it.