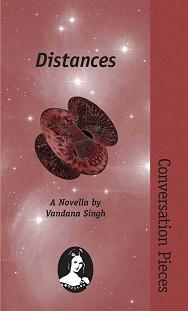 a novella by Vandana Singh

“Distances” by Vandana Singh is aptly named. This handsomely produced, perfect-bound chapbook from Aqueduct Press is about distances of many kinds–physical, mathematical, emotional, and cultural. The protagonist is far from home dealing with culture shock and a sense of distance from everyone else around her because of her specific background and gifting. She is alone in many ways at the beginning of her story, and we come to find out how that sense of alienation grows in her life throughout the novella.

But don’t let me sell this novella short. It is not just a symbolic and personal character study, it is much more than that. For those who like science in their science fiction there are cutting edge mathematical equations dealing with the 11 dimensions of space/time. If you are a romantic there are various emotional entanglements that deal with all kinds of love–love of self, love between mothers and daughters and romantic love amongst a group of five people. If you like stories that take place on other planets, with a number of unusual cultures intermixing and a group of off-world researchers in for a visit (perhaps from a future Earth) then this novella is for you.

Intensely and lyrically written, this is the story of a woman named Anasuya who lives near the ocean on a world not unlike Earth. Her culture is fascinating and allows for special attributes called athmis. Anasuya’s athmis is the understanding of mathematical harmonies. She sees and experiences all the mathematical underpinnings of the world.

It is this gift which eventually brings her to work in the Temple of Mathematical Arts which is situated around the world from her home, and it is here she meets the visitors from another planet, who ask her to explore wholly new mathematical equations they cannot understand.

The various culture clashes between the off-world researchers and Anasuya, given her unique background and the desert land she now inhabits, are extremely well handled.

Anasuya is an isolated soul, regardless of her surroundings or circumstances. We meet her as a green, gill-slitted woman from a far-off sea community living now in a land of desert, with gods and customs completely different from her own, and which is but one of the several ways Singh illustrates Anasuya’s separation from her world.

Singh fleshes out her tale by granting the reader glimpses of Anasuya’s past life, while immersing the reader in her current state of perpetual alienation, though her “pentad” of lovers tries mightily to assure her of their love.

Nevertheless, Anasuya is constantly fighting her own inability to fit in. The distances that reside within her own soul are too wide to bridge the distances with other people, save for momentary flashes. She only feels at home when exploring the world of mathematics. Her gift is augmented by being immersed in an amnion fluid that allows her to visualize and virtually live within the equations that she is trying to understand, and it is here, in these fractal patterns of mathematical conjecture that she finds the peace and freedom to be herself, untouched by the outer world beyond. But even here there are problems that need to be solved and confusions needing resolution.

Individual sections illuminate and provide a rounded backdrop to the whole, until by the end of this finely layered novella I felt as though I had met a fully formed human being—not to mention a number of fascinating characters—and all with a mathematical conundrum of epic proportions with dire import for the cultures of two planets.

“Distances” is a richly rewarding experience. Vandana Singh is relatively new to the genre, having seen published a mere handful of popular and critically acclaimed stories in the past few years. If you’ve not yet encountered her work, “Distances” would be a fine place to start.