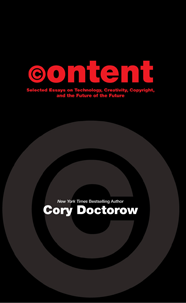 Content: Selected Essays on Technology, Creativity, Copyright and the Future of the Future

Hugo nominee Cory Doctorow’s new book, Content: Selected Essays on Technology, Creativity, Copyright and the Future of the Future (downloadable here in e-book form), offers a collection of twenty-eight pieces he produced as journalist and activist in 2001 and 2007, ranging from a talk he gave to Microsoft’s Research Group on Digital Rights Management in 2004 to articles he published in periodicals as varied as The Guardian, Forbes, and Asimov’s Science Fiction.

As the title implies, Doctorow’s focus is on the issue of intellectual property, and in particular, the collision between old ideas about how copyright should work, and the realities of new digital media. Doctorow’s position, thoroughly laid out in the opening item, “Microsoft Research DRM Talk,” is that the current intellectual property regime is not merely undesirable (and that from the standpoint of all concerned), but unworkable; and that its continued survival as not only the conventional wisdom, but the legal baseline, is a product of astonishing levels of short-sightedness, political corruption, and totalitarian fantasizing on the part of business executives obsessed by the idea of ultimate control over words and images (a particularly brazen display of which is covered in his article “The DRM Sausage Factory”).

To his credit, Doctorow not only reasons lucidly from an abundance of evidence instead of merely asserting platitudes (as far too many public intellectuals do), but has a clear knack for taking the complex technical, legal, and economic issues entailed in these matters, and presenting them in accessible, engaging, and often highly quotable ways. Adding to the interest of his writing, his outlook combines a genuine enthusiasm for the new technologies with a clear-cut rejection of so much of the “conventional wisdom” regarding it, a standpoint all too rare in these debates.

Furthermore, while Doctorow is writing principally from the standpoint of a consumer advocate, and of course, a professional writer with more than a casual interest in developing new business models, famously giving away his books online for free from 2003’s Down and Out in the Magic Kingdom (a practice he discusses at length in “Giving It Away,” and which would seem to have paid off handsomely for him), he also takes an interest in other dimensions of the issue. Particularly impressive in this regard is his examination of what it was once fashionable to call the “New Economy” in “Happy Meal Toys Versus Copyright.” (“The US traded its manufacturing sector’s health for its entertainment industry, hoping that Police Academy sequels could take the place of the rustbelt. The US bet wrong,” as he puts it with refreshing bluntness.)

In the course of the book Doctorow also touches on a wide range of related topics including his discussion of the online fan fiction phenomenon, “In Praise of Fanfic”; an interview with Ray Kurzweil in “When The Singularity is More Than A Literary Device” (which offers both an easy introduction to Kurzweil’s theorizing about the technological Singularity, and a handy reference for those already familiar with it); the use of ecology as an analogy for the development of the Internet in “All Complex Systems Have Parasites”; an examination of the inundation of our lives by unnegotiated and abusive “contracts” (like the terms of service in Microsoft software), “READ CAREFULLY”; and a comment on the surveillance society in his closing piece, “Snitchtown.”

Since this is a collection (and an eclectic one at that) rather than a unitary volume, there is an occasional repetitiveness in both the ideas Doctorow advances, and the examples he uses to advance them. Additionally, some of the pieces struck me as relatively perfunctory, like his piece on social networking web sites, “The Facebook Faceplant.” However, this is nitpicking in a book well worth the time of any reader seriously interested in the issues which Doctorow addresses, which is likely to be anyone reading a book review off a website like this one.