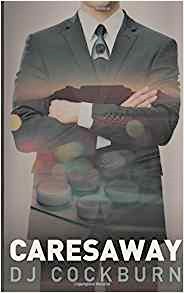 Have you ever taken, or dabbled with the thought of taking antidepressants? If so, this story by DJ Cockburn should prove an interesting and thought-provoking read.

We meet Dr. Edward Crofte at the moment of a great achievement largely brought about by the unintended side effects of the antidepressant he invented, Caresaway. Caresaway does its job too well. Caresaway could make you a psychopath. On becoming CEO of the pharmaceutical company that makes Caresaway, Edward stops his daily dose and only then does he begin to see what he has done.

Suddenly forced to confront his past to save his future, we see through Edward the lengths people are forced to go through to succeed in the modern business world.

DJ Cockburn tells a convincing story and Edward becomes all too relatable as his situation devolves. The ending, whilst feeling somewhat abrupt, will leave you thinking and wondering with as many questions as answers.

I appreciate a solid first paragraph, because in this day and age, when books have to compete with so many other distractions, I want to know what kind of character I’m going to hang out with for the next 35,000 words. I mean, now-a-days, I could spend this valuable time crying over an atonal Netflix special about spilt milk, or failing at Starcraft games online while jerks yell at me, or pillaging an English village in the name of my ancestors.

DJ Cockburn is a man who knows how to start a story right. Edward Crofte, a strong, cruel, cutthroat businessman, walks into the CEO office he just took over. Cockburn wisely skips the board room set up, and starts the story right where the world’s changing. A new antidepressant, “Caresaway,” has taken the corporate world by storm, and everyone’s using it as a performance drug. Has Caresaway made Edward the “uncaring” man he is today?

We go back in time to find out. At the start of his career, Edward mopes over sad crumbly cake with his first business partner, wondering where he’ll find the cash to fund a drug trial that will legitimize his new anti-depressant. His small initial trial has found a cure for depression in 18 out of 20 people, so it’s promising, but the big companies want trials of 500 people or more. Where can a starving scientist find those funds? Edward’s the polar opposite of his opening scene, compassionately desperate to help people through their most miserable moments. He’s also horribly depressed, and takes his own antidepressant to save himself from suicide, sending himself down the path of its dangerous side effect: psychopathy.

Alas, plotholes hail us. Cockburn writes that Edward consulted a psychologist for five of his twenty study subjects—wait, hold on, just five? How’s he diagnosing a cure for depression for the other fifteen without a psychologist? What, Edward can just download a copy of the DSM-5 on the internet and go for it? If he’s a licensed psychiatrist himself, I’d like to know that. These details don’t destroy the story, but in a scene when Cockburn’s trying to show how compassionate Edward used to be, failure to have a professional diagnose your subjects seems like a cruel oversight, and that definitely wouldn’t fly with any IRB.*

[*Institutional Review Boards determine whether or not your study’s allowed to go forward.]

Psychiatry qualifications were some of my highest marks in medical school, so three months away from my official MD I tend to get a little nit-picky. I also wondered why Cockburn’s scientists used the old, imprecise, and generally unused term psychopath, instead of standardized modern APA diagnoses like Antisocial Personality Disorder (which, actually, is associated with suicide). Furthermore, according to current medical drug naming guidelines, you can’t use real words, or make disease-curing claims, in a drug name: Caresaway does both, and that would never pass a BigPharma marketing and legal team intact. I also found it pretty offensive that Coburn thinks “clinics in the Caribbean” will allow you to create poisonous medications when clinics in the mainland US won’t: did you know that Puerto Rico engineers and manufactures almost all of your American insulin? Some of the best drug manufacturing in the world happens in the Caribbean.

The central driving force of the story relies on Edward getting on and off the Caresaway pill as it causes his psychopathic tendencies to wane and wax, but that’s based on a flawed premise: that a personality disorder can respond to medications like depression can, and that psychopathy is naturally depression’s opposite extreme. It’s not that simple. Personality disorders remain one of the most challenging frontiers of modern psychiatry because they don’t respond to medications: depression medications, which usually regulate neurotransmitter levels, cannot address the rigid neurological pathways associated with personality disorders. To cure a personality disorder you need to change those fixed pathways. While there are some rigid thought patterns associated with depression that can be addressed by techniques like Cognitive Behavioral Therapy, current successful treatments for mood disorders focus on regulating imbalanced neurotransmitters, not changing neural pathways.

What does this mean in lay terms, and why do I care so much about this small mistake? This Edward guy is basically fixing his broken leg by stopping his pain medication. Sure, the broken leg and the pain are related, and sure, certain pain meds definitely slow healing time—maybe he even broke his leg as a “side effect” because he was drowsy on his pain meds! But you need your leg set after it’s broken. Like a rigid personality disorder, it won’t fix with a pill change. I wouldn’t normally care about details like this, but the oversimplification of mental illness’s relationship with medications promotes dangerous misconceptions about the power of drugs.

So should you read Coburn’s story? Let me say, right now, after I’ve been this huge condescending jerk and all, that Cockburn’s excellent pacing and characterization more than compensate for flaws in his pre-writing research. He doesn’t overdescribe. His writing’s lean and flawless, and his insightful observations of people’s personalities fit his main character like a well-sized surgical glove: everything’s smooth and tight, and it makes me want to dive right in and get bloody.

Above all, Cockburn’s true gift lies in his pacing. He alternates sections about psychopathic, powerful Edward, and weak, depressed, pre-Caresaway Edward with confident deftness. This is actually very difficult to achieve without creating a sense of interruption in either plotline, and Cockburn syncs the journeys of both Edwards perfectly. Refreshingly, he didn’t just take one Edward through a downward spiral while thrusting the other on a meteoric rise: both end up meeting in the middle as Edward struggles to escape depression while avoiding psychopathy. In the end, I do wonder why Edward never attempts any other individualized treatment for his depression: what about blending motivational therapy, psychoanalysis or CBT, with medications like SSRIs or SNRIs, or any of a whole slew of natural treatments like exercise, B6, or St. John’s Wort? Ultimately, however, the story’s finish was satisfying. The science fiction “what if” is solid and intriguing, and the novella certainly sparks discussion about meaningful current issues, which to me is one of the central tenants of this genre. I’m not comfortable with the author’s conclusions, but objectively, this is a well-written work crafted by an excellent writer whose talents I would like to emulate.

For the few hours while you’re reading, it might even take your Caresaway.

Jen Finelli is a world-traveling scifi author who’s ridden a motorcycle in a monsoon, escaped being locked in a German nunnery, discovered murals and poetry in underground urban caves, explored jungles and coral deserts, and hung out with everyone from dead people and prostitutes to secret political influencers and Senators. She is finishing up her MD in Ponce, Puerto Rico, and will be working as a full-time doctor near Austin, Texas starting in June.