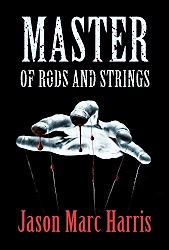 Master of Rods and Strings

The narrator of “Master of Rods and Strings” by Jason Marc Harris relates his life from early childhood to young adulthood. When he was a little boy, his older sister went away with a man, said to be their uncle, to learn the art of puppetry. He discovers the cruel way the man uses his sister to give life to the puppets. Sworn to avenge his sister, yet fascinated by the magic of puppetry, he develops his own skills, leading to a final confrontation with his enemy.

This brief synopsis provides only a hint of the many twists and turns in the plot, and of the many strange and intriguing characters that the narrator encounters. The story begins quietly, and slowly develops a growing sense of horror, reaching a truly apocalyptic climax. The setting, several locations throughout France, is vividly realized. Perhaps the most compelling aspect of this expertly crafted tale of terror is the way in which the narrator changes from an ordinary boy into a man capable of performing great evil in his quest for revenge.