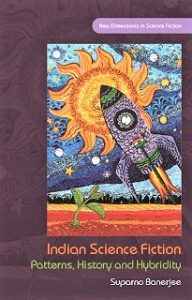 The text under review is an academic work and will be considered in that light.

In this volume Suparno Banerjee weaves together the many threads of Indian Science Fiction tracing various themes from the first SF stories in India to contemporary efforts. Using his chapters as organizational nexi, Banerjee brings a logical structure to what at first appears a chaotic listing and relisting of texts. The chosen organizational approach allows for multiple readings of texts in order to better fit them into his theoretical framework. The work is comprehensive, with well argued schema as well as effective close readings of texts. One emerges from the book feeling that they have had a previously closed door opened, and yet also humbled by the scope of materials still to explore. Banerjee uses a post-colonial theoretical lens as the central mode of understanding the texts discussed. While the application is clearly pertinent, it does, at times, limit his exploration of the texts since the conclusion is often a foregone one. Perhaps this is an inevitable consequence of the need to create a meta-structure around which to organize the book. Below is a brief chapter by chapter summary and evaluation follows.

In the introduction Banerjee attempts to address the thorny problem of how we define Science Fiction. Using Suvin, Freedman, and Rieder as a springboard he moves to how these difficulties are addressed in an Indian context. He discusses how the two major camps, Science Fiction as SCIENCE or as a more open concept, interrelate in the context of India’s colonial past as well as its ancient traditions. The author ultimately uses Freedman’s idea of ‘cognitive estrangement’ to create a wider envelope in which to consider his topic.

Banerjee also highlights the difficulties inherent in defining “Indian.” Given the historical changes in territory, cultural and linguistic diversity of the modern state of India, and the current Indian diaspora. Finally, he discusses the reality that Science Fiction in India develops through multiple linguistic traditions and so his organizational scheme is more thematic in order to better address this complexity. The remainder of the introduction contains a detailed description of the contents of each chapter.

The first chapter provides a detailed and nuanced chronology of the development of Science Fiction in India, tying it to the country’s history, mythologies, colonial experience and other identity forging elements. In discussing the early creation of SF, Banerjee identifies three forms: future histories, adventure tales, and stories with scientific elements (23). The discussion starts by locating early SF stories “A Journal of Forty-Eight Hours of the Year 1945” and “The Republic of Orissa: A Page from the Annals of the 20th Century” within their historical context, with a special focus on how both stories deal with the concept of a rebellion against the colonial British. He also connects the influence of Western education and literature to the development of early Indian SF. Discussing the first ½ of the 20th century (1905-1947), the author highlights the creation of utopian fiction in this period stressing that they are “products of the interactions between the modern Indian mind and European modernity” (31) as well as its entrance into popular reading habits.

The third period, post-independence to 1995, is marked by the rise of SF in multiple languages and its increasing popularity in the public sphere, including in TV and film, and the frequent theme of “the subversion of the established world order” (41). The author singles out the work of Premendra Mitra as an example of this tendency. The last of the time periods discussed brings us to the contemporary period with a focus on a globalized multi-media Indian SF. The author cites The Calcutta Chromosome by Amitav Ghosh with its Arthur C. Clarke award as a pivotal moment that encouraged an international facing, English language surge. Present in this new wave are a new international focus, boundary blurring into the larger speculative fiction genre, and a recognition and investigation of cultural hybridity; specifically the purity / hybridity debate that Homi Bhabha contends is core to postcolonial societies (51).

The second chapter covers the epistemic systems that form the core of Indian SF. The initial discussion on knowledge and spheres of knowledge is excellent, including observations about writing from Fredric Jameson, questions of scientific vs metaphysical knowledge from Karl Popper and others. This entry into the chapter is invaluable in situating the reader as Banerjee focuses on his topic. He argues that we can see three main categories in knowledge production in India, Science, Vedic, and Folk (64) and contextualizes these forms of knowledge within India’s colonial history. He then provides multiple examples of each in Indian SF. The following discussion of how these three categories interact is broad but buttressed with numerous examples and a multivalent analysis. The author also addresses texts that deal with history but lack the clear ideology of the previous two categories.

Chapter three deals with time, memory and attempts to represent pre-colonial, colonial, and post-colonial India according to the author’s understanding and political stance. One of these approaches is an appeal to a pre-colonial Golden Age that feeds a narrative of a return to a “better” India. Another approach is what Banerjee terms Subaltern discourse. In these stories “the past that is presented […] is subversive of colonial hegemony, without falling in line with the dominant forms of nationalism” (104); with Vandana Singh’s “Delhi” presented as a good example of the sub-genre.

The second part of the chapter is dedicated to future visions. One of the author’s key concerns is how Indian SF deals with a post-colonial present and how that present is framed within future oriented world building. He further subdivides this into positive and negative visions with examples of each provided. The author then directs his attention to representations of the present, and non-linear or multi-path timelines.

The following chapter focuses on utopian discourse. The author starts with a discussion of the representation of space within Indian SF and its connection to ideological and post-colonialist narratives and he uses the ideas of Tom Moylan and Ralph Pordzik regarding representations of space as he delves into his topic. Banerjee does an excellent job of describing and analyzing the symbolic use of space in Signal Red and Escape where he convincingly argues for the central importance of space as a symbolic representation within each text. He then turns to travel narratives and ties them to colonial viewpoints but is not as convincing as in the earlier part of the chapter.

The final chapter of the text considers the role of the Other. Starting with post structuralist discourse and moving through Said, Banerjee then moves on to how India Others western and other identities, including class, caste and power structures. He uses these ideas to present the ideas of Indian SF producing discourses about “the alien/Other as the self, and the alien/Other as the Other” (164).

The author concludes with an overview of the many languages of Indian SF and the challenges that come with what he dubs first language bias (192), that is the tendency to favor texts that are more linguistically accessible. This relates to the role of English in India and the use of English as the language of international commerce. The book ends with a review of the arguments of each chapter as they connect to the author’s discourse on post-coloniality and third space considerations.

Indian Science Fiction is a valuable and significant work that is broad while managing the difficult task of providing nuance and focus on a diverse and challenging literature. Highly Recommended.

Robert Turner is a Spanish professor at the University of South Dakota with an academic interest in Science Fiction.