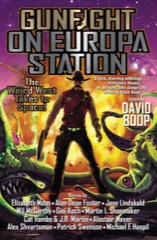 “The Penultimate Stand of Pina Gracchi” by Michael F. Haspil

“Winner Takes All” by Alex Shvartsman

“Last Stand on Europa Station A” by David Boop

“Riding the Storm Out” by Martin L. Shoemaker

Gunfight on Europa Station is an anthology that brings together the Western and the SF genres. This is a mash-up that should work well, as many plot tropes—such as the ‘just few’ squaring up to the ‘unjust many’, and survival at a frontier—are common to both horse-opera and space-opera stories. Indeed, the most famous SF film franchises have borrowed heavily from the western genre, from Gene Roddenbury’s self-described “Wagon Train in space” (Star Trek) to the clear western influences seen in Star Wars. And, like the classic space opera stories of old, the intent in this collection is for the reader to kick back and enjoy the ride; the stories’ focus here is to entertain and excite, as opposed to challenge and educate.

The anthology starts with the entertaining short story “Greenhorn” by Elizabeth Moon, in which the author offers several surprises. Ostensibly about a raw ‘greenhorn’ space cowboy who is taking up a new role as a ‘rancher’ of space rocks. Moon plays around with the wild-west themes humorously. Ranchers ride ‘rockethorses’ in zero-g to ‘corral’ rocks, and greenhorns are expected to ride the horses poorly. All is not as it seems with our protagonist, however, and Moon offers more than just a rather silly cross-over story both through her inventiveness and the twist at the end (borrowed from a famous western movie, and which I should have seen coming, but didn’t).

“The Penultimate Stand of Pina Gracchi” by Michael F. Haspil is a well-paced novelette that borrows from the Magnificent Seven theme of a small band of gunslingers supporting local workers against a tyrannical larger force. The plot is quite well crafted, and it is likely to entertain, though the storyline is a little simplistic and derivative perhaps. It’s a fine line—and doubtless a difficult one to tread—to write a pastiche of a western without it being simply a derivative tale.

“Showdown on Big Rock 27” by Gini Koch is a space opera novelette set within the asteroid belt, where families mine rocks within their ‘claim’ of space. As in many a John Ford style western, one family is beset by rogues who would take their ‘claim’ under force. Enter the Galactic Police, who must come up with a plan to free the family and defeat the space pirates. It’s a simple tale but fun, and quite well told.

“Hydration” by Alan Dean Foster manages to be both the least ‘western’ but also the best story to this point in the anthology. The western connection is simply that the protagonist is a precious crystal ‘prospector’ on an alien desert world. When she has an accident deep in the waterless wastes, she has a surprising encounter. Foster is arguably the most famous name in this anthology, having written dozens of successful novels and short stories in a career spanning more than 50 years, so its perhaps not surprising this is a superior tale. The woman’s predicament provides good tension, and the inventiveness of the resolution is striking.

“Winner Takes All” by Alex Shvartsman is a ‘frontier’ story with only limited connections to the western genre. It is an enjoyable and quite imaginative SF tale, however. A forensic accountant has tracked down the location of a political criminal to a far-flung colony world, and wishes to capture her. The task is made more difficult by the presence of ancient alien interference devices that surround the planet, preventing any use of electronic technology. The ideas here are good, and it’s an entertaining story.

“Last Stand at Europa Station A” by David Boop is a super SF short story. It perhaps qualifies as a western genre-styled piece due to the frontier nature of the action, but the connexion is a little strained in that regard. It is nonetheless one of the best stories in the anthology. A medical examiner is sent to live and work at a colony under the ice of Jupiter’s moon Europa. When a body is found in a workspace duct, he and the local security officer must investigate the death. The story takes some interesting turns and offers both suspense and exciting action.

“Riders of the Endless Void” by Cat Rambo & J. R. Martin essentially revisits the ‘gun for hire’ trope, with the newly arrived, and highly capable, defender of a family playing a reluctant hero, in the ‘Shane’ mould. The story itself is not bad, but it is presented with a touch too much naivete and sentiment to really impress.

“Seeds” by Patrick Swenson starts out with an intriguing premise; an old widower who lives on a small farm on a distant world is visited by a salesman who attempts to sell him a seed-planting device. The old man wants none of it. The pastoral setting and the old man’s sense of tradition and values in the face of change and ‘progress’ is enticing and reminiscent of much of Clifford D. Simak’s fiction. Unlike Simak, however, the tale doesn’t conclude convincingly, and the reader is left wondering what the message really was.

“Riding the Storm Out” by Martin L. Shoemaker is a short story set on Mars, featuring a police chief who is transporting an organised crime boss overland in a Mars-crawler, to face trial. The need to shelter from a dust-storm en route leads to challenges. The story is relatively engaging, although, like several other stories here, the link to the western genre is rather tenuous.

“Incident at Raven’s Rift” by Alastair Mayer is a further ‘frontier’ style story, in which the use of western tropes (including gunfights in a dry and rocky landscape) are more obvious than in some other stories to be found in the anthology. The story itself, involving a ransom demand for an archaeological treasure is okay, but is not the most interesting story on offer, as it plays out pretty much exactly as one might expect without providing much surprise or novelty.

“Claim Jumped” by Jane Lindskold is the last story of several in the anthology to be played out in an asteroid belt, featuring ‘prospectors’ of a sort. Here, the association with the western genre is that the protagonist refers to her spaceship AI as ‘Mustang’ and they exchange horse-related banter accordingly. This seems a bit forced to enable inclusion in the anthology, and the tale itself is not especially engaging. A miner is convicted of murdering his business partner but swears his innocence. His wife goes in search of evidence to support his claim.

“Doc Holliday 2.0” by Wil McCarthy satisfyingly concludes the anthology, with a jaunty SF tale that connects more tightly than most to the western genre, as it features the ‘reprinted’ historical figures of Doc Holliday and Wyatt Earp. The story is set on Mars, in a future where anyone who dies can be reprinted by fax with the results known as the ‘faxborn’. Holliday and Earp have been printed to work for a mining company, to protect its assets from a criminal gang. The prose is bright and entertaining, and the ideas are interesting and thoughtful, making this a superior piece of fiction. The story poses the questions: should one’s past actions be judged by the moral standards of the present day, and are there immutable laws of morality? There’s more here than just great entertainment.

It’s perhaps worth noting that with only a few exceptions, the ‘weird west’ elements of the stories in the anthology (as cited on the cover) are not that overt and titling the book “Frontier SF” would have been quite as accurate. The end result is an enjoyable selection of hard SF stories that consistently entertain, with several that are really rather good. Indeed, for fans of hard SF, who enjoy tales that focus on entertainment over those that present current socio-political points, this anthology should satisfy. However, if you are attracted by the cover of a cowboy in full wild-west regalia, take heed that this is a somewhat disingenuous image—a picture of a spaceship in an asteroid belt would have been more representative.