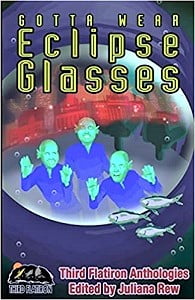 “Living As You, Our City a Garden” by Christopher Muscato

“The Thirteenth Floor” by Robert Bagnall

“Catcher in the Sky” by Paul A. Freeman

“The Centaur Detective and the Vanishing Man” by Patrick Hurley

“All Fuzzed Out and Fractal” by David Cleden

“SoulShine” by Koji A. Dae
“Ashes to Ashes” by Chloie Piveral

“Interview with a Zombie” by Ville Nummenpää

The theme of this anthology is “the future we’d all like to see,” and it features optimistic and bright science fiction and fantasy stories. To support readers and friends during the COVID-19 pandemic, Third Flatiron is offering the eBook for free to anyone whose discretionary reading funds are tight.

The opening story is “Living As You, Our City a Garden,” by Christopher Muscato, in which two youngsters are living and playing, and breathing, under the sea. We learn that they are the descendants of humans who modified themselves to survive underwater, away from the polluted and depleted land. At the start of the story they embark on a trip to the “great city,” which has been built into a coral reef. The world-building is stunning in this story, doing an excellent job of bringing the underwater world to life. However, the ending, though optimistic, is rather sudden and left me with a slightly unfinished feeling.

Next is the “The Thirteenth Floor,” by Robert Bagnall, in which an office worker named Alison investigates the mysterious thirteenth floor of her building—apparently unreachable by elevator and seemingly unoccupied. Not entirely a new idea in the horror genre in particular, but this is science fiction and the reveal is somewhat different, and more positive. This is an interesting story that turns some common tropes about big business, and banking in particular, on their head.

“Just Like Living with Dad,” by Jenny Blackford, is about a woman whose father has died. Her daughter, his granddaughter, is taking the loss particularly badly. To make things even worse, one of the family goldfish is also on his last, er, fins. And then something rather strange happens. It’s a sweet, gentle and rather lovely piece.

In “Catcher in the Sky,” by Paul A. Freeman, Dr. Geraldine Dynes explains her carbon catcher to the Minister of Climate Amelioration. This story has a dark little twist in its middle that gives it a nice punch.

“Such Sweet Sorrow,” by Gustavo Bondoni, tells the story of a boy named Felipinho and the giraffe, Bruno, he’s helped to raise and which is now about to be released into the wild. As a coming-of-age tale it plays out rather as one might expect, with no great surprises, and really not very much in the way of a speculative element beyond some airship travel.

“The New Mutants,” by Angelique Fawns, begins by telling us that when the world remade itself, it became one big Battle of the Bands. The protagonist tells us that she was a bookworm introvert in her previous life, but confesses this has now changed. This is a fun piece that really puts the battle into Battle of the Bands, but it also has something important to say about putting aside differences.

“The Centaur Detective and the Vanishing Man,” by Patrick Hurley, begins with detective Thato Choudry interviewing a suspect who has committed a very peculiar crime. He’s not entirely alone in this task, however, because he has a police-issue AI inside his head, called Sammi. This is a fun, engaging and clever little detective story with a satisfying ending. I hope to see more of this crime-solving duo in the future.

In “All Fuzzed Out and Fractal,” by David Cleden, we’re introduced to Surita Nair, who tells us her troubles began when she turned her boss into a warthog. It might sound like fantasy, but it is science fiction: Surita has used an augmented reality filter to make her work life more bearable. So we find ourselves in a world where no one has to face reality, unless they choose to. This is a lovely story with a compelling main character that will really make you think about how we look at the world and what our priorities ought to be.

“Give Me My Wings,” by Eneasz Brodski, begins with two sisters: Marie, and Judy—the point of view character. Judy is outgoing and loves life and the world; Marie is more introverted and keen to live online, and beyond. This is an interesting piece that explores two different perspectives without, as is so often the case in such stories, judging either. Perhaps there’s room for both, after all.

In “Tabula Rasa,” by Emily Martha Sorensen, Ally wakes up in what appears to be a hospital room after a skiing accident. Only, it’s not exactly a hospital, and she hasn’t, exactly, woken up. The ethics and morality of the particular issue here have been covered elsewhere, of course, but this is a refreshing take, although it does still leave the reader with some dark questions.

“SoulShine,” by Koji A. Dae, is about a woman named Tish who is a ‘Chaser’—someone who hunts creatures in a virtual world that’s overlaid on our own (Pokémon GO being the obvious reference). She heads off early one day to receive an upgrade to the game, but it turns out to be something very different. This is a well-crafted story that plays with the idea that games like Pokémon GO encourage positives, such as outdoor exercise, and ramps it up to another level. Indeed, there’s almost a sense of coming full-circle.

“Ashes to Ashes,” by Chloie Piveral, is, as the title might suggest, about death. The main character was born on a spaceship, in space, and has never set foot on a planet. The piece deals with her Great-Grandmother’s funeral, and our young protagonist’s attempts to process what has happened. It’s a gentle, sweet story with a moving ending that will crack the hardest of hearts.

“Lighter than Air,” by Liam Hogan, features an alien invasion. The A-Gees, as the humans have named them, are aero-gel-based lifeforms that have built floating cloud-cities on Earth and are quietly cleaning up the Earth’s atmospheric pollution. They are, it turns out, fans of human social media, and have invited a vlogger, Jess, to visit and make contact—something with which scientists and governments have had little success. Throughout the piece, Jess learns more about the A-Gees and finally begins to understand them. The aliens are beautifully described, and it’s a fascinating concept, but for me this suffers somewhat from the fact that Jess’s character is purely an observer. I wanted her to emerge from the experience more changed.

“The First Day of Winter,” by Mike Adamson, features a standoff between two characters: Kira and Damien. Kira is there to stop Damien from destroying the Parasol—a huge sunshade, thousands of kilometers across, designed and built to bring down Earth’s out-of-control temperatures. The story raises an interesting question: having thoroughly messed things up, should humanity strive to put Earth back the way it was, or should it instead leave the planet to find a new balance? The ending comes down hard in one direction, but nevertheless this piece will leave you with something to think about.

“We Make Life Beautiful Again,” by Alexandra Seidel, is an epistolary piece (in the form of emails and text messages) about a space-junk-recycling robot AI named Scrama and her—they had a poll and decided on ‘her’—interactions with a quantum computer named TruMind. This being an anthology featuring positive stories, you can imagine that this doesn’t go down the Skynet route, but instead ends on a delightfully positive note. I, for one, welcome our new robot overlords.

“War’s End,” by Neil James Hudson, begins in a deliciously disturbing way: “We have finished with war. But something’s coming anyway.” The something, it turns out, is an alien race called the Centaurans, but their approach is not the focus of the story. Rather, this is about how humanity has stopped violence by implanting pacifier chips in people which, as the name suggests, calm violent impulses. The main character is seeking revenge, but everything is not quite as it appears. The piece cleverly juxtaposes small, personal conflict against a large, possibly planetary, one, and I very much enjoyed it.

At the start of the flash piece, “The Plumber,” by Matt Tighe, the main character is dismissed as merely a “technician” by the rest of the group in which he finds himself. Perhaps not surprisingly, he turns out to be far more useful than they imagine. This is well-written and fun, but as someone who’s worked with technicians of different types for many years I couldn’t help railing somewhat against the idea that scientists would ever do such a thing. Technicians are amazing and laboratories, schools and scientific institutions in general absolutely couldn’t function without them (have I sucked-up enough, do you think?). Anyway, I had no problem with the human-reptile-arachnid-DNA creature. That was perfectly believable.

“Interview with a Zombie,” by Ville Nummenpää, is literally a transcript of an interview with a zombie. It’s very silly, and takes joy in poking fun at all the usual zombie tropes. It does end on something of a bleak note, though!

“For Mom: Standup Cosmic Comedy,” by Erie Matriarch, features a young girl who has had chemically coated electrodes implanted in her head by her parents, in order to “integrate new types of senses into the brain.” This sounds rather dark but, as it turns out, the result is that the girl starts spouting corny science jokes. Lots and lots of corny science jokes. In fact, I suspect this entire story was written just for the excuse to include said science jokes. And you know what, I’m here for that.

In “Night Chat,” by John Kiste, Mars settler Douglas Mons has drunk too much “marswort alcohol” and is having a fuzzy, somewhat confused, conversation with two Martians: Lar and Niza. One again, all is, predictably, not quite what it seems. This is a good-humored and upbeat way to end the anthology that leaves us with positive thoughts of travelling onwards. Nicely done.