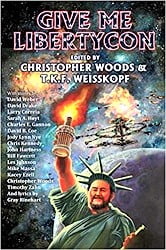 “The Final Mission Of Specialist Astroga” by Mike Massa

“The Liberty Con” by Timothy Zahn

“An Arizona Weremyste In Chattanooga” by David B. Coe

“Liberty For All” by Jody Lynn Nye

“Or Give Me Death” by Chris Kennedy

“The Tuckerizing” by Larry Correia

“In The Details” by John G. Hartness

“For Liberty” by Sarah A. Hoyt

“Heart Of Stone” by David Weber

“Building The Bolgeo” by Les Johnson

“Brandy (Sparker, That Is)” by Gray Rinehart

Libertycon is one of the preeminent science fiction conventions in the United States and one of the last that is fully staffed and run by volunteers. Created by the legendary Richard T. (Uncle Timmy) Bolego, it has continued over thirty years providing a place for authors and fans to interact and learn.

The project started gathering steam far beyond what Christopher had envisioned as writers like David Weber and Toni Weisskopf of Baen books got on board. The passing of Uncle Timmy right before the 2019 Libertycon added a new impetus to the project.

Like Libertycon itself, this anthology is a volunteer effort. No one was paid for their time, their words, or the cover art. All the net proceeds other than the actual printing and publication costs are being donated to Libertycon itself, which is a non-profit, and any excess income goes to charity and a scholarship in the name of Uncle Timmy for the Tennessee Valley Interstellar Workshop.

While not formally reviewed, it is well worth the reader’s time to read the Afterword for additional information.

“Uncle Timmy” is a tribute song by the multi-talented Gray Rinehart highlighting the may ways Tim Bolego touched the lives of science fiction fans. Fair warning, for anyone not a Libertycon alumn or well versed in fandom, the tune may be a bit inside baseball.

“The Bastion” by Christopher Woods is set in his post-apocalyptic Fallen World universe and tells the story of a man with multiple implanted personalities, most of which have things to atone for. The Fallen World gives one plenty of opportunity for righting the wrongs of the bad people who inhabit it. The story is especially good in that it ends on a positive if bittersweet note for the recovery of civilization.

“The Final Mission Of Specialist Astroga” continues the storyline from the Black Tide Rising universe books by Mike Massa and John Ringo, Valley of Shadows and River of Night. I don’t think Mike can write a bad story. This one certainly did not break his streak. Cathe Astroga is one of my favorite characters in the books and, given the high body count of the Black Tide Rising universe, reading the title of the short story I feared the worst. Even though it was the end for Specialist Astroga, the hilarious journey was even better than the destination.

Timothy Zahn is well known for his Cobra series, along with his forays into the Star Wars and Honor Harrington universes. “The Liberty Con” has the hallmark of a good con job. Misdirection in plain sight. You never see the twist in what appears to be the story of a criminal shaking down unsuspecting marks coming. Well worth your time.

“An Arizona Weremyste In Chattanooga” by David B. Coe is a paranormal mystery starring his PI character Justin Fearsson introduced in Spell-Blind. I always hold my breath a bit when a writer sets a story in an area I know very well. Far too often writers get it wrong and it can toss the knowledgeable reader right out of the story. Worse, some writers load so much local color into a tale the story itself is muddled.

Mr. Coe gets it right. From the comparison between the heat of Phoenix to that of Chattanooga to the geography, the writer weaves these grace notes into an engaging story of Fearsson being hired to find a wayward daughter. Like all good mysteries, it doesn’t take long before the hero is wondering who is lying about what.

Bill Fawcett takes a dystopian slant with “Libertycon 100” recounting the tale of the last Libertycon concom striking a blow against a repressive government that had usurped everything that the attendees of Libertycon stand for.

“Hidden, A Fairy Tale” by David Drake is a bit of a departure for those who know him for his RCN and Hammers Slammers series. The sword and sorcery story is worth the journey, chronicling an everyman’s battle against an evil creature that strikes with the full moon. Rather than falling into tropes, Drake’s hero is a kid who was drafted with no greater ambition than to make time with the innkeeper’s daughter. I especially liked the ending as it is more honest than most such stories.

Jody Lynn Nye in “Liberty For All” weaves a hilarious story of the misadventures of a team of government assassins tasked to eliminate Uncle Timmy and Libertycon. The virgin sacrifice scene alone makes the story. Read it.

“Or Give Me Death” by Chris Kennedy is set in Mark Wandry’s Four Horseman universe of interstellar mercs. A down on their luck mercenary company takes on a contract offered by a group of aliens enamored by the American revolution and wanting to create their own.

“Libertycon Oddity” by Gray Rinehart spoofs the David Bowie song “Space Oddity” and is a bit of a send-up of all cons.

Larry Correia ably illustrates why the man was able to buy a mountain from his writing royalties. Anyone who has ever put on a large public event is familiar with the need to obtain insurance to cover the unforeseen. Who do you think provides coverage to Libertycon? Stranger and Stranger of course. In “The Tuckerizing,” Tom Stranger and his hapless assistant Jimmy provide the highest quality customer service in resolving the various interdimensional rifts caused by all those pesky authors tuckerizing the Libertycon staff.

“Partners” by Kacey Ezell & Christopher L. Smith is set in the Gunpowder and Embers universe and tells the story of a pair partnered to play spades who forge a deeper partnership while trying to escape being eaten by giant ants. Well-paced story.

“Open Season” by Charles E. Gannon concerns one of the beloved figures of science fiction tuckerization, Joe Buckley. Well, beloved if affection is measured by the many imaginative ways authors starting with John Ringo have killed him off in stories. In this story of ferreting out alien infiltrators, Gannon manages not only to kill Joe several times in one story but poke fun at himself at the same time.

“In The Details” by John G. Hartness is a well-crafted story about a demon hunter and his guardian angel getting to the bottom of a murder with demonic overtones. The problem is that, unlike David Coe, he didn’t get the setting right. Clarksville, Tennessee is nothing like the small hick town that he describes. For example, its the home of Fort Campbell, where the 101st and 160th Special Operations Group are based. It’s one of the major cities in Tennessee and is almost a bedroom community to Nashville. Perhaps a small thing, but it tossed me right out of the story.

Sarah A. Hoyt’s contribution to the anthology, “For Liberty” is a time travel caper centered at Libertycon and a bit reminiscent of Heinlein’s multiverse and time travel tales. Our hero manages to not only save the day but find herself and place in the multiverse.

“Heart Of Stone” by David Weber is set in the Honnerverse and tells the story of an injured treecat with nothing left to lose finding a purpose and a person in the guise of a young lady.

“Building The Bolgeo” by Les Johnson is the only nonfiction piece in the anthology. Anyone interested in space travel and how we are going to do it will find an excellent analysis of the history and how-to of nuclear propulsion by an actual rocket scientist.

“Brandy (Sparker, That Is)” by Gray Rinehart bookends the anthology with a tribute to Brandy, the daughter of Uncle Timmy and the current con chair. Speaking as one of her minions, it is pretty accurate.