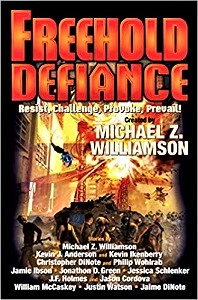 “A Broader Skillset,” by Jamie Ibson

“Trouble in Paradise” by Kevin J. Anderson and Kevin Ikenberry

“Province of Man” by Jaime DiNote

“The Strongest Link,” by Jamie Ibson

“The Bugismen” by William McCaskey

“Fire in the Deep, Angel on the Wind,” © 2021 by Christopher DiNote and Philip Wohlrab

Freehold: Defiance is the second volume of stories recounting the events of the war between the independent Freehold of Grainne and the United Nations of Earth first chronicled in Michael Z. Williamson’s series opener Freehold and his growing number of followup novels, among them The Weapon, Rogue, Angeleyes, and Freehold: Resistance (an anthology). It is unnecessary to have read Williamson’s other books set in the Freehold universe or the prior anthology to enjoy the stories, but those familiar with the earlier works will savor the many Easter eggs scattered through the stories.

Unlike Freehold: Resistance, the stories are laid out in a typical anthology format rather than the mosaic style of the prior anthology.

“A Broader Skillset” is the first of two stories by Jamie Ibson and tells the story of a soldier and family man dealing with the early days of the invasion and is a tribute to evil thinking and field expediency. The reader will never look at manhole covers the same way again.

Jonathon D. Green’s “Health and Safety Enforcement” is a hilarious story of the invaders attempting to bring the joys of regulation and bureaucratic form over substance to a mining asteroid. The residents respond with malicious compliance.

“Trouble in Paradise” by Kevin J. Anderson and Kevin Ikenberry starts as a story about getting home but pivots to an examination of what is more important than personal desires and the price one is willing to pay to do the right thing.

“Solitude” by Jessica Schlenker is an excellent story about how people deal with differing from the human herd. Sometimes the solution is to separate from the herd. Some people think that it is a disability that has to be “accommodated” on one hand but “fixed” with the other. Terrible idea.

Jaime DiNote examines the crisis of conscience of a young officer faced with a commander and senior NCOs engaging in behavior that made the My Lai Massacre look like a misunderstanding in “Province of Man. ” This is a well written but very dark story.

“The Strongest Link,” also by Jamie Ibson, recounts the adventures of a resistance fighter who serves the cause by getting resources to those who need them. The tale illustrates that logistics can be just as hazardous as fighting in the streets. This is one of the stories that has a nod to one of the main characters of the Freehold universe.

Michael Z. Williamson brings back Ripple Creek Security in “Bidding War” where he explores the dilemma of a private security firm trying to stay in business when two of your best clients are fighting each other. The solution is very entrepreneurial.

“The Bugismen” by William McCaskey draws on the history and traditions of the Bugis and the many peoples of Indonesia for the background of his story which illustrates that nothing unites a populace like an invader that attempts to destroy your culture.

Michael Z. Williamson‘s next original story, “They Also Serve…” recounts the fight from the point of view of a working farmer/citizen soldier tasked with the necessary but unglamorous role of reconnaissance of the invading forces. Farm families are nothing if not innovative.

“Replacements” by Justin Watson is a rarity in the Freehold anthologies, a story that casts a UN unit as competent, honorable troops willing to do the right thing even if its bureaucratic masters won’t. Any NCO ever tasked with the care and feeding of a newly commissioned lieutenant can relate to this story.

“Semper Malevolem” by J.F. Holmes and Jason Cordova is a funny story that could be re-titled “Grumpy Old Snipers.” A pair of old soldiers, both relatives and neighbors, try to settle the question of who is the better shot with the invaders as targets. Nice twist at the end.

“Fire in the Deep, Angel on the Wind” is far and away the longest piece in the anthology being a novelette at over 13,000 words. In it Christopher DiNote and Philip Wohlrab explore the idea that in war both sides bleed. A story about caring for those injured in a conflict regardless of the uniform they wear.