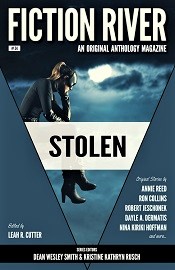 “The Ghost Ship” by Leah Cutter

“The Hair Thief” by Annie Reed

“Follow You” by Dayle A. Dermatis (non-genre, not reviewed)

“Loss of Power” by Paul Eckheart

“We Know Who We Are” by Rob Vagle (non-genre, not reviewed)

“A Murder of Clowns” by Robert Jeschonek

“The Watch” by Kristine Kathryn Rusch (non-genre, not reviewed)

“Cinnamon Chou: The Case of the Glittering Hoard” by Deb Logan

“A Touch of Memory” by C.A. Rowland

The stories in this anthology deal with theft, in a literal or metaphoric way. In addition to tales of science fiction and fantasy, it offers crime fiction, a character study, and even a sports story.

“The Ghost Ship” by editor Leah Cutter takes place aboard a space station where several starships are docked. The protagonist, an electronics expert, accepts an assignment to place a device on an abandoned vessel that will allow its position to be monitored secretly. He discovers a hidden treasure aboard it, leading to a potentially deadly conflict with a distant relative.

The relationships among the characters, members of an extended family engaged in activities of questionable legality, are interesting. The motive behind placing a tracer on the ship turns out to be a subtle one. The way in which the protagonist is manipulated into doing what the family wants him to, without letting him know their true purpose, is clever. Also appealing is the fact that he gets what he wants as well.

In “The Hair Thief” by Annie Reed, an elderly man in an assisted living facility discovers that tiny people are stealing his hair to make clothing for themselves. He makes use of them to exact a just revenge on a cruel attendant.

The portrait of someone losing precious memories after suffering a stroke is powerful and moving. The whimsical premise of the story is less effective, although the attendant’s fate may cause the reader to smile.

“Loss of Power” by Paul Eckheart takes place in a world where people sometimes become gods while still living. The main character underwent such a transformation, only to find himself mortal again, without the magical abilities he enjoyed as a deity. A difficult journey through a desert wasteland to his former home leads to a meeting with two gods, who reveal his destiny.

The story creates an intriguing sense of mystery, as the protagonist struggles to survive the desert and discover the reason for his plight. The explanation is unexpected, but contradicts itself in some ways.

In “A Murder of Clowns” by Robert Jeschonek, a police detective investigates the disappearance of his son, a stand-up comic. The setting is a strange city, where people laugh at tragic events and comedians perform their routines at funerals. The explanation for this bizarre behavior involves a secret project, with implications for the entire world.

At first, the story seems like a Kafkaesque nightmare mixed with hardboiled crime fiction. The reason that the city is full of inappropriately jolly people is difficult to swallow. This offbeat tale might have worked better as pure surrealism, without throwing in a science fiction premise.

“Music Hath Charms” by Nina Kiriki Hoffman features a musician with magical powers. A witch steals his ability to perform and enjoy music, in order to restore the health of her cursed child. The musician faces the dilemma of regaining his skills, without dooming the child to a zombie-like existence.

This modern-day fantasy is full of likable characters; even the witch is sympathetic, acting only out of love for her child. The musician solves his problem, and that of the child, in a way that seems too easy.

“Cinnamon Chou: The Case of the Glittering Hoard” by Deb Logan is one of a series of stories for young readers about a girl on a space station. Eager to become a detective, she assists her father in his investigation into a series of thefts aboard the station.

Even for a story intended for preteens, the solution to the mystery is obvious. This lighthearted tale is best described as cute, with all the positive and negative connotations of that word.

“Lazarus Coughed” by Stefon Mears takes place in a bar frequented by demons and those few humans desperate enough to find the place, in order to sell their souls. The narrator is a half-demon, who witnesses a demon take a man’s soul. He plots to seize it for himself, leading to a confrontation with another, much more dangerous demon.

The author manages to come up with a unique twist on the familiar premise of selling one’s soul. We never find out why the man sold it; instead, the plot hinges on the soul itself, and what the narrator plans to do with it. Much of the story deals with a violent battle between demons, which is less interesting than the way in which the soul is used.

In “A Touch of Memory” by C.A. Rowland, an infant is born without the ability to retain long-term memories. He manages to survive by absorbing the memories of others, providing him with the basic knowledge he needs to live. Growing up in the deep backwoods with his grandmother, he avoids taking memories without the permission of those who provide them. When the elderly woman begins to lose her own memory, he steals memories of his grandmother from others, in order to pass them on to her.

The author depicts the lives of poor rural characters without condescension, in a believable fashion. The story has strong emotional impact, while avoiding excessive sentimentality.

Victoria Silverwolf steals time from work to write these reviews.