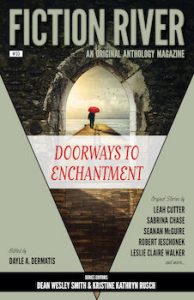 “Common Cause” by David Stier

“The Higher Duty” by Leah Cutter

“The Realm That Didn’t Suck” by Robert Jeschonek

“The Door to Nowhere” by Leigh Saunders

“Into the Fire, the Second Time” by Chuck Heintzelman

“And the Bears Will Sing You Home” by Dayle A. Dermatis

The thirteen stories in the latest volume of this long-running series of original anthologies fall into the category of portal fantasies. That is, they all deal with transitions between the ordinary world and other realities. The tales range from tragic to comic, with a touch of horror and a great deal of adventure.

In “Restoration” by Sabrina Chase, a woman hired to repair antique furniture in a very old house discovers a hidden cellar containing a strange door. Her assistant disappears into it. She confronts the mysterious owner of the house, who reveals his true nature, leading to a battle for survival in another world.

The detailed description of the house and its antiques, based on the author’s own experiences, is vivid and interesting. The fantasy content of the story is less original.

The title character of “Father Otto” by Mary Jo Rabe is an aging priest in a German diocese. He walks through a door connecting his office to a meeting room, and winds up in a strange place that resembles a chapel he attended as a child. When he goes back to the diocese, he discovers that he has gained important skills, but has also paid a heavy price for them.

The setting is an unusual one, and this story, a first sale for the author, is an effective character study. The nature of the other world he visits, and the beings who greet him there, remain unexplained. This aspect of the plot may be too vague for some readers.

“Common Cause” by David Stier takes place in Belgium during the Second World War. An American soldier and a German soldier enter an ancient stronghold, and must work together to rescue a woman from a monster.

The military portions of the story are powerful and realistic. The author aptly conveys the desperation of two ordinary men trying to survive the intense cold of winter, as well as a supernatural menace. The way in which enmity turns into an uneasy alliance, and then friendship, is believable. The fantastic content of the plot may seem overly familiar to readers of sword-and-sorcery adventures.

The protagonist of “The Higher Duty” by Leah Cutter is an anthropomorphized animal from a fantasy world based on Japanese mythology. (He seems to be a version of the Asian mammal known, somewhat inaccurately, as a raccoon dog.) In order to rescue his brother, held prisoner by the wicked queen of anthropomorphized foxes, he must enter the human world in the form of a young woman and act as a spy. He struggles to find a way to save his brother, while preventing human magicians from starting a deadly war with the foxes.

The background, which may be less familiar to many than the traditional European setting for heroic fantasy, is interesting. The human world shown here is not the one we know, but rather one in which magic and other worlds are accepted as normal. Although this adds some originality, it also lessens the ability of the story to engage readers.

The narrator of “The Realm That Didn’t Suck” by Robert Jeschonek travels through countless fantasy worlds, in search of the man she loves. They became separated when they first passed through a portal into another reality, due to the way that time passes differently among various worlds. After surviving many adventures in unpleasant places, she finally reaches a world that resembles Earth, and rejoins her lover in an unexpected way.

The author displays great imagination in the descriptions of the bizarre worlds the narrator visits. Along the way, she acquires a large number of powerful magical abilities, so that she winds up like a superhero. This makes it difficult for the reader to empathize with her.

The main character in “Honed Sharp and Ready” by Brigid Collins is a housecat awaiting euthanasia in an animal shelter. Through sheer will power, she escapes into a world where she must battle a lion, and discover the true nature of so-called witches.

The author manages to write from the point of view of a domestic animal while avoiding whimsy or cuteness. The fantasy concepts are original, and appropriate for a story about felines. One does not have to be an ailurophile to appreciate the protagonist’s courage and resolution.

The punning title of “Elf Help Seminar” by Stefon Mears indicates the story’s lighthearted mood. For unexplained reasons, magical beings find themselves stranded in the mundane world. An elf attends a meeting on how to adjust to this new reality, leading to a joke ending. The author writes well, but the entire thing is just an excuse for a silly punchline.

In “Stone Tower” by Dory Crowe, a young girl and her older half-brother wind up in a timeless place after bullies threaten the boy’s girlfriend. They meet children from the past, all stranded here and seeking a way to return to their homes. The key to escaping this purgatory is to save someone you love from danger.

Best suited for young adults, this is a straightforward tale of facing up to those who threaten you. The other youths trapped in the timeless place, ranging from a pre-Columbian Native American to a Twentieth Century teenager, are more interesting than the main characters.

“The Door to Nowhere” by Leigh Saunders is based on the so-called Winchester Mystery House, a mansion in San Jose, California, which is now a popular tourist attraction, due to its eccentric architecture. Full of oddities like stairs that lead to blank walls, there are many legends connected with the house and the eccentric heiress who directed its construction.

In this story, the elderly Sarah Winchester is able to enter a better version of her past by walking through doors that lead nowhere, becoming a young woman again, and seeing her daughter, who died as an infant, grow up. Other incidents occur, such as the 1906 San Francisco earthquake and the appearance of the ghosts of Confederate soldiers. However, the main plot is very simple, and this nostalgic tale works best as a mood piece.

“You Can’t Take What I Won’t Give” by Leslie Claire Walker is narrated by the incarnation of Famine. Although she has existed since the beginning of time, she takes the form of a preteen girl. After bringing a young girl into a private hell, she is herself dragged into another world. Here she meets an old foe, apparently a human being, although she works for the Serpent from the Garden of Eden. The enemies work together to find out why they were brought here, and Famine learns something about herself.

This confusing synopsis indicates the complex and mysterious mythology underlying the story. The author has written several works that take place in this odd universe. Readers familiar with previous stories and novels in the series will better appreciate this offbeat tale than those who are not.

In “Into the Fire, the Second Time” by Chuck Heintzelman, a man lost his parents in a house fire when he was a child. At that time, he went through a previously unknown door in the basement, where he faced frightening situations, but emerged unharmed by the flames. As a married man, he discovers a similar door in his own house, finds the same disturbing place behind it, and risks losing another loved one to fire.

Like other tales in the book, this surreal horror story seems to be an allegory about facing one’s fears. The things that happen to the protagonist beyond the door are eerie, but if they are intended as symbols their meaning is unclear.

The narrator of “Fun House Mirrors” by Kristine Kathryn Rusch, co-editor of the Fiction River series with husband Dean Wesley Smith, is a politician who loses an important election, although she expected to win easily. While in a state of emotional shock due to this loss, a brief encounter with a strange woman gives her the ability to perceive different futures in mirrors. After time spent in a mental hospital, she steps in and out of these various worlds. Based on her visions of possible futures, she works as a campaign manager, in an attempt to avoid the bad ones and bring the good ones about.

The author makes use of the volume’s theme of portal fantasy in a unique and subtle way. The story’s portrait of election campaigns is unusually realistic, without presenting any particular political viewpoint. The fact that the narrator does not welcome her gift of prophecy, and chooses not to give it to another when she dies, adds poignancy. The ironic way in which the plot is similar to an ancient myth is an effective touch.

“And the Bears Will Sing You Home” by Dayle A. Dermatis, editor of this volume, features a young girl who enters a fairy tale world, full of talking animals, royalty, and monsters. The inhabitants accept her as a prophesized hero, destined to defeat evil. She spends years training as a warrior, and fulfills her quest. After experiencing a personal tragedy, she returns to the ordinary world, where no time has passed. Once again she is a child, but with the memories of an adult.

There are many references to other works of portal fantasy, and at times the plot seems like simple wish fulfillment. The two aspects of the story that add a more serious touch are the main character’s loss of a loved one, and the fact that the people in the magical world are dark-skinned, like the protagonist. While these are important points, they are not sufficient to make the story stand above other works of fantastic adventure.