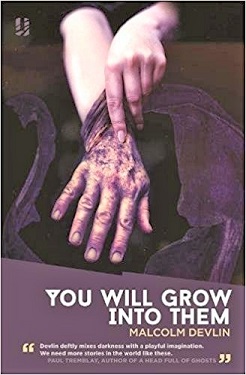 You Will Grow Into Them

Previously unpublished stories:
“We All Need Somewhere To Hide”
“Songs Like They Used To Play”
“The Last Meal He Ate Before She Killed Him”
“The Bridge”
Reprints:
“Passion Play”
“Two Brothers”
“Breadcrumbs”
“Her First Harvest”
“Dogsbody”
“The End of Hope Street”

This collection contains ten fantasy/horror stories by Malcolm Devlin which have, as the title might suggest, a loose theme of transformation.

The first of the new stories is “We All Need Somewhere To Hide.” In this tale we meet Alce, who we learn is some kind of exorcist in a world where demons are very much a real phenomenon. She finds herself dealing with something called a Sculptor, and its impact turns out to be closer to home than she ever expected. Although this piece isn’t quite as creepy and disturbing as “Two Brothers,” it’s still one that left me with much to wonder about. The ending manages to be satisfying, but also open to interpretation. Cleverly done.

Next up is “Songs Like They Used To Play.” This begins with the line “In 1921, when he was nine years old, Tom Kavanagh walked…” yet at the end of the paragraph we learn he was living in 1994 at the time, setting up some interesting conflict. Who is Tom, and how is he skipping between decades? Without giving too much away, I will say that this is not science fiction–no true time-travel is involved–but is rather another horror/fantasy piece. Reading it, I rather had the sense of a clever idea that didn’t quite form a full story on its own. The problem that Tom has to deal with felt almost forced into the story so as to give it more (some) conflict, and the ending felt too easy. It is well-written, but it wasn’t my favorite in this collection.

“The Last Meal He Ate Before She Killed Him” begins with a group of people sitting down for a meal. A rather peculiar meal, which turns out to be a reenactment of an infamous murder which has occurred some years previously. The protagonist is Dominik, an ambitious young man from the country who is hoping for promotion, and who cares a great deal about how others see him. The fantastical elements here are slight, and really only arise from the fact that this story is set in some sort of alternative history. (Or perhaps future, in which case, who knows?) There’s not much horror, either, but there are some lovely pieces of description in this piece, and Devlin rather cleverly made me both like and dislike Dominik by turns. By the end I wasn’t quite sure if I wanted our “hero” to survive his strange dinner date or not! Recommended.

The last of the new stories is “The Bridge.” Here we meet a couple who’ve just moved into a house in a new town. They find a model of the entire town in miniature in their attic, and struggle to decide what to do with it. This is a story which could have gone down any number of quite obvious and predictable roads, but doesn’t. That said, I’m not entirely sure it quite goes anywhere, by the end. I went back and re-read it a few times, wondering if I had missed some critical clue–but it escaped me if I did. As with all the pieces in this collection it is beautifully written, but it felt more like a description of a few days of the couple’s lives than a story in itself.