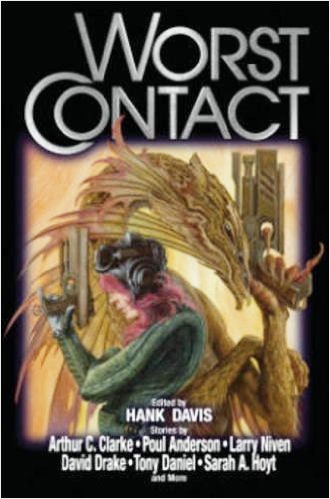 “Puppet Show” by Fredric Brown
“Contact!” by David Drake
“The Flat-Eyed Monster” by William Tenn
“The Power” by Murray Leinster
“Early Model” by Robert Sheckley
“Her Sister’s Keeper” by Sarah A. Hoyt
“Plaything” by Larry Niven
“Random Sample” by T. P. Caravan
“No Love in all of Dwingeloo” by Tony Daniel
“First Contact, Sort Of” by Karen Haber & Carol Carr
“Fortitude” by David Brin
“They’re Made Out of Meat” by Terry Bisson
“Alien Stones” by Gene Wolfe
“Pictures Don’t Lie” by Katherine MacLean
“Backwardness” by Poul Anderson
“Dodger Fan” by Will Stanton
“No Shoulder to Cry On” by Hank Davis
“Hornet’s Nest” by Lloyd Biggle, Jr.
“Protected Species” by H. B. Fyfe
“The Cage” by A. Bertram Chandler
“Shadow World” by Clifford D. Simak

Despite the name, Worst Contact is much more oriented towards the humorous than the dreary, with a general focus on stories with an amusing or ironic twist. Including an impressive list of authors and stories written from as early as 1945, and as recently as this year, this collection contains stories by such luminaries as David Drake, Larry Niven, David Brin, Gene Wolfe, Poul Anderson, William Tenn, Clifford D. Simak and more. The only original story, reviewed later, comes from Sarah A. Hoyt. The collection is weighted towards stories from the 50s and this means that some feel a bit dated or have lost the impact that they once had. That said, there are a number of fantastic stories included in the book. I should highlight the classic “They’re Made Out of Meat” by Terry Bisson and Poul Anderson’s “Backwardness” as particularly good inclusions.

The only true “Worst Contact” stories are “Hornet’s Nest” by Lloyd Biggle, Jr. and “Protected Species” by H. B. Fyfe, both of which are well worth the time. The remainder are either humorous, Fredric Brown’s “Puppet Show,” William Tenn’s “The Flat-Eyed Monster,” Robert Sheckley’s “Early Model,” Larry Niven’s “Plaything” etc. or overall neutral e.g. David Drake’s “Contact!” and Gene Wolfe’s “Alien Stones.”

Sarah A Hoyt’s story “Her Sister’s Keeper” is a bit of an anomaly in the collection. Besides being the only original story, it is the newest by two decades. As a result, the style and meta-narrative have a different flavor from the rest. In it, the protagonist Lillian, a xeno-linguist, invades a space ship that landed in downtown Denver in search of her younger sister. As usual, Hoyt has a good feel for narrative pacing and the reveal is both adequately telegraphed and logical. The story itself resonates with elements of the classic “To Serve Man” but concludes with the human wave elements characteristic of her writing.

As a whole, the book is a bit of a mixed bag. There are some truly fantastic stories, and some that are so forgettable that after reading them yesterday, I have to go back and review them to even recall the plotline, “The Power” being the most egregious example. In the end, Worst Contact brings together a number of deserving stories that should be given new life, and the lesser inclusions are forgivable. While not an indispensable part of a good SF collection, this is recommended for lovers of first contact stories and for those who love the golden age of SF.