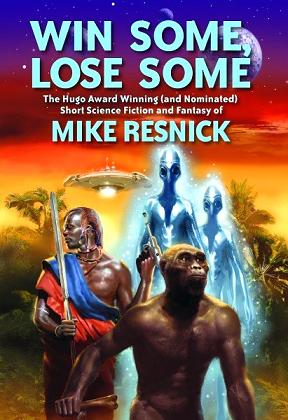 Win Some, Lose Some: The Hugo Award Winning

There is only one Mike Resnick.

I’m still not sure if that’s a good thing or a bad thing.

The man can write and write really, really well. Not only is he prolific, he’s one of the most versatile writers I’ve ever come across. He can steal the show in science fiction, fascinate fans in fantasy, generate gossip in cross-genre works, and do all that in either novel or short-story length works.

As versatile as he is, there is an ineffable sense of Resnick-ness about all his writing. Something that tells you that you’re reading something Mike Resnick wrote, no matter the genre, if it’s horror or humor, if it’s in space or the old west. You know when you’re reading Resnick because that sense of quality and craftsmanship comes through so very clearly.

And that’s good. I like to read Resnick and he likes to write. That’s good, too.

Still, only one Resnick? Is it good? Yeah, that’s pretty good. The bad part about having more than one Resnick? I might never get anything else done except read his works.

In fact, over the span of time between 1989 and 2012, Resnick was nominated 36 times by the members of the World Science Fiction Society to receive the Hugo award, the highest award given by the fans to writers. Thirty of those nominations were for his short fiction.

Yes, you read that right. Over 23 years, Resnick was nominated for the Hugo award 30 times for his short fiction work. That’s more than once a year. Getting a little into the math, I’m estimating that he gets an award nomination every eight months. For 23 years in a row.

He is just that good. If not better.

So last year, Resnick and ISFiC Press got the bright idea to package all the Hugo-award-nominated (and winning) short stories all together in one volume. Which leads us to this book – Win Some, Lose Some: The Hugo Award Winning (and Nominated) Short Science Fiction and Fantasy of Mike Resnick.

Cracking open the pages of this tome, you’ll find some of the most refreshingly fun, incredibly soulful short fiction you’ve ever read. And, as good a collection as this is, it still is missing some of my absolute favorite Resnick short fiction, not collected simply because there probably was no more room for him on the Hugo ballot that year.

Over the course of this massive collection, the reader will visit Africa many times, including spending time on a Utopian asteroid named Kirinyaga that is populated by the last true member of the Kikuyu tribe. The Kirinyaga sequence of stories is, perhaps, one of the most touching, most well-realized series of stories I’ve ever come across.

With an influx of cheap energy, Earth has begun offering living space in terraformed asteroids to any group of people with a common cultural heritage and a desire to live their lives away from the scrutiny of Earth. The Kikuyu tribe from East Africa took the white’s offer and formed their own Utopia, Kirinyaga.

It is a land of hot sun, seemingly endless grasslands that are filled with wild animals, and a people who have willingly wound back their culture to pre-technological times. To them, it is Utopia. There is one man, though, who has access to modern technology so that he can be the interface between the Kikuyu and the whites. There is one man in all Kirinyaga who believes more strongly than anyone else that nothing should change – ever – for if a Utopia is to change it will be, of necessity, for the worse.

These two men are one: The Kikuyu spiritual leader, or mundumugu, named Koriba. No one believes more fiercely in the supremacy of the Kikuyu way of life. Watching as this believer faces down challenge after challenge, both from within and without, is like being witness to the plight of Moses after the long exile. Those he shepherded to the Promised Land are allowed to enter, but he is not.

The last Kirinyaga story included in the collection will break your heart. Resnick is just that good.

Readers also get to watch as a fictional Teddy Roosevelt tries to bring the benefits of modern police technique to London to help catch some killer with the nom desangre of Jack the Ripper.

I could go on and on about the high level of craft on display in these stories, how these are the work of an artist at the peak of his creative powers, subtly wielding the writer’s tools in a way that draws in a reader, enfolds the reader in the narrative’s world and then takes complete control. I could.

However, you should already know all that. After all, these 30 stories were nominated for the field’s highest honor. Five of them won that honor. Think on that. One out of every six of these stories was named the best of the year. And these aren’t even all the stories he wrote over this span.

You should go out and buy this book. Get a hardback copy. Download the ebook format. Do whatever it takes.

If you want to see what a good short story looks like – not just a good science fiction or fantasy story, but a good story period – then this is the book that will show it to you.

This is what you need. And you didn’t even know you needed it. Go get it.