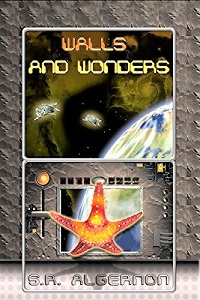 This single-author collection assembles thirteen previously published stories, as well as the eight original stories listed above. There is also an original poem, written in response to a work by Rudyard Kipling. The book concludes with another original creation, which is difficult to classify. It appears to be a chart explaining the author’s vision of humanity’s future, although I found it completely incomprehensible. Notable among the reprints is the Hugo-nominated story “Asymmetrical Warfare,” narrated by an alien who finds it difficult to understand why human beings don’t regenerate after they are killed in battle. The other previously published stories range from a tale of a galactic empire in the far future (“Sort-of Damocles”) to a depiction of bizarre alien biology (“Once More, Onto the Beach”) to a light-hearted account of a deal with a demon (“In a New Light”) to a modern battle with a vampire (“Unperished”) to a high-tech prequel to “A Christmas Carol” (“Chains of Plenty.”) The new stories display an equally wide range. The author divides his collection into four sections of thematically related stories, each relating to the metaphor of a wall. In “Calling Out,” communication takes place across the wall. In “Breaking Through,” characters travel across the wall. In “Tearing Down,” they destroy the wall. In “To Build Anew,” new walls arise. This division offers insight into the author’s philosophy, but are not necessary to enjoy the stories as entertainment.

“Witness” takes place in a future of constant surveillance. An astronaut’s strange encounter with an alien leads to a worldwide dictatorship that monitors all conversations for signs of disloyalty. An illegal device allows the protagonists to experience the alien’s real message, which is different from the official one, through images in their brains. This is an interesting story with multiple themes, not all of which come together smoothly.

In “The Meme Hunter,” technology allows travel among parallel universes. A man seeks a reality where his dead daughter is still alive. The way in which he finds it reveals his shortcomings as a father. This story has a powerful emotional impact.

“Election Day” makes use of a similar plot for satiric purposes. Elections cause each person to travel into a universe where the preferred candidate wins. When the protagonist votes for an extremely unlikely candidate, the result is unexpected and unpleasant. This story is a variation on the old theme of being careful with your wishes.

“Symbiosis” takes place on a world where sentient creatures with fur and claws do battle with intelligent, mobile plants. Together they form an unlikely alliance against humanoid invaders. This story is full of exotic details, but is not always clear.

In “Sculptors,” a seismologist investigates inexplicable earthquakes on a planet with ancient ruins of an alien civilization. The truth turns out to be much worse than expected. This is a decent science fiction adventure story, if a bit melodramatic.

“Achievement” is told in backwards order of time, from a distant world in the far future to Earth only a few years from now. The reader learns how a very old man became one of the passengers aboard a starship. This is an inspiring story, made more effective by its unusual structure.

“Severance” involves starship navigators with two heads. The protagonist, a former starship captain relegated to a space station after a disaster destroyed her vessel, investigates the death of one of the navigator’s heads. The concept is interesting, but implausible.

In “Thicker than Water,” a political revolution reveals the secrets of a mysterious biological research facility. The main character is a revolutionary who discovers what happened to his brother, whom he believed to be stillborn. The truth turns out to be surprisingly optimistic. This story makes extraordinary concepts seem believable.

Although not all readers will enjoy every story in this collection, there is something to appeal to almost anyone interested in science fiction.

Victoria Silverwolf has the song “Wonderwall” going through her head.