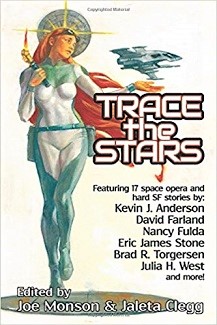 Life, the Universe, & Everything: The Marion K. “Doc” Smith Symposium on Science Fiction and Fantasy (LTUE) is an annual three-day academic conference on all facets of imaginative fiction. Although it offers many of the same activities as science fiction conventions, such as gaming and an art show, the emphasis is on serious scholarship. Aspiring authors have the opportunity to meet with seasoned professionals in small groups, and to offer their works to representatives of publishing houses.

The roots of LTUE reach back to 1982. Under the auspices of English professor Smith, students at Brigham Young University, located in Provo, Utah, met informally with visiting writer/editor Ben Bova. Over the years, the number of attendees grew from a few dozen to well over one thousand.

Trace the Stars is the first in a series of LTUE benefit anthologies. All the authors donated their stories to support the conference. Proceeds allow students to attend LTUE at reduced prices. The book is dedicated to the memory of Smith, who passed away in 2002.

The majority of the stories are reprints, dating from 1978 to 2016. Although all involve space travel, there is a wide range of theme and mood. Some are from well-known publications such as Analog, and others from relatively obscure sources. The setting might be a distant planet inhabited by strange aliens (“Angles of Incidence” by Nancy Fulda) or in orbit around Earth (“Freefall” by Eric James Stone). Character studies (“The Road Not Taken” by Sandra Tayler) alternate with space adventures (“The Ghost Conductor of the Interstellar Express” by Brad R. Torgersen) and tales of violent conflict (“Neo Nihon” by Paul Genesse). Most fall clearly under the categories of hard science fiction and space opera, but a few (“Sweetly the Dragon Dreams” by David Farland) feature settings, technology, and aliens so exotic that they have the feeling of fantasy.

Four stories are original to the volume.

“Working on Cloud Nine” by John M. Olsen takes place aboard one of several space stations in low Earth orbit. Loss of communication with the outside universe is only the first in a series of crises that threaten the survival of the crew. They must fight for their lives, and for the future of space exploration.

The author creates a great deal of tension as one challenge after another faces the protagonists. Technical details of life aboard the space station make the setting seem very real. The antagonist is a two-dimensional villain, with an unconvincing motive.

“Knowing Me” by Eric G. Swedin is narrated by a man of great intelligence who has severe psychological problems. Even as an adult, he is emotionally dependent on his mother, and has no other relationships with people. This changes when he meets the woman he will marry. The story begins when the narrator and his wife travel to a comet. They are part of a mission to direct the comet to Earth, in order to reverse a new Ice Age. Flashbacks reveal the narrator’s background, and offer clues to his unexpected decision when disaster strikes.

The author makes subtle use of a narrator with little understanding of other people. Despite its apocalyptic premise, this is primarily an introspective story, with a great deal of insight into its protagonist.

“Making Legends” by co-editor Jaleta Clegg is set aboard a spaceship near Neptune. A meteor strike forces the crew to abandon the vessel. Left on board when there is no more room on the lifeboats are the captain, his first officer, and a low-ranking technician. All three have unrealized ambitions. Facing what seems to be certain doom, they work together to escape crashing into Neptune and to achieve their dreams.

Despite the melodramatic plot, the story often has a comic tone. At times, it seems like a parody of space fiction. The characters are supposed to be experienced professionals, but act more like adolescents. What the technician is able to accomplish leads to a dramatic ending, but one that is very hard to believe.

In “Cycle 335” by Beth Buck, an interstellar vessel journeys to a colony world out of communication with the galactic empire during a period of interregnum. The commander orders an attack on the first spaceship they encounter near the planet. The protagonist desperately tries to prevent the battle. A final revelation leads to a darkly ironic conclusion.

The plot manipulates the reader’s expectations in a clever way. At first, the story seems to be a typical example of military science fiction. Not until the end does it become clear what the author really has in mind.

Victoria Silverwolf has never been to Utah.