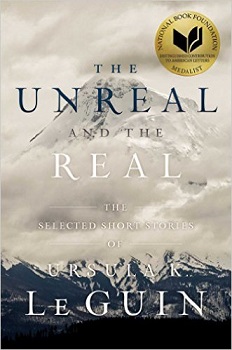 The Unreal and the Real:

This mammoth collection of short stories from Ursula K. Le Guin contains 39 reprints, loosely organized into two sections: “Where on Earth” and “Outer Space, Inner Lands.” Each section has an original introduction worth reading in itself for the insight it offers about the author as she speaks a little more plainly than as she does through the myriad of subtle, deep, and always beautiful fictional pieces she offers in this collection.

Her introduction to “Where on Earth” explains how she chose and arranged the stories, and she expands on these before “Outer Space, Inner Lands” with an obligatory definition of SF, fantasy, and genre, and loosely categorizing her stories. Then she casts categories to the winds with a declaration that genre has generally been “degraded into a disguise for mere value-judgment.” The classifications don’t adequately describe what she writes, or what anyone writes, really. If anyone can write across the spectrum of speculative fiction, merging tropes, categories, classifications, genre and using them as devices for story, rather than as containers for it, it’s Le Guin.

That said, I’m going to talk about themes that I noticed in the collection.

One of the first themes I observed is that the stories are full of ethical and emotional dilemmas. In “The Diary of the Rose,” a psychoscopist—who uses a device to see images of patients’ thoughts—learns that one of her patients, supposedly psychotic, has nothing wrong with him except that his beliefs aren’t what society wants him to believe. She can’t save him; she is as trapped as he. What is integrity in such a situation? “The Ones Who Walk Away From Omelas” asks the same question though in a seemingly perfect society whose perfection is conditioned upon the suffering of one feeble-minded child. These stories both highlight internal conflicts about sacrifice, the definition of the greater good, things that can break us when integrity seems incompatible with peace.

A somewhat easier choice for integrity occurs in “Betrayals,” one of my favorites of the collection. An old woman, far too aware of her personal failures, takes care of a disgraced man when he falls ill, despite her own judgments and mistrust of him. Without intending to, she finds a sanctuary in his home and learns that the idealistic inner self in her still lives. “The Jar of Water,” in which a loyal servant goes on a seemingly pointless journey to bring a jar of water across the desert to a holy man, also shows someone being true to himself to overcome difficulties and judgments.

Another theme in this collection is the granting of dignity and humanity to animal characters, which sometimes highlights the lack thereof in their human counterparts. Animals are anthropomorphized in Le Guin’s humorous extracts from a therolinguistics (study of animal language) journal in “The Author of the Acacia Seeds,” in “May’s Lion,” where the lion retains its animal nature but whose plight highlights both human and animal need for dignity, and in “Buffalo Gals, Won’t You Come Out Tonight” in which a human girl bridges a reality of animals who act like people acting like animals. “Direction of the Road” goes one or two or more steps further, telling a story from the point of view of a large tree who asserts that cars driving by are standing still, and it is the one moving back and forth and growing and shrinking.

We also see animals used as devices to highlight negative characteristics of humans. “Mazes” speaks from the point of view of a human who is being studied by a large alien, in the same way that humans study rats. Like with us and the rats, there is no bridging the communication gap.

In these animal stories and beyond, Le Guin’s stories highlight different ways of seeing. There’s a Pied Piper in modern times, piping to the children inside us in “The Lost Children.” “The Wife’s Story” is a werewolf story in reverse. “The White Donkey” describes a unicorn within a cultural perspective that has no concept of a unicorn. “Semley’s Necklace” mixes modern alien species with fantastic warrior peoples and dwarves, showing what can happen when you combine the time-lapse from interspace travel to legendary fantasy stories.

Can we ever see more than a partial truth—does reality become more surreal the more perspectives we see? Le Guin’s stories of ordinary people in this collection, told in seemingly random jumps from one point of view to another, indicate that this might be so. “Ether, Or” rotates points of view to reveal infinite possibility. “Half Past Four” is a clever, somewhat frustrating piece composed of eight different unrelated stories about three characters with the same names, but who are different from the people of their names in the other seven stories.

Another permutation of this theme occurs through several stories of mental illness, from the dreamlike “The Water Is Wide” to “Texts,” in which a woman sees written messages in everything—from lace to sea foam. Is she insane, or is she seeing a truth?

The stories that deal more directly with philosophical questions are, in my opinion, where Le Guin particularly shines. Another of my favorites here is “Nine Lives,” in which a team of ten nearly-identical clones are a unit unto themselves, self-sufficient, needing no one outside themselves. What happens when one or more of such a set dies?

I also loved “The Shobies’ Story,” which, in dealing with the interface between consciousness and manifested reality, suggests that time travel across great distances is a matter of syncing to the right reality as a group.

Two more excellent stories dealt with social questions by postulating the existence of societies with rigid castes or gender roles. Why in almost all societies do men dominate women, these stories ask? In “The Matter of Seggri,” men, born in far fewer numbers than the women, live in castles and spend their time in sports, fighting, competitions, and having sex. The women do all the labor, go to colleges, and pay men for sex and breeding. First, this seems like a misogynistic society favoring men, but then you see the cooperation of the sexes; you see that the women have all the power, and that perhaps it’s a system that works in its way, functional according to how their needs have played out.

In “The Wild Girls,” three castes must each marry from one of the other groups in a rigid triangle that keeps them supporting and dependent on each other. Crown men, who need to marry Dirt women, go on a raid of nomad villages to get Dirt girls as slaves. Of the kidnapped children, one baby dies, but in the Dirt lore they know that a named child who is unburied remains a ghost. Two of the girls are followed by this ghost-baby as they enter their new lives as Dirt slaves in a Crown household. The elder tries to protect her little sister, but the lack of understanding from one caste to the other causes their downfall.

Le Guin includes several of her funnier stories in this collection, although her humor is subtle and understated, and on the dark side. “The Fliers of Gy” describes a race of feathered people, of whom those who can fly are often ostracized. “The Silence of the Asonu” is about a people who speak so little that a religion has been created by outsiders who worship their rare utterances. “The Ascent of the North Face” is another odd piece in which climbers, describing a great ascent, turn out to be going up a building.

Upon finishing the book I found I needed no convincing to love this collection of stories. Even the few Orsinian stories in the beginning of the first section whose speculative element is too subtle for my taste, evoke emotions that linger and characters who are hard to forget. Then the collection quickly picks up steam in its ability to enthrall, and I was hooked in a way I rarely experience with writing that seems to go out of its way not to feed my subconscious Mary Sue needs. There is so much that is brilliant about Le Guin’s writing—what I admired most was that her observations about human character and society are portrayed less as commentary and more as questions, to encourage shifts in how we look at the world.

Overall, a long collection of wonderful stories that are well worth the time—they are the sort that enrich and fulfill.