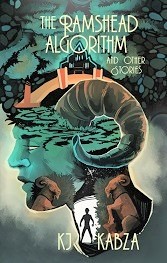 The Ramshead Algorithm and Other Stories

Eleven stories with eleven compelling characters driven by passion and love, engage the reader with social and ethical conflicts inside extraordinary worlds. Each story in this collection raises more than one philosophical question and concludes by letting us think even deeper about them.

The anthology begins with “The Leafsmith in Love.” A story full of pride, prejudice and clockwork fantasy. Magic is real and gives life to clockwork creatures. A Leafsmith is someone who creates clockwork creatures by taking a living being and replacing its organs with brass gear wheels. Jesper, the Master Leafsmith of Holdt Castle, is focused on his craft and less on his social life, but soon he falls for Lady Zuhanna. Princess Kanna, however, demands to be the center of attention, and acts out of jealousy with the fact Jesper hasn’t picked her. Thus, the princess creates a series of problems. Jesper’s struggle to achieve a lifelong relationship with his beloved Lady Zuhanna is surrounded by a magical background of brass, royal silk, and intrigue. The Leafsmith craft looks fascinating, as well as Jesper’s story.

In the following story “The Color of Sand,” we find a coastal setting colored by magic translucent stones carrying unknown benefits, or drawbacks if someone ingests them. Catch and his mother, Fairday, live in a hut away from their village, with their only neighbor the talking sandcat Bone. Catch’s curiosity will bring him, his mother, and Bone into an adventure across the ocean, where magic is stronger from what they thought they knew. The love of a mother and her unbreakable will to protect her child helps the story move forward. A relationship so strong it motivates its characters to act like heroes.

Next comes the science fiction story “The Ramshead Algorithm,” which shares its title with the anthology. Ramshead is known by his social circle as a party boy, son of a multi-billionaire with no worries for his future and no will to struggle for it. No one knows, however, that Ramshead is already working on a personal project in a parallel dimension. Everything began ten years ago when he discovered in his father’s mansion’s hedge maze a portal that can lead to other worlds. When his father decides to destroy the hedge maze, he runs to save worlds from colliding and prevent a catastrophe.

From the beginning to the end we get carried away by a conflict between altruism and materialism. Through Ramshead’s struggle to save the portal, he reevaluates the relationship with his dysfunctional family and discovers truths that he wishes he had known earlier. Ramshead’s eagerness to save the entrance so he might escape is only a prologue to his family’s dysfunctionality. Through the eyes of someone who seeks an escape from his world, we witness the corruption materialism has brought to his loved ones. Each character is described by their attachment to his, or her, clothes, shoes, or other possessions. Other than Ramshead, everyone else is motivated by money and power.

In “Night and Day” we meet two characters sharing one body. Lokifur, a white cat-like creature with bat wings for ears, wakes up every night on a floating block of granite amidst clouds. There he meets other magic animals like himself, to whom he tries to speak. Some answer back, while others do not. During the day, Jonathan thinks he never dreams, but, he doesn’t recall any of his dreams and his second identity as Lokifur. He wakes up every morning to go to work at a financial company, and he’d instead talk about work to anyone rather than anything else. Soon, Jonathan can’t stop sleeping, and Lokifur becomes the person who dreams Jonathan.

A continuous switch of scenes from night to day reveals Jonathan’s double identity. The multiple settings and the catlike creatures keep the reader away from realizing Jonathan’s dilemma initially. By the end, I was in a dilemma as well: What is best for Jonathan, the materialistic world, or the dreamworld?

In the exciting set of the short story “The Flight Stone,” we meet Calife and the ‘Air Knights.’ A child can be an Air Knight only if they used to be a starving orphan, for an ‘airhorse’ cannot take off with something more than a lightweight rider. Calife wants to remain an Air Knight, and she will do everything she can to achieve it. The young heroine’s story reflects all that we are willing to sacrifice today, both physically and psychologically, so that we do not return to unsustainable situations of our past.

In the next story, “Steady on Her Feet,” Dr. Svartlebarrt is the best in the field of surgical augmentation. His patients can become energized, moral, committed to their goals, and possess any other character traits with a procedure easy as removing an appendix. Holiday, a girl with no chance to afford such a procedure, who wants the best for her sister and herself, enters Dr. Svartlebarrt’s shop for a free check-up. The doctor will be fond of Holiday and he will offer her a job in his shop. The poor girl without second thoughts accepts the offer. However, the kind doctor and his associates are not as generous as they seem.

A brilliant demonstration of the human need for improvement, Dr. Svartlebarrt offers something more than the addition of a new characteristic or the removal of a bad one. He offers a reset of everything that shaped a character. The social and intellectual discrimination inside and outside the shop sets an emotional plot with clever foreshadowing and twists.

In “The Soul in the Bell Jar” another young girl, Lindsome, visits her great-uncle while her parents are taking a trip around the world. All she can say about her great uncle’s profession is that a Stichman can keep a creature alive by stitching its soul, or the soul of another creature, on its body. Despite the warnings, Lindsome’s curiosity makes her explore her great uncle’s mansion, and she discovers that the scientist has a vision for his craft that endangers everyone.

If I had to pick the thing I liked the most about this story, it would be the sole idea of the Stichman craft and the way it is perceived by Lindsome. Before her curious, childlike eyes, life transforms from interesting to ferocious and gruesome.

In “Heaventide,” Daybreak-under-Clouds prefers she were a man, so she could travel and fish, instead of serving any man for the rest of her life. Her grandmother and the village elders, though, do not approve of her wish. Soon, Daybreak’s courage and eagerness to prove everyone wrong about the wrongness of her gender-based written fate push her into taking an adventurous but dangerous trip.

Despite the tribal setting, the primary conflict presented in this story is not something new for any society. Even in the most advanced civilizations, we see societies structured on gender. Just like Daybreak, many other young women, and men, wish they could choose their place in society, and they fight for this right daily.

In the science fiction story “We Don’t Talk About Death” space pilots are people with calibrated synesthetic schizophrenia, which grants them the ability to navigate through Ureality and make long distance travels. Laurel is a certified Passenger for her pilot Allie, and together they are on a mission from Friedman Station, 6,000 light years from Earth, to Barahna Station 6. To accomplish their mission, they need to pass through a war zone without having any military training. This situation, however, is not their biggest obstacle.

Ureality brings back some of Allie’s memories that should have stayed hidden. Once again, the technology is described nicely through the protagonist’s non-technical point of view. Laurel’s love interest for Allie gives a brighter color than the dark one of Ureality.

In the short story “All Souls Proceed,” white bicycles with empty seats run through a town. The protagonist is a newcomer, who soon takes part to the “All Souls Procession” festival, where people paint their faces like skulls, and, at sunset, they march honoring all their loved ones who have passed away. Even though the story is very short, the setting is so beautifully described, we feel like we are taking part in the festival as well.

Finishing with “You Can Take it With You,” I realized that Kabza kept the most interesting story for the end. Afterlife is an artificial way to spend your last days inside a virtual paradise. Lehann, the protagonist, in real life has a terminal disease and chooses to volunteer as a beta tester in Afterlife for ninety days. Soon she becomes so lonely that she will start exploring her virtual haven until she finds more people with the same feelings as she. When she discovers evidence that indicates she could stay in Afterlife for more than the ninety days, it becomes her personal quest. The idea, design, and background of the Afterlife are brilliant and attention-grabbing. Lehann’s feelings for the lover she left back in the real world, as well as her interaction with other residents of Afterlife, demonstrate the different perspectives of an artificial paradise. After all, if paradise was something you could pay for, how much would it change the way you perceive life itself?