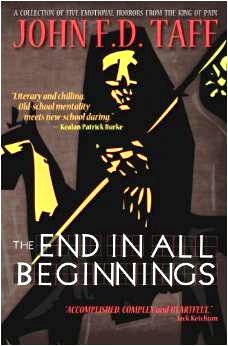 The End in All Beginnings by John F. D. Taff

All five stories in this single author collection are original and of novella length.

“What Becomes God” is a story about friendship, and noble intentions gone very, very wrong. The protagonist, Brian, is the product of a broken home, and counts another boy named Charlie as his only friend. Charlie, however, has leukemia, and drives Brian to ever more desperate measures to try to ensure his friend’s survival. His mother, a lapsed Baptist, tells him that sometimes God demands a sacrifice, which he interprets in a way that has terrible consequences.

The horrific element doesn’t enter until two-thirds of the way through the story, but it’s all the more effective. Brian and Charlie are fully fleshed-out characters by the time the story truly descends into horror, which makes what happens heartbreaking as well as frightening. Brian narrates the story as an adult, but it’s clear he’s never really recovered from the results of what he did. The story is just as sad as it is terrifying.

“Object Permanence” is a chilling tale of the powers of memory and forgetfulness. It opens with the narrator, a man named Chris, trapped in a mental institution, with no idea how he got there. The doctors put him through a regimen of drugs and electroshock therapy, designed to keep him docile–and to make him forget.

He escapes when the hold of the drugs slips, and begins to remember who put him in the institution, though he does not at first recall why. The rest of the story follows his path of remembrance, and makes him realize that in his case, the power of memory is rather more literal than it is for most people. He must remember how to use it, before it is used against him.

Though much of it is set in a small town, somehow the narrative is very claustrophobic, which in this case is a good thing. It fits the tone and the topic very well.

“Love in the Time of Zombies” is, as the title would suggest, a dark love story. A zombie apocalypse leaves only two men alive in a small town and vying for the affection of one woman, with a twist. Unfortunately, despite the prose being wonderful in places, there isn’t a great deal of originality to it. The premise has been used many times before, and there is nothing particularly unique in its usage now.

“The Long, Long Breakdown” is a post-apocalyptic yarn of a world mostly drowned by the melting of the polar ice caps. It’s told by a widower who has spent the thirteen years since the flood raising his only daughter in one of the few places left above the water, haunted by his failure to save his wife. He knows that he’s over-protective of her, and that by keeping her so sheltered he’s handicapping her, but bringing himself to do otherwise is almost more than he can bear. He’s terrified of other people, even while knowing that eventually they will have to seek out others–he will not, he knows, live forever, and that sooner or later he must trust both her and any other people they might meet.

While stories of great floods are not unusual, this one is quite well-done. The narrator has all the realistic fears of a parent, transplanted effectively into an after-the-end scenario, and the daughter, while a stubborn teenage girl, is far from bratty. In many ways, she has a more realistic view of the world they now inhabit than her father, who in many ways still clings to the past. The narrative strikes a nice balance between both: the need to remember and acknowledge the past, but also to accept that the world will never be what it once was, and that an entirely new future must be built.

“Visitation” follows a man named Fenlan Daulk, a widower still grieving the sudden and recent loss of his wife. He is told he’s won the Galactic Lottery, and has been awarded a fortnight stay on a planet called Visitation–a world where the dead can speak to the living. A small number each year are afforded that benefit, and their interactions with the dead are monitored by scientists studying the planet.

Fen discovers that the truth is far more complex than the scientists realize, and is tasked with keeping a secret that could rock the known universe to its core if discovered. Despite the enormity of the burden laid on him, he leaves the planet with the closure he sought, and a new thirst for life. Keeping this secret, being one of the few privileged enough to know it, gives him as much inspiration as his parting words with his wife.

An absolutely fantastic story, “Visitation” combines a few well-worn SF tropes with fresh ones, creating a tale that’s both eerie and bittersweet.