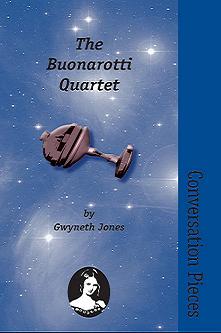 The Buonarotti Quartet, by Gwyneth Jones

Aqueduct Press has published a series of glossy-covered chapbooks of and about “feminist sf”; this tome is one of them. What makes a work of SF explicitly feminist? Well, aside from some extremely overt works like Joanna Russ’s The Female Man, Suzy McKee Charnas’s Walk To The End Of The World and James Tiptree’s (Alice Sheldon’s) “The Women Men Don’t See,” it’s not necessarily obvious. (Of course, you could throw in works like Margaret Atwood’s The Handmaid’s Tale, but IMHO, the latter suffers from comparison with the former works; I prefer my SF undiluted, thank you very much. And by people who are familiar with the tropes and conventions, not just borrowing them.)

Am I qualified to even judge what’s feminist? After all, I’m (to quote a certain editor in another context) an “older white guy.” Which, if you’re PC, means I can’t even see the problem, let alone comment on it. Maybe so, maybe no. I’m of the opinion that I’m old enough to have formed most of my beliefs and opinions consciously, rather than just accepting the waters I swim in, to have examined the relationships between myself and the members of the opposite gender; and if I’m an MCP (Male Chauvinist Pig), as we used to say, at least I have thought about it.

In SF and fantasy, women have often felt that the publishing power structure (or maybe even the public buying trends) were against them, enough to have adopted masculine pseudonyms. Everyone knows about Catherine L. Moore publishing as “C.L. Moore” and Alice Mary Norton becoming Andre Norton; when James Tiptree Jr. “came out” as Alice Sheldon it caused a great stir, even though by that time most women SF writers appeared to feel secure enough to write under their own names. (The first SF writer of either gender was Mary W. Shelley, and she wrote under her own name, by the way.)

Look here: SF has always had, one way or another, its female writers. I submit that even though they may not be publishing overt feminism, just having a presence in a traditionally male-dominated genre is feminist, in and of itself. Whether you accept that the difference in writing is a product of being raised in this society, or whether you feel there’s an innate difference, genetically, in how men and women perceive and delineate the world, there’s usually a difference you can feel to some degree. SF, like Mars, needs women. Especially in this time when fantasy has overtaken the field by leaps and bounds to make actual SF the “poor cousin” in terms of volume. And who knows? Maybe feminism can just mean doing what men do in a traditionally male-dominated field and doing it well. So without examining what feminism is any further, let me say that The Buonarotti Quartet, overtly feminist or not, is welcome in my SF world. If I see any overt feminism in the stories, I’ll be sure to mention it.

So what about these stories? They are apparently an offshoot of Jones’s White Queen trilogy, which I have not read; they involve instantaneous space travel by use of a device invented by one Peenemunde Buonarotti. (Alert readers, as Dave Barry calls you, will have noted that Peenemunde was Nazi Germany’s rocket facility, and Buonarotti was the family name of Michelangelo.) The Buonarotti Device works, apparently, by destroying the physical body and sending it as electronic pulses to a receiver, where it is rebuilt from local material. There is no actual travel involved. It has taken hundreds of years to develop the Buonarotti Device, and Earth (the Blue Planet) is under a World Government at last. Humankind (all humanoids) is under a Diaspora Parliament, and everything is Culturally Neutral. (Strong Diaspora theory says that everyone looks humanoid because everyone can be traced back to the Blue Planet; Weak Diaspora theory says that everyone looks somewhat alike because we all evolved under similar conditions.)

In the first story, “Saving Tiamaat,” our protagonist is a military officer named Debra, who comes to a station named Speranza (there is Left Speranza, a hollowed-out asteroid for living and working quarters, and Right Speranza, mostly artificial, containing the torus that makes transit possible. “Speranza,” of course, means “hope.”) in orbit around the planet KiAn, home to two intelligent and co-dependent races named the Ki and the An. Put simply, the An are the superiors, even killing and eating the Ki, but after contact with the DP, the Ki had risen with modern weapons against their masters and, in the process, rendered KiAn uninhabitable. The survivors, both races, live on Speranza while their world is being rebuilt by the DP.

The above paragraph illustrates the difficulty, by the way, of turning good future SF into feature films. What is expressed thoroughly and clearly both through exposition and implication in a few paragraphs (the original) cannot be simplified and still keep its essential character intact, or show the richness and nuance of the original. But I digress (always)…

Debra is part of a DP project to “fix” the damage done to the KiAn and their world by contact, and though the DP comprises a number of alien races, the story hinges on cultural assumptions and how dangerous they can be to a relationship. And thereby hangs the crux of the storyline. As an introduction to Gwyneth Jones’s writing, this story serves nicely.

“The Fulcrum” is a defined Buonarotti 4-space region in a nebula in the constellation Orion, and the second story in this collection. Orlando and Grace are alien “extreme tourists” visiting The Panhandle, a Kuiper Belt station in this Deep Space region. They came via “Slingshot Express”—a kind of fast, non-Buonarotti method (physical travel) and are resented by the permanent inhabitants of the station; whatever happens to them, they’re on their own, as there is no law on the station.

There is a living artifact in the Knob part of The Panhandle; it could be alien, it could be a human who unsuccessfully returned from a Buonarotti trip—if it was, it is no more. It’s a pulsating mass of flesh that needs to be “milked” regularly of its silver secretions, secretions that supply 90% of Earth’s helium and “decoherence resistant particles for building q-bits,” and could possibly hold the key to being able to transport non-living materials via the Buonarotti device. And the Panhandle’s resident Deep Spacers want it very, very badly.

In “The Voyage Out,” time has passed and The Panhandle has artificial gravity, and is serving as it was intended to serve, as a nexus for Buonarotti travel to Deep Space. The only thing is, these unwilling colonists, who can take nothing with them but what information is stored in their brains, are prisoners. Lifers and those condemned to die. It’s a cheap way for government to colonize the rest of space. Not that they’ve ever had a successful return. For all they know, all the “colonists” are dead. The government’s job is to send them out; they get a ping that says they’ve landed. That’s all anyone knows.

Ruth Norman was a doctor back home, but here she is nominated by the bots, the AIs that run The Panhandle, as Captain of this group of deportees. Because they are “psychically linked,” they will arrive on the surface of their new planet together. During the weeks of waiting for the Torus (the Buonarotti device’s machinery) to warm up, they will live together on the Panhandle, forming pairs, and groups, and alliances. Because of The Torus’s proximity, they begin suffering hallucinations and other effects. Norman forms a bond (both sexual and emotional) with a 19-year-old woman named Hilde, whose only crime appears to be that she had a “terminal genetic disease.” The liaison takes a surprising turn just before transit, and we, gentle reader, get a sense that the authorities on Earth are in for quite a surprise.

“The Tomb Wife” is an artifact from Sigurt’s World and the culture of the Lar’sz’, a somewhat lizard-like hominid; it’s a possibly-haunted ziggurat that was a tomb. It’s being carried, with other artifacts, to an exhibition, presumably on the Blue Planet, by an interstellar ship. The ship carries a Buonarotti Torus, and this torus is what enables the ship, its crew and passengers and cargo, to travel the interstellar wastes.

As the torus affects brainwaves (the hallucinations from the previous story), so brainwaves, with the aid of the torus, affect reality; space-time appears to be warped and travel is possible. And it is necessary for each traveler to guard his (or hers, or its) imagination, as things thought might become things real. And again, cultural assumptions can be dangerous things.

A nice little collection, most reprinted from anthologies, one from F&SF. I highly recommend this book to any lover of “hard SF”—and you don’t even have to think about feminism to read the stories. But there can be subtext if you look for it.

To order this book and other publications from Aqueduct Press