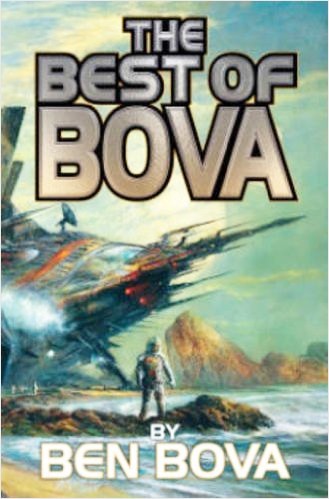 The Best of Bova: Volume 1

This collection’s name, The Best of Bova, is something of a misnomer: Bova explains in the introduction that this is the first of three volumes which will assemble 80 stories. When I think “Best of,” I think of a handful of the “cream of the crop” being selected to present what is actually a non-representative picture of the author. Given that 80 stories is over half and probably three-quarters of Bova’s total short fiction production, this is more like a “Collected Stories” landing between a “Complete” and a “Best.” As such, not everything is golden but this is a reasonably representative picture and maintains a high level of enjoyability that occasionally does break into “Best” levels.

This first volume is a massive collection of 24 stories at 432 pages which begins with his first professionally published SF story in 1960, while the newest piece is from 2014. That first story, “The Long Way Back,” deals with a remnant of civilization trying to rebuild after a nuclear war and, as it points to the need for expansion and exploration, the salvation of space, and the benefits of power satellites, touches on some major Bova themes and is a quite representative piece. Especially for a first sale, while not flawless, it is remarkably confident and professional.

Not every famous series of Bova’s is represented in this first volume but some which are include a trio of Chet Kinsman stories (“Zero Gee,” “Test in Orbit,” and “Fifteen Miles,” later fixed up with others into Kinsman and The Kinsman Saga), a Sam Gunn story, one of the two Sidney Lee stories (later fixed up into As on a Darkling Plain), a pair of Keating/Rungawa stories, and a pair of “Hundred Worlds” stories.

All the Kinsman stories will whet the appetite of the susceptible reader for more, with “Zero Gee” being a particularly well constructed and psychologically interesting portrayal of a “first” in space. The excellent eponymous Sam Gunn story is delivered as an entertaining retrospective “hero of the spaceways” sort of story. The Lee story, “Foeman, Where Do You Flee?,” uses an unpromising premise (a variant of the Atlantis type) and I unfortunately saw the ending well in advance but was delighted in the meantime by an excellently depicted space journey, initial exploratory steps on a new world, and eventual contact with the inhabitants. The Keating/Rungawa tales (“A Small Kindness” and “Born Again”) involve an intelligence agency assassin having a sort of spiritual awakening in the “one man’s test exemplifies the fate of the species” framework. The “Hundred Worlds” tales involve efforts to save the Earth from a predicted momentary but devastating solar instability. The first, “The Last Decision,” feels like a catalog of classic science fiction, being reminiscent of everyone from Asimov to Dickson (actually borrowing a Dickson character) to Silverberg with its empire and emperor, its opacifying windows, form-fitting chairs and all the other “furniture” of the shared world of SF. While some might see this as a negative, I mean it as a positive in that it just seem like quintessential SF in this way. The second, “To Touch a Star,” isn’t particularly compelling in terms of characterization (which is ironic as Bova’s introduction to the story makes the specific point of how important characterization is) but contains a genuine chunk of sensawunda involving a star that’s gone red giant within a Dyson sphere.

It was a glowering, seething ball of red flame, huge and distended, churning angrily, spotted with ugly dark blotches and twisting filaments that seemed to writhe on its surface like souls in torment and then sink back again into the ocean of fire.

Most of the remaining stories are of the short, slight, humorous variety. They include time travel, fantasy with a dragon, cloning, future baseball, earthquakes, and other topics. Perhaps the best of them is the somewhat bitter but very funny “Men of Good Will” which involves a UN inspector trying to figure out how the Americans and Russians on the moon seem to be peaceful while they fight each other everywhere else and learning about very unusual satellites. While not funny and not my favorite piece, “The Man Who Hated Gravity” is also noteworthy for having an almost surreal fabular style. Most of Bova’s work is clean, direct, and realistic (though, as the quote above may indicate, not without its poetry) but this is more overtly stylish.

Of the remainder of non-series, more in-depth, serious pieces, “Bushido” covers a bitter half-Japanese character who wishes to use time travel to change the outcome of WWII, “A Country for Old Men” features longevity and sub-light interstellar voyages, “Risk Assessment” is a presumably intentionally slightly old-fashioned SF romance in honor of Jack Williamson which again makes the case for no risk being greater than that of not taking risks and remaining on Earth, and “Blood of Tyrants” is a very interesting take on possible unintended consequences of attempting to reform gangs.

For people who are allergic to space or demand an emphasis on generally poetic prose, this is probably not the collection for them, but for anyone who loves an emphasis on realism and space, this is recommended. Even for those who fall somewhere in the middle, I think this has enough variety and quality to satisfy. And, of course, for people with a specific interest in becoming familiar with Bova, this serves as an excellent introduction. For those who are familiar with Bova and want a definitive set of his short fiction then, aside from tracking down all his previous somewhat overlapping collections, this is where to start.

Jason McGregor‘s space on the internet (with additional reviews) can be found here.