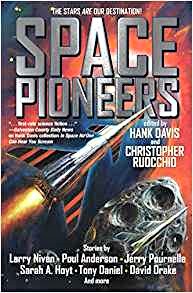 “Third Stage” by Poul Anderson
“Becalmed in Hell” by Larry Niven
“Delilah and the Space-Rigger” by Robert A. Heinlein
“Expedition” by Fredric Brown
“Not Yet the End” by Fredric Brown
“Superweapon” by David Drake
“In From the Commons” by Tony Daniel
“Home Front” by Sarah A. Hoyt and Jeff Greason
“Incident on Calypso” by Murray Leinster
“All the Traps of Earth” by Clifford D. Simak
“The Cave of Night” by James E. Gunn
“He Fell into a Dark Hole” by Jerry E. Pournelle
“What’s It Like Out There?” by Edmond Hamilton
“The Man Who Lost the Sea” by Theodore Sturgeon
“The Parliament of Owls” by Christopher Ruocchio
“Quietus” by Ross Rocklynne
“Men Against the Stars” by Manly Wade Wellman
“Over the Top” by Lester del Rey
“Kyrie” by Poul Anderson

The stories in this collection all deal with human beings in space, from near Earth orbit (“The Cave of Night” by James E. Gunn) to exploration of the solar system (“Incident on Calypso” by Murray Leinster) to the far reaches of the universe (“He Fell into a Dark Hole” by Jerry E. Pournelle). The majority of the stories are reprints, with original publication dates ranging from 1938 (“Men Against the Stars” by Manly Wade Wellman) to 2018 (“Superweapon” by David Drake). Among the previously published works, three stand out as great classics. “Becalmed in Hell” by Larry Niven, from 1965, presents a scientifically accurate portrait of the planet Venus, as well as an insightful look at the psychology of a cyborg spaceship. “The Man Who Lost the Sea” by Theodore Sturgeon, from 1959, is a beautifully written, introspective account of the sensations of an astronaut. “Kyrie” by Poul Anderson, from 1968, combines scientific speculation with fine characterization, resulting in a tragic story with a powerful emotional impact.

Also worthy of note are two very brief tales by Fredric Brown, master of the short-short story. Both “Expedition” (1957) and “Not Yet the End” (1942) feature clever twist endings sure to amuse the reader.

“Home Front” by Sarah A. Hoyt and Jeff Greason takes place on the Moon. The narrator is a teenager, living with his parents in a small scientific research station. When Chinese soldiers invade the station, he makes use of his courage and intelligence to defeat the enemy.

The story begins with an allusion to Robert A. Heinlein. Appropriately, it is written in an informal, realistic style that recalls his classic young adult novels. The authors create a great sense of suspense as the hero risks death to save his family and friends. The motive for the invasion is barely discussed, and some of the situations are contrived, but this has little effect on the story’s value as entertainment.

“The Parliament of Owls” by co-editor Christopher Ruocchio is set thousands of years in the future, when humanity has settled the planets of distant stars. The protagonist is a veteran of the galactic empire’s military. He now works for a private company, but in no less a dangerous occupation. His current assignment is to retrieve a large number of genetically altered human embryos stolen from the company. The hunt leads him into the criminal underground of a colony world, and into the clutches of a barely human cyborg with his own scheme for the embryos.

This is a fast-paced, violent tale, which reads like hardboiled crime fiction from the far future. The main character tortures and kills a man in cold blood early in the story, making it difficult to empathize with him as the hero. The breathless pace of the action-packed plot holds the reader’s attention, even when it relies on clichés of suspense stories.

Victoria Silverwolf has a new handle for her glasses, but it doesn’t match the old one.