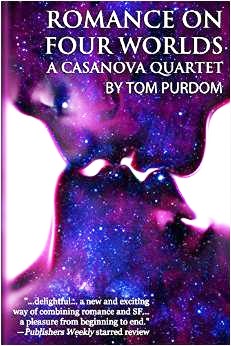 Romance on Four Worlds: A Casanova Quartet, by Tom Purdom, is a collection of four stories that were published in Asimov’s Science Fiction over a span of ten years, from 1995 to 2004. They all feature the adventures of Joseph Louis Baske, a futuristic Casanova whose major motivation in life is to experience intense emotional and sexual connection with women, one at a time until such time as he falls for another. All other motivations are secondary to the fostering of his affairs, but because he will follow his heart at any cost, he is easily embroiled in danger and adventure.

“Romance in Lunar G” introduces Baske, who compares himself to Casanova; in reading the latter’s memoirs, he notes that they could have been written by himself, with the main difference being that, given the scientific advancements that allow people to modify themselves genetically at will, “in his world, character was destiny—not personal choice.”

This first story begins on a cruise ship on the moon. Baske’s current romantic obsession is Malita, who is uninterested in getting involved with Baske but enjoys taunting him with her interest in another. When he finds out that Malita is leaving on a side trip, he is glumly resigned to not having her when he is asked to investigate a hideout—which turns out to be where Malita is headed. Using his infatuation as a pretext, Baske gets himself invited inside—only to discover that it’s a trap, and they are all prisoners. The fun begins as Baske uses his well-honed skills of avoiding pursuit in order to get himself and his companions out of their fix.

“Romance in Extended Time” takes place some years later on low-gravity Mercury. Baske’s interest is ignited in a woman named Ling Chime, a fellow passenger on the ship going to Mercury who is accompanying an Elector with an important vote to cast. The problem is that they have no way to get to the voting place on time. As usual, Baske will do anything to consummate a new infatuation, and he spends an exorbitant sum on a road vehicle.

Of course, anyone crazy enough to take a three-month trip in space just to cast a vote is going to be met by people crazy enough to try to stop that vote from being cast. Their vehicle is met by missiles, and then blocked on the road by a man on an elephant who refuses to let them pass. The confrontations escalate, and Baske finds himself fleeing from pursuit yet again, as he and Ling Chime have angered one of the most powerful families on the planet.

Baske solves his problems as smoothly as he gets the woman he wants. In the process, we learn more about his personal philosophy of love. Even as people in the universe are evolving physically and intellectually by leaps and bounds—so even a few decades make a former generation obsolete and rudimentary versions of those who follow them—what captivates Baske is something beyond those modifications. It’s heartening and touching at the same time as his affections, so quickly changed, are annoying.

“Romance with Phobic Variations” begins on Mars with a couple of muscle-bound hoodlums threatening Baske for the nonpayment of debts by Baske’s current love interest, Aki Nento. Baske is debating whether he should give Nento another loan when Sori Dali, the 15-year-old son of a prior love interest, visits him with a disturbing discovery: Aki Nento is a swindler whose very face is a deception—it’s been modified to resemble a composite of all the faces of women that Baske has ever loved. Sori and Baske set out to swindle the swindler, and the ensuing scrapes make for highly entertaining reading along with more permutations of that earlier question: is beauty internal or external? What makes someone attractive—a choice or destiny, and if it’s a choice, does it make that beauty of any less inherent value?

“Romance for Augmented Trio” takes place on a fifteen-year round trip to the outer edge of the solar system. Baske is on a ship with a brilliant and beautiful love interest named Ganmei, who puts Baske in two different personality-modes at her convenience—a secondary personality who likes to play music, and a baseline personality for when she wants a romantic interlude. This story begins with Ganmei activating Baske’s baseline personality for a different reason: they’re under attack, and soon imprisoned, by an unknown aggressor. They soon discover that their captor is a megalomaniac who is using sophisticated machine brains to defeat their every maneuver. Baske and Ganmei make a plan for incapacitating their captor which involves a sophisticated analysis of their captor’s personality, a little help from some old friends from prior stories, and a lot of luck.

One can’t help but fall for the charm of Joseph Louis Baske, He’s an atypical hero—in a universe where you can design your body as you desire, he’s opted not for physical beauty but for musical talents and fiscal skills. He’s older, shorter than most of the women he likes, and much of his physical dexterity seems to have been developed not through any particularly manly pursuit, but from running away when caught with women he shouldn’t have been with. Still, when he loves, he loves completely, albeit temporarily. He is utterly devoted to his love interest at the moment and will do anything for her, which is endearing. He’s highly intelligent and clever as well, and I found myself enjoying how he gets himself and his love interests out of every scrape they encounter.

Reading these stories one after the other, the themes are pretty much the same, but as a whole they enrich each other. I got increasingly excited by Baske’s adventures as I went through, and I particularly enjoyed a subtle mellowing-out of the writing in the later stories, a humor from Purdom that made Baske even more likable. Overall, the collection is a fun read with some depth, excellent world-building, and some interesting character building that makes the reader wonder what character even is. These are a strong bunch of stories that are even better together—definitely worth a look.