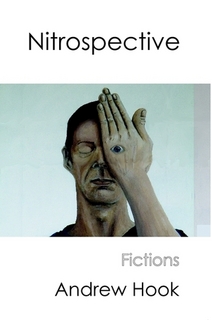 Andrew Hook bills himself as a writer of slipstream fiction, mostly short stories published in small press markets that include mainstream and science fiction elements.  Nitrospective is a collection of his stories that came out late last year, with a mixture of reprints and originals.

Of the unpublished stories, “Outer Spaces” deals with a man having an affair (a not uncommon theme in the collection) who discovers that he is literally living two lives in two different universes.  I found the story well done but generally unengaging.

“Follow Me” is about Claire, who is trying to make it as a musician but whose bandmates don’t necessarily agree with her authority as the head of the group.  The details of a group interaction and Claire’s feelings do keep you interested, but the slipstream twist seems to have not real connection to anything else.

I do like “Ennui” a rather different take on what ultimately is a clichéd alien invasion.  It’s set in Paris, and shows both Solange and Francine, two women who see the alien ships above the city and try to go about their lives.  I found this quite the opposite of what the title implies.

“Lauren is Unreal” is about an encounter on a train between Richard and Lauren.  Despite being far younger than him, he is attracted to her.  They end up having a chaste affair as she begins to take over his life.  Again, a well written story that’s very subdued in its effects.

Montgomery muses on the death of his wife in “The Strangeness in Me.”  And muses.  And muses.  I found it very hard to stay with the story and it made very little impression on my at all.

A far better story is “Love is the Drug,” set in a future where pot is legal and where John is given something else from a stranger, a drug called “Conflict.”  It creates conflict in the marriage.  The story has more than a dollop of metafiction, but John is interesting enough to make it worthwhile.

“Caravan of Souls” is about a mysterious caravan (i.e., a mobile home for American viewers) in a British seaside trailer park where a rash of people are walking into the sea to commit suicide.  It focuses on Max, the owner of the park, and his relationship with Alison, a woman with whom he forms an attraction.  It’s an intriguing situation that peters out.

“Snap Shot” works the best.  It’s about Tony Henderson, bitter about a tragedy in his life, who finds a snapshot and puts it up in his office.  Soon he begins to make up a story about this being his girlfriend, elaborating on the details to avoid talking about his real situation.  At the same time, he tracks down and discovers the real person in the photo, which leads to further complications.  The situation is well worth a story and I think this one is a bigger success than most of the others in the book.

Of the previously published stories, there are some very good ones.  “The Onion Code” is about a woman who can tell the future by looking at an onion, and “The Cruekus Effect” has a couple breaking up because of mispronunciation getting out of hand.  “Pansy Blade Cassandra Moko” has a superheroine who is bored with her work, while “The Glass Football” shows how a bit of schoolboy cruelty ends up haunting a man.  My favorite was “Red or White,” about vampires in Victorian London, which goes into new places and shows some interesting variations on the theme, along with “Up,” in which people start floating up into the sky, and “Jump,” about a defense against a killer asteroid.

Overall, I like the anthology.  Some of the stories are quite good, but there are a few weak stories that often go nowhere.  The saving grace is that even with the weaker stories, Hook has an easy-to-like writing style and a knack for characterization that keeps your interest even when you might be disappointed in the end.

If you’re a fan of slipstream, this is an anthology you should consider.

Chuck Rothman’s most recent story, “The Princess’s Kiss,” appeared in Penumbra.  He blogs at http://greatbutforgotten.blogspot.com.