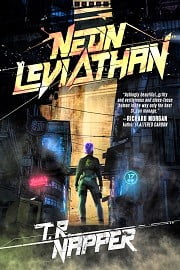 On February 15, 2020, Grimdark Magazine will be releasing a new collection of stories written by award-winning author, T.R. Napper, titled Neon Leviathan. Over the last several years, Napper’s work has appeared in a variety of SF publications, most having received high praise, not only here at Tangent Online but also from the likes of Publisher’s Weekly and Locus Magazine.

In this new collection, Napper gives us twelve stories. In all of them, readers will find humanity adrift in a bleak future as they endure loss and victory, struggle and oppression. In truth, Napper has done his inspiration proud, that being author Philip K. Dick, another master of the dystopian vision—at least in terms of his ability to present the darker side of human existence. Like Dick, Napper prefers to explore those things that we consider to be fundamental to our sense of self, both on the metaphysical and physical levels, just as much as he does the nature of reality and the supernatural. Readers will find few reliable narrators in Napper’s world. Memory here is not only a highly marketable commodity; it’s also malleable and a useful tool for tyranny.

Of the dozen or so fictional lives recorded in Neon Leviathan, only two are original, appearing for the first time in this volume. “Jack’s Fine Dining” is the first of these. The year is 2038 and Minh Nguyen is a Vietnamese refugee living in Australia. He’s taken a job working for Jack Sullivan, the owner of a local soup kitchen in the middle of an impoverished city filled with tenement blocks. Jack’s daughter, Aurora, wants him to turn the kitchen into a proper community restaurant but Jack refuses, saying that it helps their neighbors more to keep the service free. Before long, though, the generosity of the community changes his mind, giving many a small ray of hope in the middle of this indifferent sea that we call life.

One of the things that I liked about “Jack’s Fine Dining” is that it’s not super-saturated with technology. That’s not to say that I don’t like SF that features a lot of advanced tech—I do, and many of Napper’s stories do just that. What I mean is that the minimal use of futuristic machines makes Minh’s struggles hit that much closer to home. After all, it’s set in a time that’s only 18 years from now, a world not too much changed yet from our own.

There are no space ships, no brain implants—just a few advanced notebooks. War is still on-going, displacing humans from their home countries on a grand scale. The gap between the wealthy and everyone else is growing exponentially because human workers have been replaced by machines and relegated to existing only on a meager “universal income.” In this tale, Napper has given us just a snippet of what it would be like to lose everything you have—your family, your home, and even (to a point) your identity—only to wind up with nothing more than your memories in a land that doesn’t want you there.

Minh’s situation stands in contrast to what we find in “The Weight of the Air, The Weight of the World,” the second original. It takes us much farther into the future, all the way to the year 2090, where Karla Tessier-Denk is about to start a new job at the Cultural Adjustment Bureau. Like anyone would be on their first day, she is on pins and needles. Unlike her co-workers (all double-greens), her public shame indicator is green but her political indicator remains in the light orange thanks to a few silly mistakes in college. This makes her an unlikely candidate for such a prestigious job and she still has no idea how she managed to land it. Her new supervisor, Eulalie, is coldly professional and keeps her distance but, as Karla performs admirably in her job of staging social media posts to incite public outrage at appropriate times, the two slowly warm up to each other and eventually start dating. Unfortunately for Karla, this new relationship puts her into a rather compromising position, one that many government organizations would love to turn to their advantage in order to keep the public clueless and docile.

What really struck me was the absolute government control and the lack of free will that people have in Napper’s future Earth. The difference between 2038 and 2090 is frightening, in part because the general atmosphere of tyrannical government control is entirely plausible. Another aspect that makes it so disturbing is that, in 2038, Minh could rest assured in the knowledge that his memories were his. In Karla’s world, government control and technology have gone astray to the point where individual thought is punished with virtually inescapable poverty, one’s personal information is kept on public display to shame people into compliance (something encouraged by the authorities), and memories are tweaked or even outright deleted—all to maintain control over the masses. Karla is introduced as a “screw-up” from the get-go; she herself tells us this. We get a little more information about why she feels this way when she explains to Eulalie the reason that her political color is in the orange. But while Karla never questions this herself, the reader is left to wonder whether her feelings about herself are real or if they’re just what the government wants her to believe about herself. In other words, are her memories of failed attempts to incite revolution in college real or just another example of “cultural adjustment” to keep her quiet? Ultimately, the reader feels for Karla, who might hate the system but, in the end, accepts that she has no choice but to participate.

In reading this collection, I’m reminded of a quote from Orwell’s Animal Farm, in which the old donkey Benjamin says “Life will go on as it has always gone on—that is, badly.” There are some humorous moments, such as when Col and Jack steal a woman’s shoes in “Ghosts of a Neon God,” along with one or two noir-style tales like “A Strange Loop,” but every story seems to emulate this one Orwellian quote in one way or another. And that, I think, is the appeal of Neon Leviathan. The malleability of identity and perceived reality aside, life always goes on as best it can. It might not be glorious, it might not be happy, it might not even be what we’ve been made to believe it to be, but—in the end—humans will persevere in whatever way they can, just as they always have.