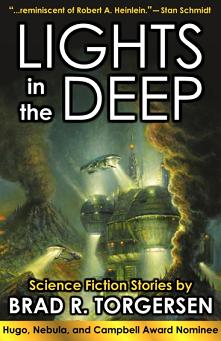 All ten of Brad’s stories are a joy to read, full of realistic characters facing horribly difficult challenges and plots that twist in delightfully unexpected ways. Settings vary from the bottom of the ocean to interstellar space, near future, far future and alternate realities, and even a few include aliens. Every story is what I would call “hard” science fiction, built around a core of possible, if not projected, science and technology. However, what I found most compelling to Brad’s stories is his unyielding belief in what science fiction should be, a philosophy he best describes as follows:

“Life is depressing and hopeless enough, without imbibing further depression and hopelessness through story. I don’t care how realistic people like to think that is. It’s not what inspires me, or makes me love and cherish a book or a television show or a movie. When I am imbibing fiction, I want to be inspired. I want bold tales, told boldly. I want genuine Good People who, while not perfect, are capable of rising beyond their ordinary beginnings. To make a positive difference in their world. Even when all hope or purpose might seem lost. Because this is what I think fiction—as originally told around the campfires, through verbal legend—ought to do, more than anything else: Illuminate the way, shine a spiritual beacon, tell us that there is a bright point in the darkness, a light to guide the way, when all other paths are cast in shadow.”

The two stories I found most compelling are “The Chaplain’s Assistant” and “Chaplain’s Legacy,” the second being a longer sequel to the first. How do you teach alien mantes, a warrior race that had nearly destroyed human civilization, about the concept of God when they have none themselves? This is the challenge facing the Chaplain’s Assistant, Harrison Barlow, when a mantes scholar comes to him asking to understand. If he succeeds, the mantes will not exterminate the rest of humanity, at least for now. But Barlow faces a daunting hurdle in that he has no faith of his own. And it’s not just the scholars he must convince, but the queen mother herself. A superb tale of personal loss, survival amidst violent chaos and unexpected transformation when the only option left is to take a leap of faith.

Both of these stories are excellent examples of the fine work to be found in this solid, entertaining collection of pure quill science fiction stories from a writer deserving of wider attention.