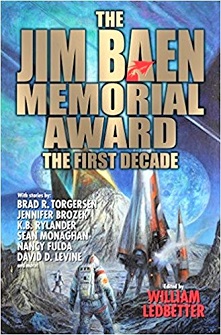 “A Better Sense of Direction” by Mjke Wood

The Jim Baen Memorial Award is a collaboration between the National Space Society and Baen books to award writers whose stories advance the NSS’s goal to further the cause of space exploration and settlement. In keeping with the nature of the Baen contest, these stories are all near future, next step, tales with an eye towards expanding human presence to the larger solar system. The worst of the stories is very good and the best are truly wonderful. Since all have been previously published, I will provide a thumbnail sketch and brief opinion of the contents.

The book kicks off with “A Better Sense of Direction” by Mjke Wood. On humanity’s first interstellar voyage, it turns out that girls can sense folded space when they aren’t in a gravity well. While the story is clever and fun, it is nothing special.

“Letting Go” by David Walton is set on the moon at the completion of a trans-lunar tunnel connecting the near side of the moon with the large h-3 deposits on the dark side. When the protagonist’s daughter is endangered in an accident he has to find a way to save her. The storyline parallels the process of watching children grow and become independent. The story is touching and in the mold of the golden age writers.

“Cathedral” by Michael Barretta is my personal favorite in the collection. It is beautiful and inspiring with the cathedral acting as a perfect metaphor. In it an astronaut deliberately ditches on Mars in an attempt to jumpstart the space program. The story predates the publication of “The Martian” but shares a similar feel.

“Space Hero” by Patrick Lundrigan is good, but not great. In the classic vein of self sacrifice, an astronaut who got lucky once decides to play hero when a Disney space liner suffers an emergency. The story highlights the nature of heroism and what makes a hero.

“That Undiscovered Country” by Nancy Fulda is based on the premise that senior citizens would make good spacefarers. When a rival group plans a diplomatic coup to take over the geriatric’s space station, the members have to find a way to retain their station. This is a good story about freedom and senior independence with an sf element. Well written.

“Taking the High Road” by R.P.L. Johnson. Excellent mix of tech and good old ingenuity. Great piece. A mission to Mars goes wrong and the group must figure out a way to survive. This story, in my mind, exemplifies the vision of the Baen contest. It involves ingenuity and the willingness to take risks.

“The Lamplighter Legacy” by Patrick O’Sullivan is a strong piece touching on motivation and our dreams. The story is a parallel to the push of Space-X etc. In it, a young space blogger finds out that Lamplighter (e.g. Elon Musk) plans to use the blogger’s ideas to get humanity out into space. The final coda feels like it is missing a little more to be fully realized. I got all the pieces but felt that the reader should have just a little more guidance. It remains a powerful story none-the-less.

“Low Arc” by Sean Monaghan. A damaged moon lander and wounded friend means the protagonist has to make do with the resources at hand. The story is clever and the need to use ingenuity to solve a life and death problem is classic golden age SF.

“We Fly” by K.B. Rylander. A very interesting story about an uploaded human intelligence that wakes up to a glitch. It is almost great, but lacks…something.

“Dear Ammi” by Aimee Ogden. When a corporate asteroid miner has an unexpected visitor, she must decide what to do. This is a short piece about life on the margin and the choices we make for others. It is OK, but didn’t resonate with me.

“Citizen-Astronaut” by David D. Levine is a good story similar to others in the collection. In it, a space journalist helps to save the Mars program after a meteor strike. It highlights the yearning to colonize the solar system and reach further.

“Gemini XVII” by Brad R. Torgersen. An alternate history piece about the first black astronaut and the first female cosmonaut. When both suffer mechanical difficulties while competing in the space race they must work together or die. Torgersen does a good job of presenting the pressures of minority individuals to represent the entire group and does so without becoming maudlin or self-pitying. The solution is solid and the story is a good read.

“Scramble” by Martin L. Shoemaker is a well written point of view piece that describes an EMS rescue on the moon. As is the standard for this collection, the focus is on individual heroism and sacrifice.

In “To Lose the Stars” by Jennifer Brozek an aging asteroid miner finds the remnants of a pioneer in asteroid mining and has to decide what to do about the claim and the body. I thought that the ending was too easy and skirted the moral dilemma instead of confronting it.

“Cylinders” by Ronald D. Ferguson is told from the viewpoint of a robot who was built to resemble the researcher’s dead husband. As the researcher tries to upgrade him and feeds him her husband’s memories, the robot, Jerry, starts to understand affection for the researcher’s daughter. When a crisis arises, Jerry finds motivation from an unexpected source.

This collection is a must read for those who dream of space colonization in our lifetimes. It encapsulates the challenges, risks, and sacrifices that will be integral to pushing the human race into the solar system. Baen delivers exactly what it promised and will be a big hit with the target audience.

Robert L Turner III is a professor and is currently teaching an honors course on science fiction and the Grand Tour.