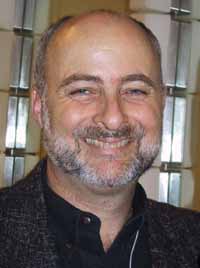 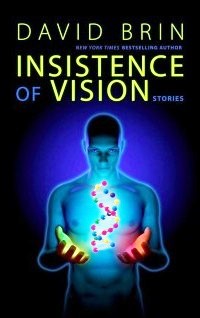 I’ve been a David Brin fan since I first read Sundiver nearly thirty years ago, and while I thoroughly enjoyed every subsequent entry in his Uplift series, I couldn’t begin to tell you what they mean. I’m not sure if this is good or bad—only that maybe Brin is a better writer than I am a reader.

Beginning with the essay “The Heresy of Science Fiction,” Brin attempts to do what many an SF author before him has attempted—to define exactly what Science Fiction is. Building a logical chain from simple tribal campfire legends all the way to present-day writers, he lands upon the idea that maybe Science Fiction isn’t even the right term. Maybe we should call it speculative history, with some stories “looking back” while others “look ahead,” or just “right now.” He also touches on an idea of my own that maybe Science Fiction is really just a sub-set of Fantasy, since we are all dealing in the fantastical—only this sub-set works with physical laws. In the end, he opts for the idea (as do I, mostly) that much of the best science fiction is forever optimistic about the future of humanity, which was a defining characteristic of Golden Age works. From this he works outward to the six basic divisions of this book: What We May Become, How We’ll Endure, When We Overcome, Who We’ll Meet, Where We Will Go, and as a tagline, Why We’ll Persevere.

The first story of What We May Become, “Insistence of Vision,” takes our love of technology, and the subsequent erosion of our privacy, in a new direction to pose a possible solution to society’s growing incarceration problem. Novel and enjoyable.

“Transition Generation” is again about our embrace of technology, but also about how it changes us in the process. Every generation takes for granted the ease of their own lives as compared to their ancestors, but envies the easy life of the one after.

“Chrysalis” is a story I reviewed on first publication, and I repeat those comments here: Starting out as one kind of story, it quickly moves to another, intermediate phase, and at last settles into something entirely different. If that sounds like the life-cycle of a butterfly, well… Like Ray Bradbury’s identically titled story, we have a man who is undergoing a transformation from one form of human into something else, because SCIENCE. While the Bradbury ending was satisfying in an escapist way, Brin’s is less informative and ultimately more powerful.

Next up, “Stones of Significance” is a story about what comes after the Singularity. Godhood, apparently. Assuming it’s not all an illusion.

Last in this section is “News from 2035: A Glitch in Medicine Cabinet 3.5,” and is a short-short in the form of a press release from a company about a defective product.

First up in How We’ll Endure is “The Logs.” It, along with “The Tumbledowns of Cleopatra Abyss” and “Eloquent Elepents Pine Away for the Moon’s Crystal Forests” form a trio of unconnected stories about life under Coss rule after they conquer Earth. The stories are at once pessimistic and ultimately (Brin, apparently unable to control himself) unrelentingly optimistic.

When We Overcome begins with “Mars Opposition,” a story about what happens when the inhabitants of Mars finally take offense to us dropping rovers on their homes. The scene with Bill Nye is hilarious. I’m fairly certain the narrator in this first-person tale is Brin, himself.

Can one person really make a difference? While It’s a Wonderful Life may have answered the question for many, Brin takes another stab at it in “A Professor at Harvard.” One man, in the right places, at the right times, might change everything.

In “I Could’ve Done Better” is one of three collaborations with Gregory Benford in this book, and takes the concept of “one man changing everything” to its logical extreme. Apparently, even an unrepentant womanizer and loser can do better given the right circumstances. I love the title, as it is both a complaint and a boast.

“Paris Conquers All” is a story by Jules Verne (as told to David Brin and Gregory Benford) and is the second of three by the two. What if the Martians of H. G. Wells’ imagination really invaded? What if they attacked Verne’s home in the process. Not even a contest.

“A retrospective by Jules Verne” is the third collaboration, and is again a first-person narrated by Verne. Both are wonderful in the use of Verne’s turns of phrase and cadence. This one is a simple description of life after the invasion, and optimistic to the end.

Who We’ll Meet begins with “Fortitude,” one of Brin’s self-described “think-pieces” about Earth’s entrance (or exit, as the case may be) into the Galactic Federation. In matters of genealogy, humans always seem to find the back door.

It’s no fun being pulled over by the cops—even less so when you are traveling a fair fraction of the speed of light. And in “An Ever-Reddening Glow” it’s for polluting, no less.

Set in the Erthumoi universe of Isaac Asimov, “The Diplomacy Guild” is ultimately a story about keeping the neighbors happy.

Last in this section is “The Other Side of the Hill.” When you leave your polluted planet to search for a new home, what will you find? And what will anyone coming to your abandoned home think about what you left behind? The grass is always greener, indeed.

Where We Will Go is a section devoted almost entirely to adventure, and starts with a novella from the Uplift universe entitled “Temptation.” Like much of Brin’s works, there are many levels at work in this story—temptations in many forms, though all about the same thing… giving up. The one thing humans—and dolphins—don’t do well.

“Avalon Probes” is another short-short about the folly of being first. Still… sometimes “slow and steady wins the race.”

“Six-Word Tales” is just that—a complete story in six words. Here he gives us a dozen he entered into a competition, the last being the winner. I would go ahead and present it here, but copyright issues about “reproducing a complete work” apply.

“Reality Check” is an attempt (and a successful one) at having the reader become a part of the story. Recursive storytelling at its best, and a possible answer to Fermi’s Paradox.

Why We’ll Persevere contains just one entry—Brin’s essay, “Waging War with Reality.” This, and his opening essay make fine bookends for a group of optimistic stories spanning his entire career. The premise that there is no real science without imagination is a truism without question. This is also the fulcrum on which science fiction balances—imagination without science is not science fiction at all, but part of the larger genre of mere fiction, literary or otherwise.

Every time I read good science fiction, I learn something. Either something about science, human nature, or the nature of reality itself. Brin is a scientist, after all, and all scientists are teachers at heart. All good writers of science fiction should strive to be no less. Brin succeeds on all fronts, and if you like your SF hopeful, with a side order of forward-thinking “what-ifery,” this is the collection for you. Highly recommended.