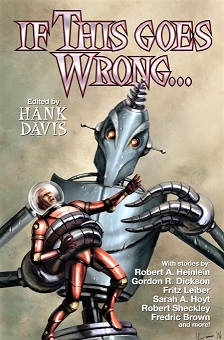 If This Goes Wrong…

“Complaint” by Robert A. Heinlein
“Moxon’s Master” by Ambrose Bierce
“Whiskabroom” by Alan Arkin
“Computers Don’t Argue” by Gordon R. Dickson
“The Snowball Effect” by Katherine MacLean
“Well Worth the Money” by Jody Lynn Nye
“Tic Toc” by Sarah Hoyt
“Day of Truce” by Clifford D. Simak
“A Subway Named Mobius” by A. J. Deutsch
“Experiment” by Fredric Brown
“Manners of the Age” by H. B. Fyfe
“The Dwindling Sphere” by Wilard E. Hawkins
“The Creature from Cleveland Depths” by Fritz Leiber
“Time Fuze” by Randall Garrett
“—And He Built a Crooked House” by Robert A. Heinlein
“Instinct” by Lester del Rey

Assembled by the same editor as Worst Contact, If This Goes Wrong… is similar in the sense that it contains stories that span more than a century starting with an 1893 piece by Ambrose Bierce and ending with a new story by Sarah A. Hoyt. The emphasis is on works from the 50s with a scattering from the 40s, 60s and other periods. Represented in the text are authors such as Heinlein (twice), Dickson, with an all too prescient piece, Simak, Fritz Leiber, who foresaw the current smartphone addiction, and Lester del Rey with a beautiful story titled “Instinct.” It also includes a number of gems from lesser known writers, notably “Experiment” by Fredric Brown and “The Dwindling Sphere” by Wilard E. Hawkins which I recall reading as a child. All the texts are centered around unexpected consequences and tilt towards the humorous. Sarah Hoyt’s “Tic Toc” is the only original story in the collection and is based on the premise that the president of the United States was replaced by a robot in the 80s. Told from the point of view of the president’s repair man, Hoyt uses the task of fixing the robot after an assassination attempt as a means to comment on political stagnation and the feeling of alienation so commonly felt by recent voters on both sides of the political divide. Her story echoes concerns about the “deep state” that have recently come to the fore of the political debate and the sense that our leaders are not what they seem. The conclusion fits well with the feel of the previously published pieces, but leaves open some interesting areas so that the reader has to wonder about all the events that occurred “off screen.” The result is a strong collection with a number of clever stories that deserve to be reintroduced to the public. For those who enjoy the Golden Age of Science Fiction and have a sense of the absurd this is a definite buy.