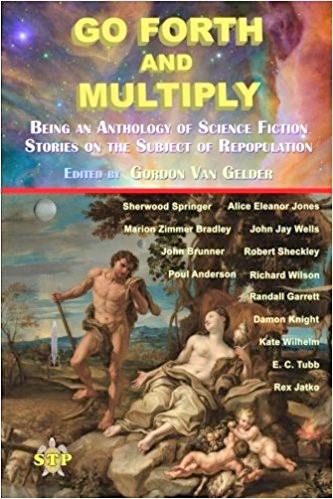 Go Forth and Multiply:

“No Land of Nod” by Sherwood Springer
“On the Care and Breeding of Pigs” by Rex Jatko
“Created He Them” by Alice Eleanor Jones
“The Windows of Heaven” by John Brunner
“The Queen Bee” by Randall Garrett
“Eve Times Four” by Poul Anderson
“The Girls and Nugent Miller” by Robert Sheckley
“Prime Essential” by E. C. Tubb
“Not with a Bang” by Damon Knight
“Another Rib” by John Jay Wells & Marion Zimmer Bradley
“Mother to the World” by Richard Wilson
“Where Late the Sweet Birds Sang” by Kate Wilhelm

In a majority of the stories, a few survivors—sometimes as few as one man and one woman—seek to continue humanity’s genetic legacy in the face of the physical challenges of a post-apocalyptic world, and the socio-moral challenges of inbreeding. Many authors present taboos as a luxury to be reconsidered under such dire circumstances. Editor Van Gelder dunks the reader right into the theme of incest by opening the collection with “No Land of Nod” by Sherwood Springer. “On the Care and Breeding of Pigs” by Rex Jatko comes next, presenting quite the case for polygamy. Jatko’s story brings much to the table, touching on classism, religion, and specialization as young Roy comes to terms with being only one of two men, and being outnumbered by willing women besides. “The Girls and Nugent Miller” by Robert Sheckley asks what might happen if the Eves of the story refuse to pair up with Adam. “Another Rib” by Marion Zimmer Bradley and John Jay Wells asks how humanity might persevere if only men survive—and the answer, along with Bradley and Well’s treatment of prejudice and reconciliation—speaks well to a modern audience. “Where Late the Sweet Birds Sang” by Kate Wilhelm takes on infertility and cloning. Thoughtful characterization across generations of clones and detailed descriptions of the world’s collapse and the survivor’s well-orchestrated response make Wilhelm’s story a great choice to close out Go Forth and Multiply: Twelve Tales of Repopulation.

A few brave stories explore neurodivergent challenges, from mentally handicapped to psychopathic. In “Mother to the World,” Richard Wilson treats the mentally handicapped “Siss” with compassion, carefully showcasing the neurotypical protagonist’s flaws alongside her strengths. In “The Queen Bee,” Randall Garrett’s psychopath, referred to in the title, nearly destroys the colony, leading the colonists to decide on an equally harsh response. Damon Knight brings his own twist to the issue in “Not with a Bang,” where a mysogynist attempts to prey on a woman whose connection with reality is loose, at best. Don’t worry—the mysogynist gets his own horrific ending.

Alice Eleanor Jones takes a closer look at misogyny in “Created He Them,” where wife Ann continues to suffer under her husband’s emotional, verbal, and physical abuse because they are one of the few couples left who can bear children. “Prime Essential” by E. C. Tubb throws potential in-fighting out the space portal by re-wiring colonists’ instincts into something perhaps inhuman, or simply more primal.

“The Windows of Heaven” by John Brunner adds further variety by approaching repopulation from a more basic level. When astronaut Arkwright suddenly finds himself the only remaining human, minus any “Eve,” he comes up with a unique way of continuing Earth’s legacy of life. “Even Times Four” by Poul Anderson also bucks the usual solutions, poking a bit of fun at SF clichés as he sets up the twist ending, adding much-needed humor to a dire topic.

Van Gelder’s experience as an editor shows in Go Forth and Multiply: Twelve Tales of Repopulation, taking a specific but intriguing theme and filling it out with variety representative of classic SF.

[Editor’s note: Editor Van Gelder writes, as part of the introduction to this collection, that the late Bob Shaw’s 1966 novelette “Call Me Dumbo” was not included. In his own words: “I note with regret that I was unable to secure the rights for reprinting Shaw’s story in this book.” For a review and commentary on this story, it can be found as one of the entries in the Classic SF/F section at the top of Tangent Online’s homepage, or by clicking on this link.]