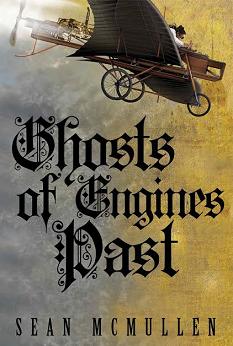 Ghosts of Engines Past

This is a collection of twelve previously published stories by Sean McMullen, all of a steampunk style. However, those who adhere to a strict view of steampunk meaning Victorian-era, airship-flying, goggle-wearing, steam-powered adventure stories will be rather disappointed in this collection, I’m afraid. These stories can only loosely be termed steampunk by that definition. The author stretches the definition to any era where technology is used outside its norm, and the plucky gumption of invention is invoked.

The stories vary widely in era, from medieval to modern, and include time-travel. The stories vary widely in style and though well-crafted, most seem a bit lacking in heart and soul, to my taste. They are, however, very original, often containing ideas I have not run across in my years and years of copious reading, so that’s something. On the downside, several meander quite a bit before getting to the point of the story. A prime example of this is “Electrica,” which could be considered more steampunk than most, but takes almost three-quarters of the story before getting to the meat of it. It had a delightful idea at the core, but took its sweet time getting there.

Two stories that did seem to have heart and soul, and must be called out, are “Voice of Steel” and “Tower of Wings.” The former deals with a sword that acts as a radio that works through time, which allows a woman to speak to a scientist in the past, giving him ever-advancing technology. This serves to change her future, but she still ends up being the one to speak to him each iteration. He keeps a journal, and she reads from it, knowing what new technology she much teach him next in order to solve her current time’s issues. The segues into each new future are deftly handled, the futures are nicely imagined, and the ending was quite satisfying.

“Tower of Wings” is a different kind of love story, one with a strong female protagonist who is a scientist obsessed with flight. Since this is the middle ages, this is somewhat problematic for her. Unfortunately, its ending is somewhat marred, because McMullen adds a superfluous explanatory paragraph apparently because he doesn’t trust the reader to understand what really happened.

“Dragon Black” has a wry wit, which should not be surprising, since it is about a society where librarians rule by dint of duels to the death. This story is a prequel to his novel, Souls in the Great Machine. It is hard, however, to really call this steampunk.

One other story worth mentioning, as it is at least tangentially steampunk, is “Steamgoth.” It is set in modern times, but does involve those who are practicing steampunks. A crashed, though well-preserved heavier-than-air craft is found and some steampunk fans seek to restore it and see if it can fly.

All in all, this is a mixed bag of stories – all are well-written, but I would have to caution those who are looking for “pure” steampunk.