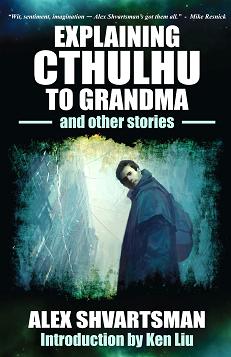 “Explaining Cthulhu to Grandma”
“The Rumination on What Isn’t”
“Doubt”
“Spidersong”
“Things We Leave Behind”
“The Epistolary History”
“A Shard Grows in Brooklyn”
“Requiem For a Druid”
“Nuclear Family”
“Bedtime Story on Christmas Eve, 1,000,000 AD”
“Seven Conversations in Locked Rooms”
“High-Tech Fairies and the Pandora Perplexity”
“The Keepsake Box”
“The Field Trip”
“Superior Firepower”
“Life at the Lake’s Shore”
“The Take”
“The Dragon Ships of Tycho”
“A Brief Respite From Eternity”
“A Thousand Cuts”
“Ravages of Time”
“Price of Allegiance”
“The Tell-Tale Ear”
“The Miracle on Tau Prime”
“The Tinker Bell Problem”
“True Love”
“You Bet”
“The Far Side of the Wilderness”
“Worldbuilding”
“In the Wake of the Storm”
“Putting it all Together”
“Dominoes Falling”
“Notes on the Game in Progress, Played Almost to a Draw”
“Small Magics”
“Icarus Falls”
“Coffee in End Times”
“The Hourglass Brigade”
“A One-Sided Argument”
“How Earth Narrowly Escaped an Invasion from Space”
“Fate and Other Variables”

Explaining Cthulhu to Grandma and Other Stories is a collection of 40 speculative fiction stories by Alex Shvartsman, with an introduction by Ken Liu. A majority of the stories are reprints from professional markets, with two previously unpublished stories:

In “Small Magics,” a pixie village finds itself under attack by gnomes who crave nectar that the pixies harvest for food. Humble teacher Windram must convince the rest of the pixies that they are strong enough to resist the gnomes and save the hostages. This story lacks internal conflict for the main character, but has a bit of fun problem solving and magic.

In “The Hourglass Brigade,” two time travel agents go on a simple mission, but one of them proves to be a danger to the time-line and their parent organization, the Hourglass Brigade. A strong, interesting protagonist drives this story of emotional attachment and tangled causation.

Shvartsman’s stories range from humorous to frightening and run the gamut of science fiction and fantasy. Shvartsman grew up in Russia and often draws on his background and religious knowledge to add unique flavor to his works. The collection shows a keen sense of humor and a flair for dialogue. Several of the best pieces use elements from both science fiction and fantasy.

The title story, “Explaining Cthulhu to Grandma,” is a comedic fantasy that was included in Tangent Online‘s 2013 Recommended Reading List. The magic pawn shop and its mother and daughter owner team feature again in “High-Tech Fairies and the Pandora Perplexity” and the two stories are top-notch urban fantasy humor. “The Tell-Tale Ear,” a flash fiction piece poking fun at unethical advertising, and “How Earth Narrowly Escaped an Invasion from Space,” which is about cats in spaceships, round out the best of the humorous stories in this collection.

On the serious side of the spectrum, “Spidersong” will give the reader creepy vibes, while “Seven Conversations in Locked Rooms” and “Icarus Falls” provide thoughtful science fiction tales with highly sympathetic protagonists. “Notes On the Game in Progress, Played Almost to a Draw” straddles the line of comedy and social commentary. In the same vein, “The Epistolary History” is a concise time-travel story that is fascinating for its irony and alternate time-lines.

Overall, Explaining Cthulhu to Grandma and Other Stories is a solid, quality collection worthy of a speculative fiction fan’s bookshelf. Shvartsman is a prolific author whose stories continue to impress.