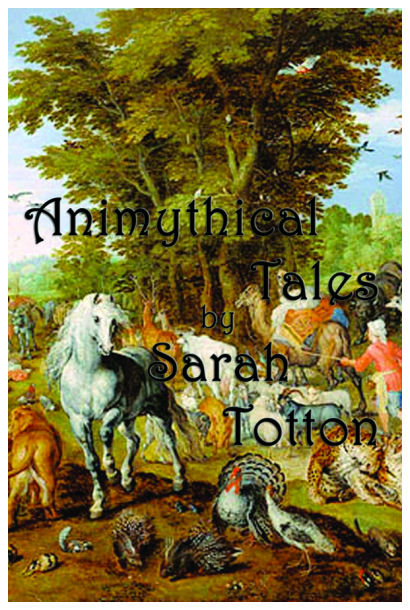 “A Fish Story”
“The Man with the Seahorse Head”
“Flatrock Sunners”

Animythical Tales, the new collection of short stories by Sarah Totton, was my introduction to this emerging writer’s work, and while I was skeptical at first because of the collection’s rather dull title, I came away impressed. Who knew.  You really should never judge a book by its cover (the blurry stock image on this one doesn’t help get the reader excited, either).

The collection mostly includes reprints of stories that have been published in magazines and anthologies, but includes three new stories: two that are unique to the collection, and one unpublished at the time of the collection’s release but later published in Polyphony 7. The latter, “A Sip from the Cup of Enlightenment” was one of my favourites in the book. It’s a perfect example of why I found Totton’s work to be so intriguing and alluring; it’s fantasy that challenges the reader in unfamiliar, surprising ways.

The tale follows a temp history instructor, Anders, at the Gwyntog School in Congaree, a fictional area (country?) in Europe. Anders has left his family in England for unspecified reasons, and ends up embarking on a surreal, almost accidental, search for omniscience on the school grounds, when he comes upon two historical relics in an abandoned dormitory. The story unfolds like a cascade of subtly placed layers of meaning, and by the end of my first read of it I was, I admit, quite confused as to what exactly had happened. That this didn’t make me dislike the piece is testament alone to Totton’s skill.

She uses the slowly fracturing narrative to reflect a man stumbling, like some junkie initiate, into the viewpoint of prophecy (precognition and omniscience), and finding himself terrified by it. Anders is the perfect protagonist for this tale because it’s about the search for Truth, as defined by his colleague Pask; “Truth requires faith. Knowledge does not.” Anders and Pask, as instructors, disseminate knowledge, but both become involved in the search for an ultimate Truth, which was the provenance of the historical Oracles of Congaree. Anders, however, is someone constantly fleeing Truth and its implications, lest it lead to his past in England, and whatever it is he is running from there.

The story is gorgeously written, and its imaginary culture effortlessly evoked. It’s a murder mystery, a fantasy, a horror story, and terrifically ominous. It works, despite being eminently perplexing. If anything, I was left wishing she’d written a novella set in Congaree instead of a short story.

“Pelly Medley” is another example of Totton’s thematic obscurity. This is not a writer that spoonfeeds—she makes the reader work and think hard to make sense of a story, and she leaves us dangling when you least expect it. In a sense, this story, and some others, seem almost incomplete, so subtle and ephemeral are they, so beautifully evoking worlds before vanishing with abrupt permanence. The story follows Geoff, an ornithologist isolated on the island of Pen Gwyntog (in Wales, as far as I can tell) studying birds for a university on the mainland. As he begins to go stir-crazy from being the only human on the island, Geoff finds curious changes beginning to occur around him, as what appear to be pieces of his childhood memories begin to find their way back to him.

The writing, as with all of Totton’s stories, is exquisite, infusing the mundane with magic:

“The sunlight, stripped of color by the gray mist that hung over the island, still made its way through the curtains, making the cabin look like it was hung with sheets of drifting sand.”

Even when set in what is ostensibly the “real” world, Totton’s writing is gifted with this intangible but lovely quality of transformative fantasia that reminds one of a child’s imagination and perspective (both dark and light), lensed through an adult’s language. This makes the appearance of the inexplicable in these stories somehow feel seamless, right. “Pelley Medley” effortlessly captures Geoff’s sense of nostalgia for a life lost to the ache of adulthood, and his slow, beautiful and yet implacably sinister slide into acceptance that he is letting go of his present and returning to the hazy realities of his childhood. It’s unclear whether he’s just losing his mind being alone on the island or whether he’s actually experiencing something magical—and it doesn’t matter a whit. Once again, I felt almost short-changed by the short length, by the itch that this story wasn’t complete, but not quite.

The final new story in the collection is also the lightest of the lot, a breezy and irreverent comedy of manners called “A Little Tea and Personal Magnetism.” It was probably one of my least favourite pieces in the book, but it’s a delightful piece all the same, genuinely amusing and unmistakably English (as one might be able to tell from the title). The story follows the trials of George Y. Whynot, “Wordsmith and Philanthropist,” and his urgent attempts at becoming a brilliant and famous writer, all of which leads to some fantastically farcical happenings (few of which involve actually writing anything).

It’s not often that prose fiction can make me laugh, and it’s almost always been British writers who have coaxed it out of me (Douglas Adams and Terry Pratchett spring to mind). In this, Totton proves once again that British humour works as well on the page as anywhere else. The story didn’t make me laugh out loud, but I found it genuinely funny, and enjoyed the mounting absurdity of the piece, fuelled by the foolish machinations of George, the clueless dilettante.

The reprinted stories are also all, without exception, very good to excellent, and certainly worth your money and time.  “The Bone Fisher’s Apprentice” was a favourite of mine, once again mixing the sinister and the fabulous, the familiar and the unfamiliar, in ways that are most rewarding.

The book itself looks elegant enough on the inside, though, as I’ve mentioned, the cover looks hurriedly put-together and tells a curious reader absolutely nothing about what the stories inside might be like. I was also confused by the omission of an author’s bio anywhere in the book; a curious decision on the part of the publishers. But these are hardly relevant reasons to skip this book. This is a collection worth owning. I look forward to Sarah Totton’s future work.