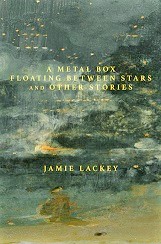 Floating Between the Stars

“A Metal Box Floating Between Stars”

This anthology contains nineteen stories by Jamie Lackey, thirteen reprints and six new stories. Since Tangent doesn’t review reprints, the following will provide a full review of only the six original stories.

“A Metal Box Floating Between Stars”

The twenty-person crew on a spaceship take turns out of stasis for three months each in this SF short. Each crew member only meets the person that wakes them or that they wake during the twelve rotations on the sixty-year mission.

Futaba begins corresponding with a crew member she cannot meet until the ship reaches Alpha Centuri. Bound at first by a common regard for an AI maintenance bot, their relationship grows until an unexpected issue arises causing a change in the shift pattern.

An interesting, character-driven, and hard-to-put-down story. The first paragraph sounded cliché, but by the end of the second page, the story had developed into a page-turner.

Lucy has six months to live in this SF short, unless she gets a new experimental nanobot treatment. But not everyone agrees with her decision to go for it.

The treatment changes her body’s chemistry and her prospects. The consequences prove to be both surprising and far-reaching as she struggles to adjust.

Though other authors have explored this subject matter extensively in other stories, the author’s prose was easy to read.

But for Joan that changed when Tony died. Now she finds herself increasingly lost in the alternate reality she creates. Can she find a balance with her real life?

Lackey has written a simple but well-crafted story. In the end, it lacked enough intrigue to be engaging.

Lackey’s flash SF paints a future where three kids mind-meld into a single consciousness. Authorities develop a pill that will separate them, but can they really stop this evolution.

This was a short but pleasing morsel to make the reader think.

“The Dedication of the Ama Pillay Monument”

Strange and rare scraps of metal draw Ama Pillay to them in this short SF. The pieces tingle in the young girl’s hands and when she brings any two pieces together, they instantly bond together.

She feels compelled to find all the pieces until she has created the whole object. Maybe then she can divine it true purpose.

This short SF had intrigue and a pace that made for a stimulating read.

She waits for the alien ship to arrive and tell her what to do in this SF short. Meanwhile, her family wants to resist the aliens when they arrive, and to reject their offers of help.

The aliens had prepared by converting many humans, like her, prior to their arrival. They instruct her to join the resistance with her husband and daughter. But can she really surrender all her humanity to the wishes of the aliens?

This story rolled out with few intrigues or twists. It lacked the pull to make it any more than another take on alien invasion.

Most of the stories in this collection are set in the distant future and either explore human evolution or our encounters with alien life. Jamie Lackey has a writing style that is both engaging and a pleasure to read.