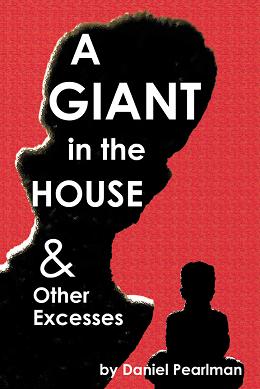 A Giant in the House & Other Excesses

Daniel Pearlman comes to SF with an academic background, and has been publishing fantasy and science fiction short stories in literary small press magazines, with an occasional appearance in genre magazines.  A Giant in the House takes 12 of these stories and collects them together.  I’m sometimes a bit wary of mainstream writers trying to write SF, but the book quickly won me over.

Pearlman writes in the magic realism mode, where there are unexplained fantastic events taking place in the mundane world. It’s a genre that, at its best, is strong and emotionally affecting, but, at its worst, it ends up with a bunch of weird things happening.  The stories here definitely are at the “at its best” end of the scale.

“A Giant in the House” starts it all off with a bang.  It’s a powerful story about a man who remembers how he perceived his father as a giant who lifted him on his  shoulders when he was a young boy.  But, as life goes on, he turns out not to be so big a man. It manages to merge the observation that things in our childhood seem to grow smaller as we age, and that our image of our parents change with it.  This is a superior story that works brilliantly on every level.

Anton Malevich is a member of “The Death Club,” whose job is to tell people that their time is up.  He’s also exceedingly rich and falls in love with hospital administrator Leila, marrying her.  I think the payoff for all this is pretty obvious, but that, strangely, doesn’t keep the story from being an enjoyable look at a man getting what he deserves.

Helga is an older artist in “Hannibal’s Victory,” who is having a relationship with Erika, to the dismay of her pet cat, Hannibal.  It becomes worse when Erika brings Catarina into the household.  Catarina is a rambunctious kitten who disrupts Hannibal’s life, a fact that he makes a big point of complaining about.  Yes, complaining; it’s a talking cat story, with no explanation of why.  Hannibal is a very convincing talking cat and the story delves into Helga’s life and the relationship between the two women.

“Facedowns” is purely literary, and I love the fact that it seems to be hinting at going in one direction, but ends up being something else entirely.  Mel Belcher is an aspiring writer who hosts a weekly poker game.  The others soon realize that his main talent is for plagiarism:  he’s taking the stories they tell around the table and writing them up.  The group sets a trap for him.  It’s about storytelling and I think this is the first time I’ve ever said the ending of a story was disappointing and mean it in a positive way.

In “The Fetal Position,” we meet Jamie, whose mother was positive she would be a girl.  When he was born, though, she claimed he cannibalized his twin sister. As he grows, he discovers she was right, and he keeps getting phone calls from his phantom twin.  The idea is a strong one, and the ending both shocking and logical, but it does go on a bit long.

The biggest disappointment in the collection is “Lyonel Unbound,” which throws a lot of bad things at the title character without any particular purpose.  Lyonel Lambert is about to teach the class that will determine his tenure, and things keep going wrong.  I found his reaction to things unconvincing, with too much crap thrown at him to take the story seriously.

“Two-Time Losers” is also about a frustrated college teacher; it probably shouldn’t have followed “Lyonel Unbound” in the book.  But it’s a much superior story about the world’s worst class of college English students, all of whom are not only hopeless in class, but also have personality quirks that bedevil their teacher Jeremy Hightower.  But their quirks end up saving the day in the end.

The previous two stories had little in the way of fantastic elements, but “Double Occupancy” has plenty.   Harris Trimble finds his apartment is being shared with others who show up when it’s supposed to be empty.  He sneaks home during the day to discover some free spirited love children from the 60s (literally) have taken up residence. The story is a metaphor for escaping into 1960s era nostalgia, and Pearlman manages to avoid going where the story would have gone in another author’s hands.

He’s definitely leaving the ordinary behind in “With Arms Outstretched.”  Mort Fleisher has no respect for his wife Maple, going from one affair to another and treats her like a piece of furniture. When Maple finds out, her reaction is not what you might expect, leading to a special agreement between them that’s odd and somehow logical.

“Refrigerator Blindness” (the one non-reprint) is wickedly funny, which takes the concept that a man can look in a refrigerator and not see things right in front of him unless his wife shows him.  It turns this into a weird little scenario, where that effect shows up in other contexts.  I enjoyed it a lot.

Emily is a teen girl, enamored of “Maria, My Soul Mate,” a store manikin who always wears the most fashionable clothes.  When a strange and creepy man offers to buy her clothes — with a catch, of course — her life takes on some weird changes.
The book ends with “Great White Hope,” where Angie and Jason are stuck as tourists in a small town in Mexico, meeting fellow American Frank Moran, a charming and charismatic ex-boxer much older than the two of them.  Jason mistrusts Frank, and it’s not helped when he finds a mysterious hole in the wall of their hotel room, which may be showing the future.  It’s nicely ambiguous, but I found it a bit long.

This is not standard SF or fantasy, and some of the stories are just mainstream fiction.  But all of them — even the ones I didn’t care for — are enjoyable reads.  Pearlman has a clean, easy style and creates characters with personality and depth.  And his plotting constantly serves up the logical surprises that only a top writer can get away with.

This is a rewarding adventure in reading by a master storyteller.