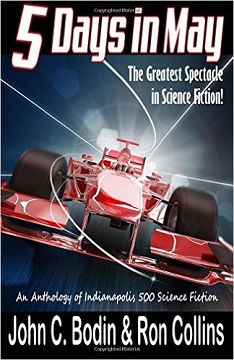 
The Greatest Spectacle in Science Fiction

(An anthology of Indianapolis 500 Science Fiction)

I find it hard to express how much pure enjoyment and fun I got out of this slim volume. It reinforces the truism that you can’t tell a book by its cover. Not that the cover is bad, of course, because it’s anything but. But here’s a little reprint collection by relatively unknown authors coming from a small publishing house, probably destined to obscurity in the larger scheme of things, but which gives more bang for the buck—and per story—than many efforts coming from other more high-profile publishers with more recognizable names to sport on the covers of their higher-priced offerings.

5 Days in May is a pet project of the authors, both racing fans. Begun three years ago, they write and post one story a year with the Indianapolis 500—in some incarnation or other—as the setting and focus of the story. This collection includes five stories, two previously published outside the confines of this project (one of which saw print in Analog), and an original offering especially for this volume.

Using tried and true SF tropes as framing devices, the stories not only showcase the authors’ knowledge of the history of the Indy 500 (which tidbits are fascinating, whether of famous drivers of the past or details of the track itself), but reveal how such framing devices can still be used to good SFnal effect.

“Neighbors on Gasoline Alley” has the race team from Betelgueuse encountering a mysterious problem, and how another race crew comes to their aid, revealing the camaraderie among fellow racers even when they are from a rival team, and even if the rival team is comprised of aliens.

“Speeding” involves time travel and a documentary director going back in time to capture the moment of one of the 500’s most tragic accidents. How history is woven into this emotionally engaging piece makes for a tension-filled read.

“Oh-oh” deals with skullduggery by shape-shifting aliens attempting to rig the 500, for it is the most wagered-upon event in the universe, and how an undercover vice cop tries to thwart their efforts. A good bit of detective fun.

“Ghost of a Chance” tells the human story of a racer from the far future who, through her slowly degrading AI construct (common to all digital records no matter how realistically preserved), tries to capture a part of her true humanity. One of the best in the book and the original piece to this year’s volume.

“The Day the Track Stood Still,” published in Analog in 2003, rounds out the collection. We all know that drivers have a special relationship with their cars, but not quite as one-on-one as Buddy has with Babs, with “her” “Long and sleek with a flash-molded titanium body, a Banshee 250 q-drive power plant, an effective IQ of 245, and a drive-by-wire neural net that sucks beta-blockers like sugar pills, Babs just begs to be driven hard.” When an alien race comes to town with its secretive technology and enters the 500, how can Buddy and Babs hope to compete? Another example of how present day one-upmanship, with new advances in technology, are an integral part of one of the greatest racing events on the planet, the Indy 500, and how it might play out in the future. This time, however, the authors throw in a clever twist…something involving a new kind of…but I shouldn’t give it all away.

Suffice it to say that in all of these easily read stories (absolutely perfect fare for a plane ride—or anywhere else of course) that reader interest is kept high with Indy 500 facts and history unobtrusively woven in, snappy, clever dialogue, and a problem to be overcome or mystery to be solved or a personal quest to be resolved. And we’re given time travel, aliens, a far future 500, super cool advanced-tech – and all with the Indy 500 at the heart of every one.

As I said at the outset, this slim collection of five stories provides a uniformly high level of fun and entertainment, and one does not need to be a race fan to reap the benefits of these classically told tales. Each one stands on its own as a dandy little SF story in its own right, and works just as well for that, thank you.

A note from one of the co-authors, Ron Collins (whose name has been cropping up more and more in Analog and Asimov’s the past few years), says that he and co-author John Bodin’s plan “is to provide a free electronic version ‘upgrade’ from year to year for anyone who lets us know they bought a previous version.” Judging by this outstanding sampler of previous Indy 500 SF stories, this is an offer Indy 500 fans, race fans in general—and SF fans—would be foolish to refuse.