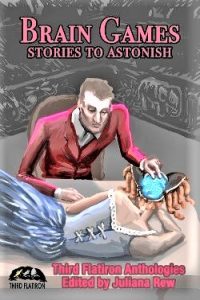 “The Art of the Duel” by Jetse de Vries

“The Disconnect” by Lisa Timpf

“A Sweet Smell of Sheep” by Maureen Bowden

“The Incredible Machine” by Dennis Conrad

“All Your Bases Yada-Yada” by Paula Hammond

“Escape from an Infinite Regress” by C. J. Peterson

“Joey and Rue” by Dominick Cancilla

“A Bronze Giant to Guard Her” by Jenny Blackford

“Mock Me Amadeus” by Justin Short

“US Portal Service” by Brenda Kezar

“The Greatest Toymaker in the World” by Rebecca Fung

“DIY Your Pillow!” by Steve Zisson

“The Best Bra for the Boobs” by Lauren Lang

Two dozen short stories and three works of humorous flash fiction appear in the twenty-ninth anthology from Third Flatiron Publishing. Although the editor’s introduction implies that the stories deal with problem solving, invention, and creativity, the tales are so varied that there is no real unifying theme.

In “Theft, Sex, and Space Pirates” by Brian Trent, unknown thieves steal a shuttle from a mining vessel in the asteroid belt. Suspicion falls upon a member of the crew who may have once been a criminal. To clear herself, she has to figure out the identity of the real culprits, using only pools of spilled water as a clue.

The solution to the mystery is certainly original, but strains credibility. The story’s tone is tongue-in-cheek, which may make the unlikely premise tolerable.

“The Art of the Duel” by Jetse de Vries involves warriors who fight to the death in order to win the honor of serving as bodyguards for the masters of computer networks. The narrator is killed in such a battle, but her consciousness returns in a robotic body, to face her opponent again.

The author blends futuristic themes with traditional arts of war in an interesting way. However, it’s hard to believe that a society with such highly advanced technology would rely on swordplay for protection.

The narrator of “Killer dApp” by Geoff Taylor creates a sinister computer program. Anonymous users pay a fee to bet when a certain person will die, the winner collecting all the money. This results in murders, the killers acquiring their ill-gotten gains without revealing their identities.

The premise is frighteningly plausible, with the narrator carefully explaining how such a system could work. The story’s twist ending is predictable.

In “Minds Unseen” by Ellen Denton, a woman in found in the ocean with sea plants growing from her face. Medical workers fighting to save her life from the bizarre infestation discover that the situation is even stranger than it seems. The premise is unique, but there is little else to the story.

The Grim Reaper appears in “Upcycling Death” by M. K. Hutchins. He tries to decide which kind of death would be most appropriate for a woman who recycles old clothing into new garments for foster children. Their encounter leads to an unexpected change of plans.

This is a gentle, heartwarming story, with a particularly sympathetic portrayal of the incarnation of death. The ending manages to be both unexpected and uplifting, without violating the premise of the tale.

“Perfectly Rational Gamblers” by Henry McFarland takes place in a casino in the near future. Programmers secretly use robots that are almost indistinguishable from humans to earn large winnings. The casino’s chief of security has to figure out a way to beat them at their own game. This is essentially a puzzle story, with a solution that is logical, but does not make for a gripping tale.

“The New Season” by Graham J. Darling transforms the current Covid-19 crisis into black comedy. Multiple outbreaks of viral illnesses kill most of humanity. The few survivors have weird symptoms, such as multiple heads. What little remains of the United States government deals with a sentient virus, who explains how others of its kind have been controlling life on Earth since prehistoric times. Because the virus needs some people around to survive, it offers a way to avoid complete human extinction.

The main appeal of this story is its deadpan portrayal of outrageous events. Given the current pandemic, some readers may find it in questionable taste.

In “Forced Teaming” by Monica Joyce Evans, the recorded minds of three deceased people are temporarily stored in a living woman’s brain, until they can be downloaded into computers. The shared minds help her survive a dangerous situation, but reveal a frightening secret.

This is an effective mixture of science fiction and suspense, with an open-ended conclusion that suggests worse things to follow. The author creates a subtle sense of menace that increases throughout the story.

Shopping carts controlled by artificial intelligence appear in “The Disconnect” by Lisa Timpf. Their self-adjusting programming leads to problems for their users, and an eventual rebellion by consumers. Anyone frustrated by the omnipresence of so-called smart devices will appreciate this telling, if minor, fable about the uses and misuses of technology.

The protagonist of “Numbers” by David Rogers works at an old-fashioned telephone switchboard after the previous operator dies. A call from a mysterious source warns of an impending disaster. The premise of a telephone reaching beyond the grave is hardly a new one, and this story, while nicely written, adds little to it.

A computer hacker accidentally joins a teleconference of demons in “Bad Connection” by M. Richard Eley. As you’d expect, things don’t work out well for him. This darkly comic tale’s wry look at modern technology provides some amusement, if no surprises.

The narrator of “A Sweet Smell of Sheep” by Maureen Bowden is a nymph. She tells the story of how Paris started the Trojan War, revealing her own unexpected role in the event. This very brief version of an old myth has a modern tone that may appeal to some readers.

“The Incredible Machine” by Dennis Conrad deals with a device that allows for instantaneous travel, but at a very heavy cost. This steampunk fantasy with elements of horror can be read as an allegory for the exploitation of the working class, but this does not explain the motives of a self-sacrificing scientist.

The narrator of “Stockholm, 2066” by Joseph Sidari hosts the Nobel Prize ceremony in an empty hall. The reader soon learns the reason for the lack of an audience, and why a discovery that earns the prize for Medicine also wins one for Peace, in a very ironic way.

The story offers some interesting speculative biotechnology. Although one can appreciate the narrator’s sardonic tone, it’s hard to see why the prize would be awarded, even in a satiric manner.

The main character in “All Your Bases, Yada-Yada” by Paula Hammond finds herself in a simulated world. She confronts the programmer, leading to an encounter with an alternate version of herself. This tale of virtual reality adds little to the theme, even making reference to The Matrix as an inspiration.

In “Kwatt Games” by Alyce Campbell, an alien forces a sheriff to solve various puzzles, or have Earth’s population destroyed. The bulk of the story involves her effort to crack these brainteasers.

Some of the conundrums are familiar, others are difficult to understand. In any case, there appears to be no point to the story other than an excuse to present these problems to the reader.

“Escape from an Infinite Regress” by C. J. Peterson involves a scientist attempting to find out if supercomputers are truly intelligent. The bulk of this very short story consists of two machines communicating with each other in a combination of computer language and informal English. Despite some humor and a touch of irony, it makes for dry reading.

“Softlock” by Jess Hyslop offers another version of virtual reality. In this case, a police officer, injured in the line of duty, gets ready to return to work by experiencing violent encounters in VR, in the style of a video game. He finds the simulated world, where he can defeat the bad guys, preferable to the imperfect real world.

The scenes of unreal battles with criminals provide plenty of vivid action. The policeman’s frustration with the impossibility of eliminating crime comes across powerfully. The story seems incomplete, and one might wish to follow the officer after he leaves VR and goes back to his job.

The title characters in “Jerry and Rue” by Dominick Cancilla are a boy and his unseen supernatural companion. The being can manipulate future possibilities in order to make certain outcomes occur. Challenged to demonstrate this power by a bully, the boy makes a simple gesture that sets off a chain reaction of events, leading to extraordinary happenings.

The main interest in this story is the way in which a large number of small actions, working together like the parts of a Rube Goldberg machine, lead to an unexpected conclusion. It is something of a disappointment that the final scene takes place entirely offstage, so the reader doesn’t learn exactly how the bully gets his comeuppance.

“A Bronze Giant to Guard Her” by Jenny Blackford retells the myth of Jason and Medea. In particular, it relates how Medea uses her magic to defeat a huge metal automaton.

Anyone who has seen the classic fantasy film Jason and the Argonauts will remember a very similar battle, although Medea was not involved in that scene. The story is very well written, with an appropriate mythological narrative style, but may seem overly familiar to those cognizant of ancient Greek legends.

A pair of sorcerers revive the skeleton of Mozart in “Mock Me Amadeus” by Justin Short. One wants to use his skills to create music for video games, while the other has his own, hidden agenda.

The story has a great deal of madcap energy, and is likely to amuse both devotees of classical music and fans of rock ‘n’ roll. The revelation of the second sorcerer’s true identity serves as a punchline, but may depend too much on familiarity with a certain popular play and movie.

“Toxic” by Eleftherios Keramidas deals with a book of magic so powerful that it destroys whoever possesses it. The narrator obtains the volume, using modern technology to protect himself, but does not succeed completely.

The most intriguing part of the story is the detailed description of highly advanced equipment that the narrator uses to block the book’s dangerous effects. Other than that, the plot is very simple.

In “The US Portal Service” by Brenda Kezar, mail and packages are delivered via teleportation. A man thinks that a delivery person has been using this technology to enter his home, eat his food, and so on. The truth turns out to be much worse than expected.

This gruesome farce delivers on slapstick and gore, if not much on plot logic. Animal lovers should know that one scene is particularly disturbing.

Appropriate to the season, “The Greatest Toymaker in the World” by Rebecca Fung is a modern version of Santa Claus. The playthings he creates include fully sentient automatons, some of whom decide to go off on their own. The story deals with his reaction to their liberation. It’s a sentimental tale, best suited for those fond of the winter holidays.

“To All the Creatures I’ve Hid from Ethics Committees” by Aidan Doyle is the first of a trio of tiny comedies that serve as dessert. This one consists of the narrator addressing the strange living things he created, such as a fireproof cow. It’s a silly piece with an upbeat mood.

“DIY Your Pillow!” by Steve Zisson is a parody of television commercials for luxury pillows. In this ad, a punk rocker advises the audience to make their own pillows in order to destroy capitalism. It’s a mildly amusing bit of satire.

In “The Best Bra for the Boobs” by Lauren Lang, the narrator is a lingerie model in outer space, dealing with the effects of free fall on her body. This very slightly risqué tale may be best suited for those who find breasts funny.

Victoria Silverwolf has been listening to the station 50s on 5 on Sirius XM in a rental car lately.