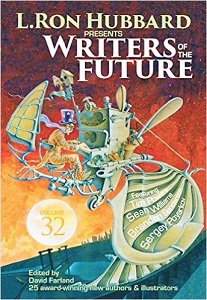 “The Star Tree” by Jon Lasser
“Images Across a Shattered Sea” by Stewart C Baker
“Möbius” by Christoph Weber
“The Jack of Souls” by Stephen Merlino
“Swords Like Lightning, Hooves Like Thunder” by K. D. Julicher
“Squalor and Sympathy” by Matt Dovey
“Dinosaur Dreams in Infinite Measure” by Rachael K. Jones
“Cry Havoc” by Julie Frost
“A Glamour in the Black” by Sylvia Anna Hivén
“The Broad Sky Was Mine, And the Road” by Ryan Row
“Freebot” by R. M. Graves
“Last Sunset for the World Weary” by H. L. Fullerton
“The Sun Falls Apart” by J. W. Alden

Time for another crop of Writers of the Future. The lead story, “The Star Tree” by Jon Lasser tried to be a story about loss and how people react to it. It failed. The idea was good, an extrapolation of trading cards and how they could be used in the future. However, the author spent so much time with feelings and angst, too much was alluded to and never explained. The thread of the tale was lost and I just didn’t care enough to try again.

“Images Across a Shattered Sea” by Stewart C Baker was excellent. Somewhat reminiscent of Le Guin’s The Lathe of Heaven but using technology, the story opens with a pair trying to net shimmering message globes by the Shattered Sea. As the story progresses one finds nothing is what it seems and what it seems changes with almost every paragraph. You quickly care about the characters and the twist at the end is well worth the buildup.

“Möbius” by Christoph Weber is a tightly written mix of mystery and moral questions that literally leaves the ending in your hands. Centering on a world where genetic research is tightly regulated, outlaw labs have sprung up and law enforcement has responded. The characters are well written, the mystery plausible, and the story reads like a high stakes poker game with the characters in a cycle of raising the stakes that leaves you racing through the story. Probably the best of the anthology.

In “The Jack of Souls” Stephen Merlino sets his tale in a land of sword and sorcery around a card table where the stakes are slavery and freedom, life and death. It’s a well crafted refinement of the trope of staking your life on the luck of the cards and the fate that awaits cheaters. “The Jack of Souls” is worth a read for the characterizations, although you do see the end coming pretty early in.

“Swords Like Lightning, Hooves Like Thunder” by K. D. Julicher manages to successfully mix a heady brew of fantasy, animal spirit guides, courtship, and intrigue for a thoroughly enjoyable story of two peoples overcoming initial treachery to become one people. While parts of the story consist of recognizable tropes, Julicher tweaks them in such a way to make them fresh. I especially liked the touches of practicality that made it easy to suspend disbelief, such as one scene set when the characters stopped and camp, one asked another with suspicion why the other was not drinking what was offered. “I only have one cup.” For anyone who has ever camped, it makes perfect sense. An excellent read.

“Squalor and Sympathy” by Matt Dovey explores a world where magical energy is generated by fear, need, and want set against a backdrop of Victorian England and the Luddite movement. In this world, the poor not only work in the factories, they power them as well. Dovey weaves an interesting take on what life would be like in such a world and what might drive a person to go beyond the accepted to find the power to change the system without burning it all down.

“Dinosaur Dreams in Infinite Measure” by Rachael K. Jones starts out appearing to be a depressing tale of a daughter packing up an elderly parent who appears to be slipping into dementia. Nothing could be further from the truth. Instead, the reader becomes swept up in a tale of genetic modification, resurrecting extinct creatures through technology and trash recycling. And mother-daughter bonding. A great story for fans of mad scientists.

“Cry Havoc” by Julie Frost examines the fine line between obtaining justice in an environment where the law does nothing for you and letting oneself rationalize continuing killing in the name of vengeance. When is the war ever over when you have nothing left to lose? Ms. Frost does a good job getting the reader into the head of her main character and the development of a friendship with an an unlikely party. It’s a good read, as is her book Pack Dynamics. Recommended.

“A Glamour in the Black” by Sylvia Anna Hivén is a story of betrayal, loss, and never being able to return to what you once were. The main character is a trader with the ability to be what the person near her most wants. What she most wants is to be the person who she was before she was infected by a parasite in an effort to save her life. It is a dark story and does not end well.

In a somewhat different take on the usual post apocalyptic tale, “The Broad Sky Was Mine, And the Road” by Ryan Row follows the day of a hardened veteran of a war against the heat seeking victims of an unspecified plague. A mix of introspection and action, there is a somewhat pleasant surprise at the end that makes the story worth a read.

“Freebot” by R. M. Graves is well crafted, with an interesting and somewhat timely premise about robots and automation taking over jobs. However, I was unable to suspend my disbelief for the direction the author takes. While anything is possible, the future that Graves postulates is almost impossible. This story illustrates one of my pet peeves with science fiction today, lack of research. While science fiction by its nature is speculation and “what if,” the best work requires some research or knowledge of the area you are writing about to make the story somewhat plausible.

In “Last Sunset for the World Weary” H. L. Fullerton’s setting is the end of the world as viewed from a fleeing starship. The characters are either ultra rich or the hangers on of the ultra rich. One would think that this would be a weighty tale but in fact it reads something like a P. G. Wodehouse Jeeves story without the butler or humor. In other words, it is a serious topic dealt with in a silly fashion, which is unfortunate, because there is some good writing in the story. This just wasn’t a good story.

“The Sun Falls Apart” by J. W. Alden chronicles the interactions of a gifted yet dysfunctional family complete with daddy issues, sibling rivalry and an apocalyptic world that the family might have had a hand in creating. The story tries to address the question of whether cruelty is learned, or part of one’s nature. The journey to the writer’s answer is interesting and worth your time.