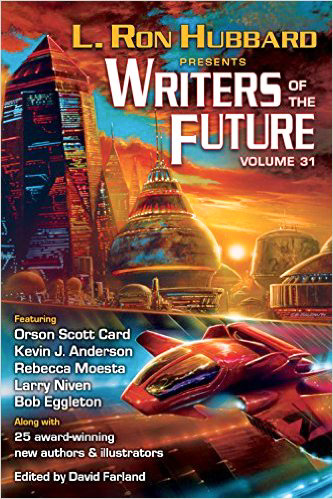 Writers of the Future, Volume 31

Has Writers of the Future really been around for 31 years? It seems like just yesterday when it was first announced. Time definitely flies . . .

Steve Pantazis starts out this year’s volume with “Switch,” about Terrence Parker, a cop investigating a cop killing that involves the use of the drug that gives the story its title. Switch speeds up your reflexes and your focus, and Parker secretly uses it to keep going despite the difficulties of the job. The investigation leads to a plan to use the drug for even more dangerous purposes. The story moves very fast, with an action-filled finale that’s a real page turner.

“The God Whisperer” by Daniel J. Davis has Jack, who keeps Zu’ar, god of death and war as a pet. It’s a thankless task: though Zu’ar is small, he is a destructive nuisance, full of bombast. The story is light with the disadvantages carried out. It’s well told and Zu’ar is a delightful character – like a talking housecat who thinks he’s in charge of the universe. A lot of fun.

“Stars That Make Dark Heaven Light” is set on a colony world struggling to get by. Henrietta is in her late teens, but for some reason hasn’t undergone puberty, and the needs of the colony mean that she needs to start finding a partner. But then she finds that some of the native life can take on human characteristics, leading to further conflict. Sharon Joss has created a well-drawn society and I liked the fact that there really were no villains, as well as some philosophical questions about what we mean by “human” and “alien.”

“A Revolutionary’s Guide to Practical Conjuration” by Auston Habershaw starts with Abe buying a book of magic in a shady bar. Abe lives in the Undercity, a part that lives up to his name, where the buildings of the upper city literally cast shadows over the poor. He needs the book as a way to help with his many problems, but discovers that magic isn’t what he thinks. I liked the social scene, as well as the way Abe has to learn how to use the somewhat smartass book.

Tim Napper‘s “Twelve Minutes to Vinh Quang” is set in Australia, where immigrants are closely regulated. Vu Thi Lynn is making a clandestine meeting to get some papers in order to get some people out of Vietnam, but the task is complicated when immigration agents show up. The main character is the type of competent woman I love to read about, and she shows a lot of resourcefulness that makes this a top-notch adventure with some clever twists.

Post-apocalyptic SF is all the rage and “Planar Ghosts” by Krystal Claxton is part of that genre, set in the US after all things have collapsed. Pup is trying to make a living scavenging in a harsh society, but has a secret: Ghost, a female figure who silently tries to guide him. After being robbed, Pup follows Ghost’s direction to an old military base with a secret. This is overall another very good SF adventure with good characters.

“Between Screens” is basically a story about moving to a new school, only the new school is in space. After having to leave Earth, the 14-year-old protagonist has to deal with the new culture and the need to make friends, including a wild girl his own age. Zach Chapman creates a thoughtful look at a high school culture of the future, though the story is a series of incidents instead of a strong plot.

I was surprised to see the name of Martin L. Shoemaker here. I had seen his byline before, and had reviewed one of his stories for Tangent and his byline has been in Analog. Writers of the Future is for unpublished authors, but it looks like Shoemaker already is making a name for himself. “Unrefined” is hard science fiction, set in the asteroid belt where Sam is the technical guy and Wilson the one who has the business sense to try to make the station a going concern. But there’s an accident that kills Wilson, and Sam has to cope with the responsibility of being a leader. The story is about that process, but I find it not particularly engaging, nor do the characters seem to have emotions (Wilson’s widow seems to get over his death far too easily). Also, a potential conflict is introduced but then just dropped. The writing is skillful, but the story could be better.

Samantha Murray‘s “Half Past” is the story of a magician’s daughter and the Echoes of his magic – versions of herself from earlier times. Elizabeth is growing up and wants to leave the house and the echoes, and is surprised when one day her dead mother walks up the path. This is a twist story, but the twist is handled well and with strong emotional content.

“Purposes Made for Alien Minds” by Scott R. Parkin is based on an interesting experiment: it’s told by a cyborg who can only speak in five-word sentences. The human race is caught in a war with aliens, and need to understand their motives. Ric slowly begins to learn about them. While the experimentation is interesting, it gets in the way of the story and I was too aware of the five-word limit to be able to get involved with the plot.

It’s more dystopia in Amy M. Hughes‘s “The Graver.” Daniel is the widowed father of teenage daughter Emma, trying to survive on a farm in a world where gravers literally take the memories of the dead as a way to get high. Emma chafes under her father’s attempts at protection, wanting to go out with her boyfriend, but that puts her straight in the gravers’ path. The story is well written and Daniel overcoming his pain is a major part of it.

“Wisteria Melancholy” by Michael T. Banker is set in a home for the Psychomorphically Unstable – people who, when faced with a stressful situation, uncontrollably change into a new form: smoke, invisibility, and something else. Jason Fuller is a new resident, the only adult and he works to try to find ways to control his propensity to become heavier than lead when frightened. This was an extremely clever “what if” and Banker created a houseful of interesting characters. It’s also a story of coming to grips with your past.

The anthology finishes with Kary English‘s “Poseidon’s Eyes.” Danae is an artist in a small seaside town haunted by spirits – wormlike shadows that magnify your fears and emotions. It’s a slice of life tale that I really didn’t find that engaging. I’m not sure why: the writing is clear, but I just never got into the story.

Overall, this is an impressive anthology, especially considering it was written entirely by new writers. Nothing about it seems anything but professional quality.