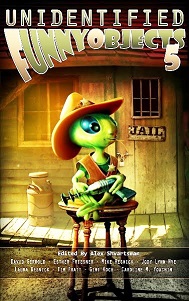 “My Enemy, the Unicorn” by Bill Ferris
“The Trouble With Hairy” by David Gerrold
“B.U.M.P. in the Knight” by Esther Friesner
“If I Could Give This Time Machine Zero Stars, I Would” by James Wesley Rogers
“The ∏ Files” by Laura Resnick
“Prophet Margins” by Zach Shephard
“The Deliverable” by Shaenon K. Garrity
“The Mayoral Stakes” by Mike Resnick
“Rude Mechanicals” by Jody Lynn Nye
“Kaylee the Huntress” by Tim Pratt
“Best Chef Season Three: Tau Ceti E” by Caroline M. Yoachim
“Won’t You Please Give One of These Species-Planets a Second Chance?” by Nathan Hillstrom
“Fantastic Coverage” by Mitchell Shanklin
“Mistaken Identity” by Daniel J. Davis
“Customer Service Hobgoblin” by Paul R . Hardy
“The Lesser of Two Evils” by Shane Halbach
“Appointment at Titlanitza” by Fred Stesney
“The Problem With Poofs” by Gini Koch

Unidentified Funny Objects 5 is a nice anthology of eighteen original stories covering both science fiction and fantasy genres. I guess a case could be made that there is at least one horror story; I’m not sure the appellation applies when dealing in humor. As with any anthology, the subjective quality is hit or miss. That’s not a bad thing—one man’s miss is another woman’s hit, and vice versa. Regardless, everyone who likes these genres will find something here to tickle their funnybone.

“My Enemy, the Unicorn” by Bill Ferris is the story of Chad, the last Peruvian chullachaqui. Able to shapeshift, he is still captive in a cryptid exhibit, on display for visitors at the Jacksonville zoo. When the keepers take a large portion of his habitat for the new addition—a unicorn—Chad decides to get some revenge. This is a very cute story about learning who your friends really are, and not judging someone for the actions of another. Chad is thoroughly disagreeable, but all the more loveable for it.

There is a maxim in government that one should always heed the law of unintended consequences. In David Gerrold‘s “The Trouble With Harry,” almost everyone forgets this is a real thing until it is too late.

In humor it’s best not to worry about the occasional plot-hole, but there is a bit of a whopper near the end that took me out of the story. Other than that, this is a nice cautionary tale about leaning too heavily on technology and science to solve a basic problem.

Cetus and Andromeda are agents of B.U.M.P. (Benevolent Union of Monsters and Princesses), charged with redirecting every young prince’s lust for war towards a more pastoral version. In “B.U.M.P. in the Knight” Esther Friesner tells the story of an agent gone rogue, and the dragon sent to extract her. Ultimately, it is a tale of love, and what that does not only to their mission, but how it is achieved.

This is a well-told story with a nice twist. While there are no belly-laughs, it is funny and engaging, and certainly worth the read.

“If I Could Give This Time Machine Zero Stars, I Would” by James Wesley Rogers is your not-so-typical time travel/grandfather paradox story told through the customer reviewer section of an online company. The Smithley Corporation’s time machine works, but better instructions would help avoid the occasional misuse of their product.

A really nice story where I saw the ending coming a mile away. Still, it was a fun read. It’s amazing the stupid things customers will do.

“The ∏ Files” by Laura Resnick is the story of federal agents Mully and Scalder as they investigate a UFO sighting. Many characters of other franchises (and three from classic movies) appear, and much (?) hilarity ensues.

This one tries entirely too hard. It feels like a mishmash of fan fiction thrown together at a late-night bull session at a con. A point would have helped.

Ryan is a prophet, but like most has no luck seeing his own future. He needs help from the Seer, but only Kim knows the Seer’s location. Kim has a problem of her own, and needs his help. “Prophet Margins” by Zach Shephard is a funny and sweet tale of their journey to their individual truths.

The jokes (as told by Kim) were truly groan-worthy up until her last, but that’s part of the charm of this story. Ryan’s goal is clear, and the resolution at the end was a slight twist I didn’t see coming. Nicely done.

“The Deliverable” by Shaenon K. Garrity is a much lighter version of The Lathe of Heaven by Ursula K. Le Guin—with coffee. Cold Brewed, of course. Told through the use of interoffice email, it follows Barb as she discovers the truth of her company’s new app.

The characters, though met only through their interaction via email, are very well defined. Anyone who has worked in an office setting (especially with software engineers) will have met each of them. I caught the issue early on, but my radar is always up. Others might not detect it until shortly before Garrity makes it clear. Either way this is a fun read.

Mike Resnick writes such cool stuff, and “The Mayoral Stakes” certainly falls into that category. Harry the bookie is taking bets on the Mayoral Election, but all the campaigns are so moribund they aren’t worth the effort. Until, that is, Gently Gently suggests a write in campaign for Bubbles La Tour. Every bet has their version of a sure thing, and Bubbles certainly fits the bill.

Great story, with loads of great characters. I love the twist at the end; though, with this crowd, some sort of double-cross should be expected.

“Rude Mechanicals” by Jody Lynn Nye is not your typical who-dunnit. Detective Sergeant Dena Malone and her partner Sergeant Ramos enter the Partland Arms investigating a murder, but find the deceased on display, and the apartment already cleaned. Only the refrigerator is talking, but it didn’t witness the crime.

This is a fun story with a surprisingly clichéd ending, and it’s all the better for it. The characters here are detailed and well fleshed-out, and that’s even better considering most of them are machines. Good and fun read.

Kaylee the Magnolia Queen is about to get the Santa Clause treatment, complete with a friendly elf. “Kaylee the Huntress” by Tim Pratt has the titular heroine finding she has inadvertently taken over a magical hunt, and it threatens to disrupt her routine. She might even break a nail. What magical folk don’t realize is a teen debutante in South Carolina is already a skilled hunter… it’s just her prey is rarely mounted on a wall.

This one is fun and well-thought out, with Kaylee perfectly suited for her new life by way of her old one. Think Buffy, the Vampire Slayer meets the Herla King, and you have the idea. Good stuff.

Lucita is finally home after months of cooking for aliens, and daughter Zoe wants nothing more than to watch her mom in action. In Caroline M. Yoachim‘s “Best Chef Season Three: Tau Ceti E” our alien overlords are the universe’s version of Mark Dacascos, and losing means becoming the next ingredient.

I couldn’t really get into this, since it kept reminding me of a Futurama episode (or ten). Much of it was funny, though, so readers with no knowledge of the show will be fine.

“Won’t You Please Give One of These Species-Planets a Second Chance?” by Nathan Hillstrom is David Brin’s Uplift Trilogy turned on its head. Earth is being caged by the interstellar equivalent of animal control, and needs to find an owner—quick—before the whole place is euthanized.

Cue the Sarah McLachlan track, but, by no means, look them in the eyes. Seriously, though, you probably shouldn’t buy a pet you have no intention of caring for. Good story, and good fun.

Mitchell Shanklin‘s “Fantastic Coverage” tells the tale of Newton Frisbitt, an insurance claims agent for the magical set. If you have had fire or water elemental damage, he’s your guy. At the moment he’s got a client with the Fantastic Threat Platinum Complete Plus Policy, and he is not having a good day.

Nicely told tale about the joys of reading the fine print. It’s always nice to see any insurance company get theirs. Fun read.

Assistant D.A. Will Walters is having a very bad week, as he is now in the crosshairs of the Night Mallard—a duck-billed version of Batman. In “Mistaken Identity” Daniel J. Davis explores the collateral damage caused by such a deranged individual who everyone else sees as a hero.

Let’s face it—Batman is certifiably insane. Anyone dressing as an animal to fight crime as a vigilante qualifies. How much destruction of innocent lives follows in their wake? This one is a lot of fun, and even explores how villains are made.

“Customer Service Hobgoblin” by Paul R. Hardy is the story of Robin Goodfellow, a hobgoblin working the call center for God (or gods, depending on your religion of choice) and he is about to have a very bad day. Every cloud has its silver lining, though, and with luck he might turn it to his advantage. Every cult has to start somewhere.

Another sad-sack screwup, and another potential silk purse made from a sow’s ear. Robin is annoying, but eminently likeable. So much so, that I ended up rooting for him. Cute story.

Here’s an oddball love story. “The Lesser of Two Evils” by Shane Halbach is the story of Ian Nakamura, a member of the IT staff at Synerlev. He’s just been given the task of guarding the demon trapped in the basement server room, but Kelly is nothing like he expected. Neither is Ralph, but that’s another story.

I love any story that shatters expectations, and this one does that for me. The action at the climax is a little rushed, but the resolution is good. Nice story, and a good read.

“Appointment at Titlanitza” by Fred Stesney is a shaggy dog of a caper story. Bruce Fenton is your average hard-boiled private detective, and he’s just been handed a mystery of interstellar proportions. Of course, the Mexican NASA and their top two (their only two) astronauts are involved, as is the requisite bombshell femme fatale.

The payoff at the end of this short was a little weak for me, considering the buildup. There are some funny lines and scenes, though, so it kept me engaged.

Jeanette Thompson-Manning is the sheriff of Space Outpost 334612, having been roped into the position when she first docked her ship. In “The Problem With Poofs” by Gini Koch, the sheriff deals with Poofs (fuzzy little balls with some un-fuzzy personalities at times), recalcitrant aliens, space cockroaches that are trying to eat the station out from under them, and a visit from the Galactic Alliance Committee. Earth needs entry into the Alliance for help with their battle with the Z’porrah, but now there’s a new sheriff in town, and the Poofs aren’t amused.

This story is rich with detail and multiple layers of character motivations, feeling more like the beginning of a novel than a short story. There is very good storytelling going on here, even if you keep thinking “those are tribbles!” Regardless of the similarities, this is a great read, and I hope to see more.

Clancy Weeks is a composer by training, with over two-dozen published works for wind ensemble and orchestra—his most recent, “Selene,” premiered in Houston on April 3rd, 2016—and an author only in his fevered imagination. Having read SF/F for nearly fifty years, he figured “What the hell, I can do that,” and has set out to prove that, well… maybe not so much. His first short story, “Zombie Like Me,” will appear in an upcoming issue of Stupefying Stories. He currently resides in Texas, but don’t hold that against him.