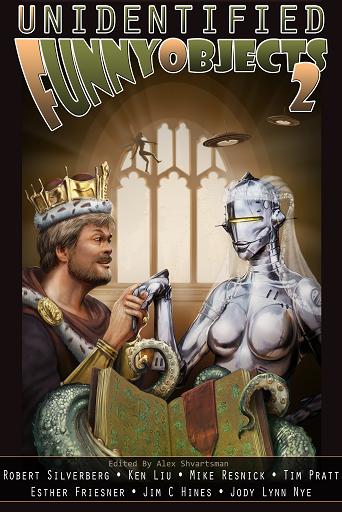 “The MSG Golem” by Ken Liu
“Service Charge” by Esther Friesner
“Item Not As Described” by J.W. Alden
“Stranger Vs. The Malevolent Malignancy” by Jim C. Hines
“How To Feed Your Pyrokinetic Toddler” by Fran Wilde
“A Stiff Bargain” by Matt Mikalatos
“The Girl With the Dagon Tattoo” by Josh Vogt
“Improved Cubicle Door” by M.C.A. Hogarth
“On Safari” by Mike Resnick
“How You Ruined Everything” by Konstantine Paradias
“Insider Information” by Jody Lynn Nye
“The Haunted Blender” by K.G. Jewell
“The Retgun” by Tim Pratt
“The Diplomat’s Holiday” by Heather Lindsley
“Congratulations on Your Apotheosis” by Michelle Ann King
“One Thing Leads To Your Mother” by Desmond Warzel
“Class Action Orc” by James Beamon
“The Wiggy Turpin Affair” by Wade Albert White
“Hannibal’s Elephants” by Robert Silverberg

A diverse and wonderfully entertaining arrangement of humorous SF/F that should find the funny bone of most any reader. Two of the stories are reprints: Mike Resnick’s “On Safari” (Gateways, 2010) and Robert Silverberg’s “Hannibals Elephants” (Omni, 1988), which has undergone minor revisions since its first publication.

When God wishes to save a planetary colony from extinction by rat in “The MSG Golem” by Ken Liu, he must convince a nonbeliever of Chinese heritage, Rebecca, that she should intervene on his behalf before the cruise ship reaches its destination. Rebecca must in turn convince her parents and the ship captain that she is neither insane nor marauding as she hunts down the hidden infestation with the dubious help of her mud golem. The text demonstrates a refreshing awareness of real life Judeo-Christian beliefs and history, which makes it all the funnier when Rebecca dives into her new role with a studiousness that her mother wishes she would apply to her schoolwork.

“Service Charge” by Esther Friesner follows two assassins on their mission to explode the dragon Naptheena’s head through sheer aggravation. The structure of this piece provides the dramatic buildup needed for the punch-line ending that almost makes you feel sorry for Naptheena.

“Item Not As Described” by J.W. Alden takes the reader through the email exchanges of a disgruntled customer of an online auction, except that in J. W. Alden’s world, enchanted blades actually exist and customer service possesses unique methods of follow through. This story is for any one who has ever wished that they could send a magic fireball through their screen.

“Stranger Vs. The Malevolent Malignancy” by Jim C. Hines is the extremely irreverent account of superhero Stranger’s battle against his own cancer while attempting to capture his arch nemesis for the good of mankind. Somewhere in the layers of painful bathroom humor and the desperation of the dying, this story shows us that cancer’s no joke, unless of course, that cancer can talk. Well crafted narrative, pacing, and structure help make this story possible for those who can appreciate dark humor.

In light of the sudden development of pyrokinesis in toddlers around the world, “How To Feed Your Pyrokinetic Toddler” by Fran Wilde should prove quite instructive. For those readers who have never wrestled a toddler into a highchair, this piece will make you grateful for that fact.

“A Stiff Bargain” by Matt Mikalatos follows Isaac van Helsing, supernatural detective – and, yes, vampire – as he takes on a prank call case that is much more dangerous than he expects. Thankfully, his foe’s sense of humor may provide him a way out, though the other villagers may not end up so lucky. Lighthearted and quirky, this story pokes fun at urban fantasy tropes as much as it utilizes them for a laugh.

“The Girl With the Dagon Tattoo” by Josh Vogt shows us that it’s not so easy to get a powerful religious tattoo when the tattoo artist is cynical and adept at verbal sparring. In fact, the entire story is dialogue-only, leaving the reader with an appropriately short scene where god-like powers are bartered about as if they were average street grub.

“Improved Cubicle Door” by M.C.A. Hogarth is a wonderfully enveloping tale of an office manager who must discover why his employee has fortified his cubicle with an attacking vine door and who knows what else. Dilbert meets D&D in this unusual comedy adventure, complete with a climactic end-boss style magic battle and a well-thought-out setting where even paperclips can make you laugh.

Two sales reps believe that they have won a relaxing vacation in “On Safari” by Mike Resnick, that is, until they meet the AI safari vehicle tasked with protecting them. Their well-intentioned guide and string of bad luck put the characters in a delightful panic in the tradition of Douglas Adams’ absurdism.

“How You Ruined Everything” by Konstantine Paradias is an engrossing second person tale showing just how badly everything can go wrong if your average, self-absorbed and overly confident Joe steals a time machine. Paradias takes the unspoken rules of time travel and turns them inside out in this piece, which could easily be re-imagined as horror. The crafty second person perspective accomplishes a tone which separates this piece from that of an amateur.

“Insider Information” by Jody Lynn Nye follows Sergeant Dena Malone’s investigation into an apparent suicide with the default help of her alien symbiont, K’t’ank. The plot is a little predictable and the humor relies on the life-or-death tension that poor Sergeant Malone must face.

In the “The Haunted Blender” by K.G. Jewell, our hapless protagonist must follow dangerous rituals to exorcise the violent spirit from the blender handed down to him by his grandfather, hopefully before his girlfriend’s book club attempts to use the kitchen. Jewel serves up an entertainingly improbable urban fantasy world where haunted appliances are an every day life-and-death nuisance.

“The Retgun” by Tim Pratt brings us two time traveling vigilantes wielding a memory altering gun, a gun that the seemingly all-powerful Prime Army has decided to wrest away for their own purposes. This tale of redemption comes with a healthy dose of interdimensional travel, intricate lies, and a seemingly hopeless situation.

“The Diplomat’s Holiday” by Heather Lindsley takes the reader to an intergalactic hotel where Diplomats can be their violent, sadistic selves without the well being of a treaty hanging over their heads. The text favors setting over plot, throwing a few interesting SF tidbits at the reader while reveling in the theme of repression turned wild.

In “Congratulations on Your Apotheosis” by Michelle Ann King, life coach Abby Fowler gets more than she bargained for when she goes against her own advice and summons a being who can predict her future. When this being takes on a more active role in Fowler’s life, the life coach finds herself envying the everyday problems now dwarfed by the presence of her supernatural visitor. Readers will be torn between sympathizing with Fowler and laughing at the obtuse scope of the problems she’s brought down on herself.

“One Thing Leads To Your Mother” by Desmond Warzel follows space officer Yates in his race against time to save the rest of the ship’s cryogenically frozen crew. All he needs is to enter his access password, which he hopes the ship’s AI psychologist can help him remember, if only the AI will stop prying into his perfectly healthy relationship with his dear mother. This story highlights the folly of human nature and places it opposite a well-rounded AI who is understandably frustrated with its limited ability to help.

“Class Action Orc” by James Beamon is told from the perspective of an incarcerated orc, Angelwood, who happens to be more clever than the rest of his species, but no less evil, landing him the task of defense lawyer for an enigmatic wizard who has made a lot of money convincing farm boys that they could be the Chosen One. Beamon makes it surprisingly easy to root for a character who, in a more reverent fantasy setting, would be the antagonist and enjoy it.  Angelwood also appears in a previous story by James Beamon, but the two stories are sufficiently independent of each other.

“The Wiggy Turpin Affair” by Wade Albert White takes us on a twisted who-dun-it escapade where a heartless assassin, Ms. Wackrill, serves as detective for an old college acquaintance, accompanied by her trusty robotic butler, Humbert. Heaps of violence drive the epically ridiculous plot in a way that your inner psycho can appreciate.

“Hannibal’s Elephants” by Robert Silverberg shows us what happens when enigmatic aliens land in New York, but don’t mount an obvious attack or even attempt to communicate with the human population that observes them in awe and fear. Meanwhile, our protagonist pursues his extramarital affair and philosophically compares the largest alien arrivals to Hannibal’s Elephants. Dryly post-modern, “Hannibal’s Elephants” dares the reader to take the characters seriously despite the comedic undertones.