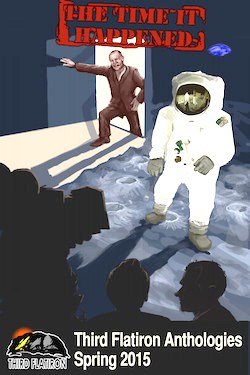 The Time It Happened:

“False Footfall” by Martin Clark takes a unique spin on conspiracy theory with its depiction of the events behind the Apollo 11 moon landing. There is a good measure of humor to this story which includes temporal psychosis mitigated by wearing a tinfoil hat. The rest of the telling involves an unseen antagonist who is reshaping historical events with an unknown motive. Much of the context requires familiarity with previous stories involving the main character, who plays the role of guide to this story’s protagonist. Unfortunately, the story is rather short on plot structure. One might expect thwarting a time-altering evildoer would involve a failure or two. Alas, the only conflict here is convincing the protagonist to take action.

Atar Hatari’s story “Lincoln’s Watch” blends a man’s obsession for the historical relic with a recurring curse. Whereas the premise of the cursed watch is interesting in the end, it comes out of nowhere, and the narrative of time keeping is difficult to follow at times. The story is disjointed in its characters and scenes, yet there is an effort of cleverness throughout. It is perhaps better suited as a script for a play and ill-suited as a short story.

“Going Viral” by Dan Koboldt is easily the best contribution to this anthology. Two virologists on the verge of losing funding discover a cancer-killing virus that turns everything around. This story is witty and engaging with proper characterization, plotting, and immersive description. Hard science fiction without being hard to understand.

Ellen Denton’s “Stilled Life” is a collection of viewpoints of characters involved in a global crisis that affects each differently. The narrative describes the characters and setting well enough to transport the reader, but the story falls short of a proper plot. Every story, even short stories, require an ending that resolves a conflict, which this does not have, and thus it reads more like an incomplete excerpt of a larger tale. The technology here, represented as a new weapon playing the antagonist’s role, is undeveloped and grossly underplayed. Facing it and resolving its conflict should have been the focus.

“Kin Carriers” by Jason Lairamore is a military science fiction piece flung far into the future, the year 2322, where Captain Gleece has been sent in a starship to execute colonists in arc-habitats orbiting Proxima Centauri for breaking the law. The aspect of their crime is vaguely defined as either a divergent scientific pathway or a social evolution. Why their scientific and cultural progression away from that of Earth’s would alienate them to the point of capital punishment is also left vague, or at the least, isn’t fully argued.

Larry C. Kay’s “What Was Lost” is a beautifully written dark fantasy about a twelve year old boy haunted by a specter with a secret from the beyond. The beauty here comes from turning impending horror into a heartwarming lesson. It leaves the reader with a taste of what life might be like without certain words we take for granted, and inspires us to make sure they’re never lost.

“Armada of Snow” by Richard Mark Ankers is a day in the life of an Empyrean orphan and his brother, albeit a memorable day that saw an abrupt alien invasion result in an even more abrupt defeat. The story could benefit from more detailed description of character and setting, hence it doesn’t transport the reader, although it does develop the protagonist’s internal struggle. Plot seems to take a back seat here or perhaps got locked in the trunk. The beauty of this story lies in the metaphor of winter represented by a blue sky turned gray with falling starships.

Thomas Canfield’s “Puppy Love” is a humorous imagining of the Federal Bureau of Investigation’s reaction to the Russian’s launch of Sputnik. The Chief of the FBI is under pressure to answer American’s concerns. Relief comes when the FBI traces a radio signal to the backwoods of Iowa where someone is communicating with the mysterious satellite. The prospect of capturing a Russian spy posing as an American is just what the FBI Chief needs, but the nefarious spy isn’t what they expected, nor are his motives for communicating with Sputnik. This is a fun read, but it’s a period piece set in the late 50s. The dialogue and narration, however, have a modern flare at times inconsistent with the mid-twentieth century. Also inconsistent is the ignorance and unfamiliarity the characters express with radio communication. Such technology was readily used during the time. The story gets a pass for the satellite being able to receive comm, store it, and transmit it again later. It is after all a work of fiction.

“Good to the Last Drop” by Wendy Nikel is an interesting metaphor for narcotics. The drug in question here is the coffee bean, and it’s no longer available. Why the bean is no longer available is excluded from the story to its detriment. Nikel introduces a number of characters all craving caffeine and its stimulating effects. Shenanigans ensue, culminating in a shared scene, and an ending that suggests everyone is corruptible in the vacuum of even the most benign indulgence.

Evan Henry’s “With Gilded Wings” creates a tale about a unique alien life form. At least, I’ve never come across whales that leave their home world under their own propulsive forces and sail the interstellar cosmos on fins adapted to catch the stellar winds. Witnessing such an event in the night sky would be memorable indeed. Such is the case for a grandfather seeing the century long migration for the second time with his grandson for his first. Anyone who’s stared up at the stars or stayed up late to see a rare astronomical event will resonate with this heartfelt tale.

“Net War I” by Elliotte Rusty Harold attempts to tell a story with only two of the three necessary components. The tale lacks a single character. Thus we read a history piece about cyber hacking leading to a world war that’s fought with firewalls and antivirus software rather than weapons and troops. The back and forth struggle between countries to break through their enemies net defenses may serve as a metaphor for World War I, but it didn’t come across that way. Instead, it seemed to suggest that in the future governments at war with each other will simply attempt to out hack their enemies and ignore an arsenal of other strategic weapons from trade sanctions to kilo-ton bombs. To be believable, that idea needs to answer why these governments aren’t fighting a traditional war in parallel with cyber-attacks–and at least one character to feel something about.

Neil James Hudson’s “A Rock in the Air” uses the principle of simple harmonic motion and Hiroshima to create a story about love, responsibility, and the wisdom gained through time. When the atom bomb detonates over Hiroshima in 1945, Hideyoshi Kita has none of these. He’s too busy running away, abandoning friends and family, but somehow Kita lives. He’s hurdled through time, and years tick by in seconds. As he begins to slow down, he discovers he was found and cared for by an Army nurse, but they both know that Kita will eventually stop in time at the height of the pendulum and begin moving backwards. As this turning point nears, the nurse expresses her feeling for him physically. Afterward, Kita swings back and forth through time, always avoiding his home on the date of the bomb, until he finds the wisdom that had escaped him on that fated day and turns toward Hiroshima without regret.

Mark Hill’s “The Zzzombie Apocalypse” sets the story straight on the dangers of ‘mindless, slow-moving monstrosities’ with humor and sarcasm. The main character debunks the inglorious tale of dramatic escapes and honorable sacrifices that arose after the short-lived event turned out to be quite lame. The author’s contempt for the subject is delivered with enough flare and humor to cause all but the most diehard dead fans a lively chuckle.

“Xenofabulous” by Amanda C. Davis tells a quick tale about a fashion designer who has lost her inspiration. She fears being forgotten. Her assistant is distracted by the looming footage of the Hermes probe, a long-running UNASA endeavor that had yet to discover life on another world. The fashion designer had never even heard of it and turns it on out of boredom. When the footage reveals an alien world teaming with aliens, the assistant is overcome with tears of joy, but the fashion designer is overcome with inspiration.

As an anthology, The Time It Happened sought to bring together stories of memorable moments, events that everyone remembers where they were when those events occurred. To this end, the anthology is largely successful. A couple stories even become memorable themselves: “Going Viral” by Dan Koboldt and “What Was Lost” by Larry C. Kay. The former is a great example of hard science fiction; the latter is a great example of dark fantasy.

Ryan Holmes is a Marine Corps grunt turned aerospace engineer for NASA’s Kennedy Space Center and writes science fiction and fantasy in life’s scant margins. You can find his blog at: www.griffinsquill.blogspot.com