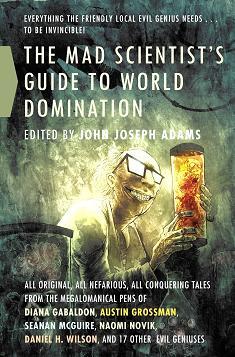 “Professor Incognito Apologizes: An Itemized List” by Austin Grossman
“Father of the Groom” by Harry Turtledove
“Laughter at the Academy” by Seanan McGuire
“Letter to the Editor” by David D. Levine
“Instead of a Loving Heart” by Jeremiah Tolbert (reprint)
“The Executor” by Daniel H. Wilson
“The Angel of Death Has a Business Plan” by Heather Lindsley
“Homo Perfectus” by David Farland
“Ancient Equations” by L. A. Banks
“Rural Singularity” by Alan Dean Foster
“Captain Justice Saves the Day” by Genevieve Valentine
“The Mad Scientist’s Daughter” by Theodora Goss (reprint)
“The Space Between” by Diana Gabaldon (reprint)
“Harry and Marlowe Meet the Founder of the Aetherian Revolution” by Carrie Vaughn
“Blood & Stardust” by Laird Barron
“A More Perfect Union” by L. E. Modesitt, Jr.
“Rocks Fall” by Naomi Novik
“We Interrupt This Broadcast” by Mary Robinette Kowal
“The Last Dignity of Man” by Marjorie M. Liu
“The Pittsburgh Technology” by Jeffrey Ford
“Mofongo Knows” by Grady Hendrix
“The Food Taster’s Boy” by Ben Winters

I love superheroes and supervillains and was excited to hear about the delightful title of The Mad Scientist’s Guide to World Domination, which sounds right up my alley with the concept. The result is 20 stories (with three reprints, not reviewed) on the theme.

The anthology starts out with Austin Grossman‘s “Professor Incognito Apologizes: An Itemized List,” where the mad scientist in the title gives a long explanation of his motives and plans to someone who has entered his secret lair. It’s cleverly constructed and the note creates an attractive and vivid character.

“Father of the Groom” is almost pure slapstick as Professor Tesla Kidder, a genius with no concept of good social behavior, overhears a description of his son’s fiancée as being a “Bridezilla.” This inspires the professor to do something about it. Harry Turtledove‘s story is fast and funny, with the proper amount of silliness.

Things are slightly more serious (in a pulpish way) in “Laughter at the Academy” by Seanan McGuire, where there’s an official name for the mental makeup of mad scientists: “Shizotypal Creative Genius Personality Disorder” or SCGPD. John Secor is a policeman who is investigating an outbreak of the disorder among scientists, only to find a common cause. As is fitting for this anthology, this is a plot straight from comic books, but I do like that sort of plotting and thought the story not only had a good mystery, but also a good twist.

David D. Levine‘s “Letter to the Editor” describes its structure, as Doctor Talon writes a letter talking about his side of the story, and how everything he’s done was to save the world from the so-called hero, Ultimate Man. I liked the switcheroo, especially since Doctor Talon actually comes up with some smart ideas and concepts to fix the problem.

Phillip Drake is one of many heirs to an old man’s fortune, runs the “The Executor,” a computer programmed to amass as great a fortune as possible. The result of a rich man’s madness, the fortune has created a war going on between the heirs – literally. Drake needs to find a way to end the reign of the Executor by finding a worthy heir. Daniel H. Wilson has an interesting setup and an elegant solution to the problem.

I really enjoyed Heather Lindsley‘s “The Angel of Death Has a Business Plan,” about a consultant/life coach to supervillains who is looking for a way to advance on to something more. Angie is a likeable and cynical woman with a nice sense of humor and who gets the most out of the situation. The story plays with pulp conventions, with a great ending that was logical and completely unexpected.

“Homo Perfectus” is an account of an evil corporate personnel director seducing a woman by using mad science discoveries. I didn’t much care for David Farland‘s story; it’s ugly, having the main character attempting a form of date rape, and leads to an anticlimax that didn’t work for me.

“Ancient Equations” is the story of Ernest Lassiter, a genius who only has contempt for modern society and who comes up with a plan to do something about it. L. A. Banks spends far too much time going over Lassiter’s past and dislikes until he gets to the meat, an idea worthy of a page or three, but not 13.

Alan Dean Foster has fun with the concept of an idiot savant in “Rural Singularity,” where reporter Pat Gilcrease travels to an out-of-the-way Texas farm to track down a report of two-headed chickens. The chickens are the result of the work of Suzie Parker, an adolescent girl who has a knack for making strange inventions. The story is lively and a lot of fun.

“Captain Justice Saves the Day” is less about Captain Justice, or his archenemy, Dr. Methuselah Mason, as it is about Brenda Bryce, who works as his administrative assistant. Brenda is the level-headed sort, whose down-to-Earth and practical advice – as well as her editing skills – are essential to the working of a superhero’s or villain’s career. Genevieve Valentine concentrates on the absurdities of the trope, and creates a character who is probably more a hero than the Captain, just by being efficient.

“Harry and Marlowe Meet the Founder of the Aetherian Revolution” by Carrie Vaughn moves into steampunk territory as the two title characters go to meet Dr. Carlisle, who invented the Aetherian mechanism, a new type of power supply. Carlisle is under house arrest after being responsible for a disastrous explosion, but Harry and Marlowe suspect he is up to no good. This is a straight adventure story, with a horror twist. I did like the character of Harry as well as the details that made it a good read.

I had a very hard time getting through “Blood & Stardust.” It’s a long, rambling musing about a woman who is the result of the work for Doctor Kob, a Dr. Frankenstein analog. She talks about her life, her aspirations, the circus, lightning, and all sorts of subjects, but I never felt that Laird Barron gave the story any coherent narrative. I do like the character, and some of the events are interesting, but overall the story is very forgettable.

“A More Perfect Union” is based upon a clever concept: a mad political scientist. Alas, the story by L. E. Modesitt, Jr. suffers from being purely exposition, as it explains how the narrator takes a politician and makes him the supreme leader in a future North America changed by global warning. There’s a lot of “and then I did this and then we did that” and the characters don’t come to life. This type of structure can be done well, but in this case I found it all pretty tedious.

Alexander Bane is the mad scientist in “Rocks Fall” by Naomi Novik, a story set in the aftermath of a fight between him and Ellroy, where Ellroy ends up trapped with Bane in a cave. The story slowly reveals Bane’s plans — which aren’t evil, though Bane is willing to use any means necessary to achieve them. I did like the conversation between the two men and the situation.

It’s a move to alternate history in “We Interrupt This Broadcast” by Mary Robinette Kowal, where Fidel Dobes is working on a computer program – punchcards and all – in the early 50s Pentagon, where Thomas Dewey is president. Fidel had worked on the Manhattan project and has a plan to make sure things don’t get worse. The story is ultimately a love story, though I have a bit of an issue with the morality of it all. Still, it’s well-crafted and holds your interest.

The protagonist of “The Last Dignity of Man” is Lex Luthor – not the one in Metropolis, but a rich industrialist who had modeled himself on the comic book character. He’s working on a project for the government to clean up pollution by the use of genetically engineered worms, an idea that the reader knows is not likely to work out. But the story is about Lex and his obsession with Superman as well as his desire to be both liked and powerful. I enjoyed Marjorie M. Liu‘s story, partly for the conceit, but partly for the way is portrays Lex as a confused and lonely man.

After an alternate Lex Luthor, it’s nice to see an alternate version of one of my favorite supervillains, Gorilla Grodd, in “Mofongo Knows” by Grady Hendrix. Mofongo is a superintelligent ape with mental powers who is growing old and has ended up as a sideshow attraction with his old nemesis Steve Savage, formerly a Tarzan analog, now an alcoholic. Mofongo’s plight is surprisingly touching as he has turned from a potential world conqueror to an ape stuck in a cage.

The anthology finishes up with “The Food Taster’s Boy” by Ben Winters, a story of considerable ugliness. C. is a despot in control of all Earth, but is dissatisfied and tries to set up someone to challenge him, focusing on the son of one of his food tasters. He then traumatizes the boy in order that he will grow up to try to depose him. I didn’t particularly care for the casual cruelty, and the plan didn’t make much sense.

Overall, this is an entertaining anthology that, despite the limited concept, managed to come up with different views and perspectives. It may not have any award winners, but there’s plenty of good reading here.

Chuck Rothman has stories out in the anthologies Unidentified Funny Objects, Mortis Operandi, and Futuredaze.