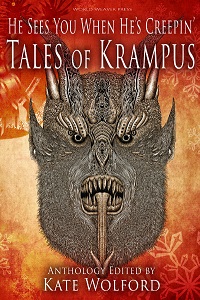 He Sees You When He’s Creepin’ – Tales of Krampus

World Weaver Press’ editor Kate Wolford offers He Sees You When He’s Creepin’ – Tales of Krampus, a collection of twelve original short stories about my favorite Christmas character. I first heard about Krampus studying freshman German in high school. As Christmas approached, education in the culture of German speakers brought us to Austria, where Krampus looms large in parades and festivities. Thirty years later, I remember Frau Hagerty struggling to explain Krampus to students she’d told German-speakers’ minds were clear, logical, and rational.

In short, I had to go learn about Krampus myself, and have loved Krampus ever since.

One of the great delights of Krampus is that, as a loner and outsider charged with delivering cruel fates to the wicked, there really are no social limits on Krampus. Krampus cares about social graces about as much as the honey badger does. Less, maybe. And, the awful things he does for Saint Nick? Kinda makes you wonder about Saint Nick. Is there anything Krampus can’t darken? Definitely deserves its own anthology.

Stephen Grimm’s “Villainess Ascending” reimagines Cinderella in a myth-driven world in which Cinderellas recur from age to age and old gods and their ancient allies eke out a marginal existence in the shadows of more modern religion. Two nights of royal balls may have left Cinderella eager to clinch the deal on the third, but they’ve also left her a lot more cynical – not at all the girl whose innocence attracted divine favor at the outset. When her fairy godmother can’t make the third night, Cinderella presses Krampus into service … not just to clear out her wicked stepmother, but to get through the awful blizzard to the last night of the ball with a costume sufficient to make her way past the footmen. Cinderalla’s elevation from an angry, self-indulgent, petty gold-digger to an angry, self-indulgent grand villainess may lag briefly in places, but it’s wonderful to see her wreak such large-scale havoc as she comes into her own as a capital-P Power. Despite some elements that work against it, the story wins in the end by giving Cinderella what the original was always denied: real agency. Day-yum.

Lisa Marie Redmond’s “He Sees You When You’re Sleeping” is an urban fantasy that follows a coffee shop owner who, ever since aiding a fairy queen in danger, has been able to see supernatural creatures. And they can see him: his back-of-house operation depends on elf bakers, the Morrigan visits to order drinks, and he recognizes all too well the symptoms of supernatural interference when his mail carrier tells him about the trouble his son is having on December 5. The strength of Redmond’s piece is its humor: misunderstandings and unexpected juxtapositions lighten the story and make the pieces fit together. It’s hard not to love Ashley, the rude and furious yoga-practicing barrista who drops completely insincere apologies when busted arriving and leaving with disdain for the shop’s schedule. And it’s easy to snicker at Santa’s beer gut in his red gas-guzzling SUV, particularly when Ashley tells him he needs to work on his core. You may come for the Krampus, but you’ll stay for the laughs.

Beth Mann’s “Santa’s Little Helper” presents a first-person account of Krampus’ crummy job. Pressed into service under a despicable master, to do work the narrator doesn’t believe in, our hero suffers every indignity his employer Nic can devise. Mann’s vicious, shallow, entitled Nic is the perfect hypocrite Santa to hate. The narrator’s desire to get out of the punishment business provides a solid, understandable motive. Perhaps the story could move faster, but Mann makes sure readers hunger for Krampus to triumph over the wicked saint. Also: sinners may have a place in the grand scheme after all. Lighthearted fun.

“The Business of Christmas” by Anya J. Davis is a third-person fantasy set in a world where a hypocrite glory-hog Santa has escaped his duties (and ruined no small number of elves) converting the magic of Christmas into a commercial operation, having frozen out his one-time partner through such tricks as employing a smear campaign to suggest Krampus eats children, and eventually erasing her from the stories altogether. Setting the holiday right requires Krampus to arrange a complex scheme involving surreptitious visits to secret hidden bases, mortal complicity, elves, and – of course – magic. Krampus the witch fights to restore Christmas – but is Santa’s lock on the holiday too much, and his profit machine too powerful? The more you loathe the holidays’ commercialization, the more you will love Krampus’ plan to overturn the applecart. No children were eaten in the making of this story. Warning: you may cry a little.

EJ Hagadorn’s “Schadenfreude” is a first-person story from the perspective of a Krampus who loves and believes in his work. Krampus relates a hard case from another century in a kind of why-I-am-in-the-business tale, sure to warm your heart with a spoiled brat’s misery. Bonus points for a custom-fit curse.

S.E. Foley’s third-person short story “Family Tradition” follows a disaffected teen skeptical of her father’s story that the family avoids Christmas decorations because of an Old World curse he’s dodged since, in a childhood fit of pique, he dumped the cookies and beer his grandma left out for Santa. She thinks it’s likelier her dad’s just making an excuse to cover for the fact they’re just too desperately poor to decorate the trailer. This year, she means to enjoy some holiday decoration. You’re reading a Krampus anthology, so you know the Old World curse will be real, and what kind of disaster follows. Can a bad boy grown into a despicable man dodge his fate again – or will Krampus accept only the flesh of children…?

In Brad P. Christy’s “Krampus: The Summoning” a wise old woman relates a Krampus origin story to a boy beset by bullies. The story’s structure parallels those fairy tales in which a virtuous hero(ine) is not saved by a difficult choice that proves the character and mettle of the main character, but is instead delivered by divine reward. For this reason, the story may not appeal to readers who demand characters make hard choices to win, or who don’t feel invested in the virtues reinforced by the story. If you like the idea of pagan powers getting their due from hypocritical Christian proselytizers, you’ll like Christy’s Krampus. Instead of a creepy horror or a comic rendition, “Krampus: The Summoning” serves up a Krampus of righteous vengeance – and if you like divine vengeance this may just hit the spot.

If you love stories about secondhand-shop bargain finds that turn out to be powerful cursed artifacts, Ross Baxter’s “The Outfit” is for you. This comic-horror parcels out trope after horror trope, keeping you guessing which way the story will go while you wonder just how it’ll all go off the rails. The main character may offend you (hopefully), which is sort of the point. The climax’ abrupt reveal is worth the journey. No innocents were harmed in the making of this story.

Nancy Brewka-Clark’s comedy “Family Night” depicts an evening in the life of Krampus at home, complete with scheming wife and a teen son learning to play a gift electric guitar. The piece shows characters delighting in their own foul temperaments, and Krampus gets some perspective on the plight of parents. The humorous situations easily earn smirks, but readers who want to see characters make hard choices and change may feel a stronger climax was teased and not delivered: Krampus doesn’t make a hard choice, but is dragged from the precipice of a hard choice by the women who dominate his life. Of course, that is in itself good fun.

Tasmin Showbrook’s “A Winter Scourge” follows a divorced British cop on her Christmas holiday without the kids at a newly-deceased relative’s home in Orlando. The strong character of Detective Chief Inspector Hazel Helmsley shows clearly through Showbrook’s prose. Unfortnately, DCI Helmsley is not so much the protagonist of the piece as a witness, much as Watson might observe a story about Sherlock. Once all the players are introduced, it becomes evident that the real conflict is between an angry Krampus and his elder sister Nicola. This development robs the story of some of its force: the point of view follows Helmsley, whom we watch during the rising action as she prepares to sort out problems with her deceased mother’s estate and her distant children. The stakes involved in the story’s action turn out to be between the quarrelling siblings, largely unrelated to DCI Helmsley. Helmsley’s problems turn out to be solved as a gift, without her being forced to make a hard choice or sacrifice; despite being a success in her professional life, and demonstrating initiative when surprise interrupts her plans, she is ultimately deprived of agency in favor of supernatural beings who whip up a happy ending by magic. Krampus’ plan for retirement, his conflict with his sister, and the stakes and decisions in the story’s climax might have been easier to understand from the point of view of Krampus or Nicola. DCI Helmsley is a delightful character and I’d love to see a story about her – and maybe even her relationship with Krampus, who learned about her while living with her mother – but this piece doesn’t seem to be that story. It’s nice DCI Helmsley gets a happy Christmas but I’d rather have seen her earn it.

In “Bad Parents” E.M. Eastick follows Krampus, unwillingly recalled from retirement to coach a parenting class: the problem isn’t that the awful children need to be carted off in a bag and destroyed, but that their parents need coaching. The problem doesn’t seem urgent to Krampus, who also shows little real anger when strangers intrude on his retirement. The stakes feel low. Try/fail cycles involving townsfolk who mass at Krampus’ country home for parenting classes sounds like a setup for comedy, but they primarily showcase the author’s view on the root of problem misbehaving children. The author’s view is surely correct – awful children probably are more than anything the result of adults’ neglect or their outright hostility toward each other, the environment, and the children themselves – but these facts aren’t by themselves enough to make one enjoy a writing. Eastick’s strongest element is the catalog of awful misdeeds the townsfolk’s vicious brat children visit upon their victims. The entertaining details aren’t crucial to the plot, though, and don’t flow often enough to carry it. By the time Krampus seems invested in the townsfolk’s parenting – to keep himself from being hauled out of retirement to bag evil kids –it feels too late to build reader interest in the result. The punishment-is-a-lazy-substitute-for-caring lesson is a fantastic theme to work with; everybody has experience with it. The everybody-loses conclusion is a perfect ending for a Krampus story. So much was right with this that I wanted to like this much more than I can claim I was able.

Jude Tulli’s “Memo from Santa” is a comic announcement of new wish list guidelines in a world increasingly crowded with children and their extravagant gift requests. Tulli has a great take on Krampus and his role in Christmas wish list processing. The density of gags is perfect for a humorous piece – DENSE. Everyone should read the new guidelines for Christmas wish lists now that Dr. Krampus has been hired to evaluate them for response. With so little time until the big day, you can’t get started too soon.